Harnessing the Harassment of Human Fears 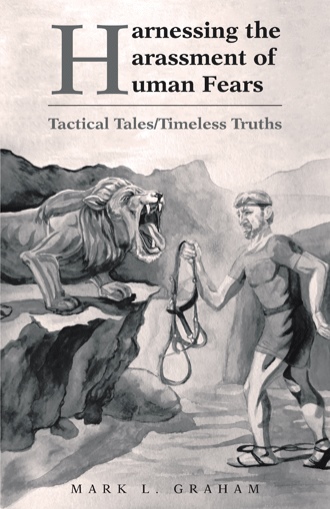 the Experiences of Fear

So, there we were. My sixteen year old son, Nathaniel, greeted me at mat side where I had just emerged unscored upon in tournament competition and champion of the Watkins Glen Wrestling Festival at the ripe old age of forty-four! “Go for it, Dad,” my son said, “enter another tournament!” But I reminded him of the difference between us---“when you finish a wrestling match,” I told him, “you’re looking for oranges, but when the buzzer ends my bout, I’m looking for oxygen!”

In reflection, wrestling has played a big part in my life. Fulfilling a boyhood dream by making the high school varsity team, to winning a national collegiate title, the sport ran through my blood; it drew out my deepest emotions--- but, also, my deepest fears. You see, the truth is, this athlete struggled with claustrophobia and behind every opponent was the ominous fear of being held down, pinned down, or tied up. It was a secret; a personal battle that I endured throughout the eight years of my wrestling career. It seemed the culprit of several defeats and, at times, the reason for advantage as I scrambled frantically to get loose. Truly, this raw fear was the greatest challenge of my sport’s experience! Fear was the unwelcome phantom.

Make no mistake about it, the experience of fear is real; the encounter is unnerving and traumatic. The episode is, from all appearances, unlike any other form of suffering. The phobic reaction is like an invisible force which grips the heart of human feeling and sense, leaving the sufferer strip- ped, defeated, washed up and wrung out. The crude and cruel aspect of one’s battle with fear is the haunting awareness that this opponent is ever stalking, always lurking, unrelenting, and overpowering. Like a personal tour of the gas ovens of Auschwitz, a visible reflection of the fearful episode indelibly etches the horror into one’s mind, making recovery, at least from the sufferer’s angle, a virtual impossibility. To this belief, most sufferers will readily admit.

Personally, and in my experience of helping those who fear, the stimulus of fear is multidirectional, sometimes complex and hard to figure---- making the fear episode feel unique and impossible to overcome. As we will discuss later in our read, these fearful experiences are amazingly similar at their core, symptomatically calculated, and generally in concert with what we might expect from a fear episode (I Corinthians 10:13). The triggers, however, may be radically diverse and multi-directional. As there is but one true sense behind any biblical narrative (II Timothy 2:15) , so, fear is the unmistakable force behind a plethora of stimuli from the context of life.

The following list is a brief overview of irrational fears, along with their categorical identity/stimulus.

A. Acrophobia – fear of high places.

B. Agoraphobia – fear of large or open places.

H. Monophobia – fear of being alone, without other

I. Nyctophobia – fear of darkenss.

Like a balloon, the fear episode is inflated by fearful, redundant reasoning. As the triggers incite feelings of helplessness and panic, the painful experience is heightened. Remember that the stimuli is diverse and shows up on life’s doorstep whenever and however; but, bottom line, fearful, cyclic thinking pumps energy into irrational fears. Truly, and in the words of Franklin D. Roosevelt, “The only thing we have to fear is [the] fear itself.” In our case, the issue which must ultimately be addressed is the ‘fear’ and the way we think about fear, for the stimulus is never the fundamental issue; the stimulus is simply life.

My pastoral ministry has spanned nearly forty years, during which time I also taught biblical counseling at the seminary level and directed the Genesis Counseling Services. Obviously, my labors took me to church pulpits, school chapels, and numerous radio opportunities. I’ve also enjoyed a limited number of conference engagements, addressing both pastors and parishioners. God’s calling on my life and my serving Him in this capacity has been the ambition of my heart since coming to Jesus at the young age of nine. There is nothing else in life for which I am better suited than serving the Lord as a shepherd, yet, there have been few challenges in life that I have found more difficult than public speaking. Yes, you’ve probably guessed it. I have encountered the fear of stage fright. Although I cannot recollect my original conflict, I do recall an increasing struggle when speaking from my regular church pulpit sometime after the first ten years of pastoral ministry. I remember losing my place often in the sermon presentation. My thoughts seemed scattered as I typically honed in on what part of my message might “throw me” or send me into a full blown fear episode (where my mouth became dry and my verbiage more breathy). I was keenly aware of blushing and of how people might be perceiving me at that moment. Interestingly, those who know me most, my wife and family, observed only slight indications that I was emotionally “off course.” The fear experience became so intense in my head, however, that I came to the place where leaving the ministry was a very real consideration. You see, though my raging battle was hardly recognizable to others, it meant a continued agony for me and something I honestly felt I could not handle without eventual emotional breakdown or heart failure. Of all the thoughts rushing through my head, the most prominent was pre-occupation! The fear of my fears seemed inescapable, always there, night and day, occupying my tomorrows and whatever my speaking assignment might entail. i.e., public prayer, small or larger group devotionals, Bible studies, funerals, weddings, class settings, pulpit ministry, interviews, etc.. Any situation where I opened my mouth in the presence of others could incite an episode so discomfiting that I thought to run, to hide, to avoid, to quit! Truly, I was dreading life more with every passing day.

Now, I share these things for no other motivation than to come along side those who have mutually suffered and provide viable assistance. The reader who has known the heartache that fear brings will identify with the pain of a common human experience. The reader will also peer between the lines and envision the context of the dreaded adversary we call fear. It is here where the embattled must not reside, remain, or root. Even identity, mutual experience and commonalities may adversely affect the fearing heart if one chooses to focus on the episode as an end in itself. Searching for the perfect depiction of one dilemma, hunting for one’s diagnostic label or developing a network of victims anonymous may do nothing more than consensually reinforce the stimuli for fear --- heightening the episode.

Helping those who fear is the intention of this manual. The question that must be asked at this juncture is the one Jesus asked an afflicted man many years ago: “Do you want to be healed?” (John 5:6) . And what kind of question is that, after all? What sufferer wouldn’t want the obvious?

Are you weighed down by oppressing phobias? You can harness your fears with the tactical help of timeless truths. In this guide, author Mark L. Graham explores his lifelong struggle with various fears in an effort to help others find hope, comfort, and godly wisdom. He seeks to help you change the way you approach irrational fears. By looking to the Bible for guidance and exercising faith in Jesus Christ, you can: understand your weaknesses and vulnerabilities; fend off fears that have no basis in reality; and harness legitimate fears to achieve great things. With surprising candor, Graham shares the fears he has faced as an athlete, pastor, and person. Step by step, he shares faith-based strategies and proven steps to overcome the fears that hold you back the most. Instead of trying to eliminate fears with a chemical fix, mood-altering drug, or caffeine high, it’s time to do what God intended you to do: master your fears at every turn, time and time again. By doing so, you’ll move closer to the Lord as you start Harnessing the Harassment of Human Fears.

Mark L. Graham has pastored local churches for almost forty years. He is the founder of the Genesis Counseling Ministry and was for many years an adjunct professor of biblical counseling with the Empire State Baptist Theological Seminary. Pastor Graham lives with his wife, Diane, in Cazenovia, New York, and shepherds the Grace Bible Church in nearby Fayetteville.