My Journey with Fibrosing Mediastinitis 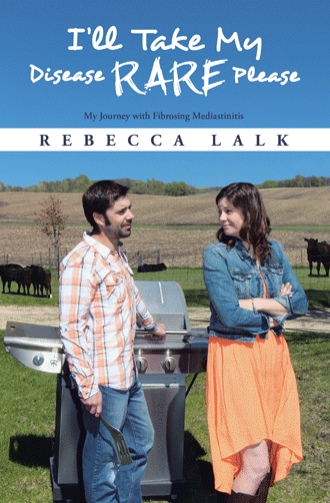 Unable to hold my breath any longer, I pulled my head up from under the water. It was a beautiful summer day; what better way to spend it than sitting outside, soaking up the sun, and listening to the birds chirping off in the distance?

I was out in the backyard relaxing in Skyler’s baby pool, counting how long I could hold my breath underwater while she napped inside. It was just something silly I was doing to pass the time, a mild amusement on an otherwise peaceful day.

Just as I was about to dunk myself under for another attempt, I heard the phone ring. In a rush, I jumped out of the water and dashed into the house, hoping simply to catch it before the ringing woke Skye. I had no idea how drastically this one phone call would forever change my life. At least, not until I heard my doctor’s voice on the other end.

For most of my life, I had been relatively healthy. There had never been any broken bones or surgeries, and I had always been active. Until now, the only blip on my medical radar had been my diagnosis with juvenile diabetes my junior year in high school.

I was seventeen when it happened, young enough to not fully understand the severity of what I was dealing with. It was my mom who had broken out in hives at the news, instantly worried and knowing I would be facing a lifetime of watching my diet and monitoring my blood sugar levels. Not to mention I would need to give myself daily injections, needles now a necessity for keeping me alive.

That was also the first time I had known my dad to cry, as Mom would later tell me he had left my hospital room to go out in the hall for that very reason. Even my younger brother, Ryan, and my older sister, Michelle, seemed worried. Really? I thought. What’s so bad about this? I mean I lost fifteen pounds in three days!

To my teenage mind, that was a silver lining if ever I had seen one.

I struggled off and on with managing my diabetes those first few years, just wanting so desperately to be “normal.” I even went as far as having my boyfriend or friends check their blood sugar for me, just so I could use their results to keep my mom from knowing if I had skipped a shot. It wasn’t that I enjoyed the repercussions of missing injections; it was just that giving myself four shots a day felt ridiculous. I didn’t want to be that girl. I didn’t want to be sick.

Of course, I quickly learned that diabetes was not a joke or a diet plan. It only took a few instances of passing out for me to realize that if normality was what I wanted, I had to follow the rules. And as much as I hated it, I eventually tried to make the most of it. Mom had always said God blessed me with a sense of humor so that I could get through the trials in life. In this case, that turned out to be true. When I couldn’t hide the illness, I laughed about it.

Turn everything into a joke, and it can’t hurt you, right?

A few weeks before this call that would turn my world upside down, I had gone to the doctor as a formality more than anything. I didn’t feel all that terrible, but I had been dealing with this cough that just refused to go away. I assumed it was the lingering effect of some cold and that I might need antibiotics to clear it all up. The doctor had seemed to be of the same mind-set, sending me for a chest X-ray just to make sure I didn’t have pneumonia. But now, he was on the phone saying he wanted me to come in for more tests. Those X-ray results had just made their way across his desk. There was a mass on my right lung.

“Is it cancer?” I asked, torn between my need to know and my desire to continue living blissfully unaware.

I hung up the phone and sunk down to the floor, waves of shock washing over me. I was only twenty-seven years old. This didn’t make sense. I wasn’t even a smoker. My beautiful little girl, Skyler, had just turned two. Her father and I were in the middle of a divorce. So much of our relationship was damaged beyond repair. But there had been relief in our separation as well: a promise of a life I could reclaim and begin living as the person I knew I was. The person I wanted my daughter to see me as. Everything I did, every ounce of my being, was about a commitment to her. My little girl. My baby. The light of my life.

Cancer was not an option. It just … wasn’t.

In 2002, diagnosed with an extremely rare and life-threatening disease—fibrosing mediastinitis—at the age of twenty-seven, author Rebecca Lalk was told the average life expectancy with this condition was ten years. Doctors knew very little—there was no cure, and limited treatment options were available.

In I’ll Take My Disease Rare, Please, she shares her journey dealing with the diagnosis and the disease that affects only 600 hundred people in the United States. She narrates how her illness began to attack with a vengeance leaving her to fight extreme fatigue, chest pressure, memory loss, head rushes, along with the chronic cough that began to overtake her life. She looked healthy, but nobody listened or took her seriously about the severity of her symptoms.

This memoir tells Lalk’s story full of perseverance and determination. I’ll Take My Disease Rare, Please describes how the diagnosis led to a new spiritual awakening, and how she was spurred to push forward with faith, family, and her sense of humor. Lalk’s determination also led her to one doctor who was able to help her and who told her to go live her life. With God’s grace, Lalk has done just that. She has since outlived that diagnosis by three years and has been referred to as a walking miracle.

Rebecca Arends Lalk grew up in Cedar Falls, Iowa, and now lives in Waverly, Iowa, with her husband, Tim, and their four children. She works full time as a social worker. Lalk shares her daily health challenges and triumphs on her blog at Rebecca1010.com.