Living in the Spirit 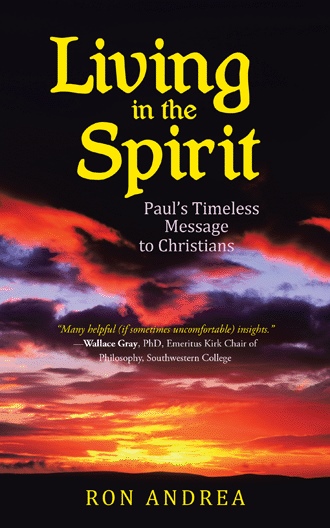 Living in the Spirit

"Paul, a servant of Christ Jesus, called to be an apostle and set apart for the gospel of God." (1:1) Paul opens his letter with this expansion of the common greeting format. The Roman Christians know Paul only by reputation, if at all. Both his calling and his separation underscore his qualifications to boldly address his readers. As related in Acts 9:3-6, the Lord Jesus Christ called Paul directly. Immediately afterward (Acts 9:15), the Lord sent Ananias to tell Saul, as he was called then, that he was to be "his chosen instrument to carry my name before the Gentiles and their kings and before the people of Israel." Before his conversion Saul was a Pharisee, which means one separated. As Paul, he felt himself separated to preach the gospel to those who had not yet heard it, specifically to the Gentiles. "It has always been my ambition to preach the gospel where Christ was not known, so that I would not be building on someone else's foundation." (15:20)

The good news Paul proclaims is still available to and needed by all people. Many who already claim Jesus Christ as Lord don't know him or all that he did for them any better than those who haven't heard or who have rejected the gospel. Paul argues that God supernaturally provides for us--for all fallen humans through the sacrificial death and resurrection of Jesus and the continuing presence of the Holy Spirit.

Because he does not know these people in Rome personally and they may not know him, Paul starts by detailing his relationship to Jesus and his office in the church. He especially reaches out to those of Jewish heritage by connecting the good news of Jesus Christ with the historical scriptures of the Jewish faith. In fact, Paul doesn't even make it through his introduction before he introduces the core of his message of Jesus' lordship--and Paul's ministry--based on Christ's death and resurrection:

The gospel [God] promised beforehand through his prophets in the Holy Scriptures regarding his Son, who as to his earthly life was a descendant of David, and who through the Spirit of holiness was appointed the Son of God in power by his resurrection from the dead: Jesus Christ our Lord. Through him we received grace and apostleship to call all the Gentiles to the obedience that comes from faith for his name’s sake. And you also are among those Gentiles who are called to belong to Jesus Christ. (1:2-6)

Paul declares his goal of coming to Rome encourage and enlarge the group of believers there. He proclaims (1:17) the good news of Ezekiel (18:9) and Habakkuk (2:4) that "the righteous will live by faith." He then reminds his readers that the entire world needs this good news of salvation.

Okay, the righteous will live by faith, but what is faith? We'll explore a positive definition of faith--the one the Holy Spirit gave us--later, but for now let's examine what faith isn't. Faith is not something we do. It is not a work; it is a state of being. An active state of being. We "put our faith in Christ Jesus that we may be justified by faith in Christ and not by the works of the law, because by the works of the law no one will be justified." (Galatians 2:16) "For it is by grace you have been saved, through faith--and this is not from yourselves, it is the gift of God." (Ephesians 2:8) Jesus says, "Very truly I tell you, whoever hears my word and believes him who sent me has eternal life and will not be judged but has crossed over from death to life." (John 5:24)

Martin Luther reminds us that faith is more than believing. In fact, many moderns, both Christians and atheists, confuse believing God exists with having faith in God. While science disbelieves whatever cannot be quantified and measured, God invites us to test him. "Test me in this" (Malachi 3:10 on giving). "Taste and see that the LORD is good." (Psalm 34:8) "Whoever is kind to the poor lends to the LORD, and he will reward them for what they have done." (Proverbs 19:17) And Jesus said, "Give, and it will be given to you. A good measure, pressed down, shaken together and running over, will be poured into your lap. For with the measure you use, it will be measured to you." (Luke 6:38) He gives not as the world gives or measures, but he who approaches without faith does not approach at all. "In him and through faith in him we may approach God with freedom and confidence." (Ephesians 3:12) "Such confidence we have through Christ before God." (2 Corinthians 3:4)

Mere intellectual ascent to the validity of the Bible or even of Jesus' life and death does not save you. You are saved by your faith in Jesus. "Having been buried with him in baptism, in which you were also raised with him through your faith in the working of God, who raised him from the dead. When you were dead in your sins and in the uncircumcision of your flesh, God made you alive with Christ." (Col 2:12-13) God did the work. He did it in advance. Before you sinned; before you were even born. We don't come to God by our faith as if building some emotional muscle. No, we accept he's already done what is needed and allow him to plant the seed of faith in us. That's not the end of it; it's barely the beginning. Faith is not just believing with your mind, like setting a hat on your head; it's trusting with your life, like strapping on a parachute.

Building understanding and confidence in God’s plan, Living in the Spirit offers insights into the book of Romans and outlines the role of today’s believers.
Author Ron Andrea discusses the richness of Paul’s message to help modern Christians grasp and apply it to their lives by considering how Paul and all Christians are called to respond to and represent the good news of Jesus; showing how modern Christians feel God’s wrath like those of Paul’s day because of idolatry, hypocrisy, and pride; and outlining God’s loving provision of Jesus as the answer to sin. He also describes how God provides a righteousness to restore us to the relationship to God which Adam enjoyed before the fall and reveals why faith is basic in believing in God but also to relating to God.
Including a helpful study guide, Living in the Sprit exhorts you to explore a closer relationship with God.

“This is prime reading for those who truly want to grow spiritually and desire to get closer to Jesus. The material is succinct, straightforward, and easy to read, yet filled with insights that will help fulfill God’s calling for your life to walk with him in the spirit.”
—Gary Garner, senior pastor,
Prevailing Word Ministries

Ron Andrea majored in Bible, religion, and philosophy at Southwestern College in Kansas. He is an elder of Prevailing Word Ministries and teaches Bible studies at Glen Allen Christian Fellowship in Virginia. A veteran with thirty years of military service, Andrea and his wife, Treva, live in Elmont, Virginia.