Life as a Missionary Kid in a Family of 11 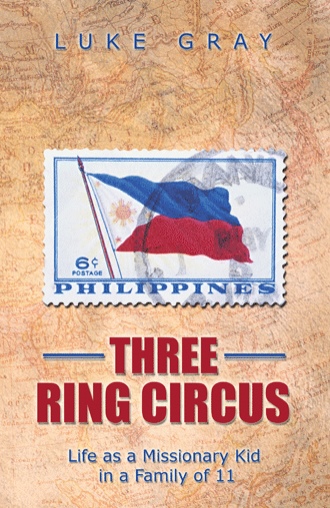 I can imagine, mostly from accounts my parents gave, what it was like when they arrived in the Philippines. After disembarking from the plane late at night, they trudged through a room that felt and smelled like a steam cave until they reached customs where they processed my father’s passport, then my mother’s, and one for each of their three children: Anna, Caleb, and Enoch. Weariness, accompanied by stiff backs and sore muscles, crept through their bodies like old age, to say nothing of sleep deprivation following twenty-six hours of travel. They wandered through the stifling terminal to the baggage claim where they saw a man holding a sign reading, “RBMU,” the initials for their mission agency. After introducing themselves, my parents gathered their luggage and headed outside. Dark-skinned figures were everywhere. Sounds flooded their eardrums: car horns, airport security, and taxi drivers shouting in a language faintly reminiscent of chicken clucks. The humidity wrapped around them, leaving them sweltering and sticky and suffocating, the air almost like water. They stared around like beady-eyed goldfish gulping for air. In the midst of the chaos, they had to wonder: what had they gotten themselves into? The man from the mission agency herded them through the cacophony and into a van. Once in the vehicle, Dad and Mom could reflect on how they ended up in such strange circumstances. Months before, my parents started investigating mission agencies, including a group called Regions Beyond Missionary Union, and RBMU offered my parents an opportunity to visit a mission site. Dad felt a particular compulsion to work with large communities of people in urban areas who had not heard about Jesus. Though he had an interest in China, the country was no longer open to missionaries. At that time, RBMU was focusing on sending missionaries to the Philippines, and the only urban place in the Philippines that they were targeting was Naga City. RBMU invited my parents to spend five and a half weeks in Naga City in order to get an impression for the environment and ministry. At the time, my parents’ church was not interested in sending them on a short mission trip; few of their staff had gone on such trips. For that matter, the church had never sent a member of their congregation to be a full-time missionary. During that time, Dad, who was the church’s evangelism and missions pastor, brought in a renowned speaker named Woody Philips, Sr. to share with the church congregation and mission board. During the question-and-answer time, my father asked Mr. Phillips for his perspective on short-term mission trips. Mr. Phillips shared how such small visits could save the church money by enabling potential missionaries to experience the foreign environment before making a career move. The standard option at the time was for a missionary to sign up for a four-year term and reevaluate afterward. Most mission agencies estimated that it took the entire first term just to learn the language, adjust to the culture, and start to develop a ministry. If a missionary did not return to the mission field after the first term, all the money that was invested—for a five-person family at that time it was roughly $150,000—would basically go to waste. After seeing the math, the church funded my parents’ trip. Those first five and a half weeks gave my parents a glimpse into missionary life in the Philippines. They were able to live in a house with a national who helped with the chores. My parents attended a local church plant and temporarily led a Bible study. They tasted the foreign cuisine, tried to understand the strange dialect, and toured the city with its congested streets and bright colors. They found it impossible to fully grasp the life they could quickly be living, but the weeks helped them process. Mom had nightmares for the first two weeks after returning stateside, likely because her subconscious was attempting to reconcile the idea of living in the two-thirds world indefinitely. Eventually, though, Dad and Mom decided to join staff with RBMU as missionaries in the Philippines. It took about a year for my parents to raise all their financial support, and selling their house in Wichita was one of the final elements of transition. Friends and family came over and helped pack my family’s belongings and paint the house. My parents decided to sell the house themselves, but it lingered on the market until a week before their departure. Without technological advances like the internet, selling a house in Kansas from the Philippines, even with the help of a realtor, would be problematic. Finally, the house sold, and my family was officially homeless. The last rope on the swinging bridge between the United States and the Philippines had been cut—the ships were burned—there was no turning back. My parents had adjusted slightly to the Philippines during their prior five-week trip, but culture shock persisted throughout their time there. Indeed, the difference in cultures was so jarring that mission agencies commonly assigned missionaries a month of vacation time every year in order to help diffuse the pressure. Even with special arrangements, many missionaries caved within their first years abroad. They developed health conditions, had mental breakdowns, or simply decided that the stress was too much. Our later returns to Naga City, via the Pili Airport, included terrifying landings. The runway was, by American standards at least, too short for comfort, with a drop-off at the end. The plane would touch down, the pilot slam on the breaks, and the aircraft shudder to a halt. As the plane turned around at the end of the runway, we could stare down the embankment as the airplane wing hung over empty space. Such a reentry always startled us back into life in the Philippines.

Three Ring Circus offers an honest and entertaining, behind-the-scenes experience of large family missionary life from the perspective of a true insider—one of the kids. Witness the most exciting aspects of eighteen years of mission work in the Philippines—a vibrant backdrop that includes natural disasters, terrorist organizations, and culture shock. Meet a growing family, learn why the parents decided to become missionaries, and discover what led them to abandon birth control.

The journey is filled with strange and amusing occurrences, like a family debacle with hepatitis spread via toothpaste, and deals with complex emotions, including personal wrestling with the church. More than anything, the story is transparent, with open dialogue about the joyous and tragic alike.

“Luke Gray’s Three Ring Circus lives up to its title. For anyone considering a move overseas, this book is hilarious, but it’s also a realistic look at the opportunities and problems faced by Americans who move offshore. Luke’s comments on a healthy marital physical relationship are alone worth the price of the book. Enjoy.” John Price, author of The End of America

“Three Ring Circus is a cross between Eight is Enough and The Inn of the Sixth Happiness, full of family fun, cross-cultural contrasts, and solid purpose.” Terese Thonus Ph.D, Director for the University of Kansas Writing Center

One of nine children, Luke Gray was born and raised in the Philippines as a missionary kid. After returning to the US at seventeen, he studied creative writing at the University of Kansas, graduating with distinction in 2011. He lives in the mountains around Asheville, North Carolina, with his wife.