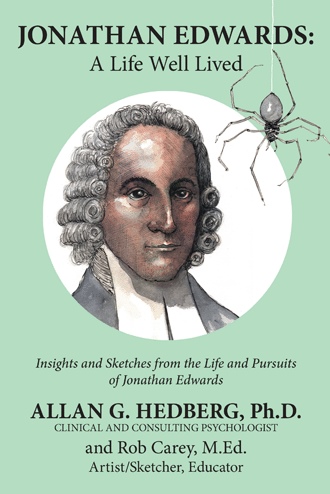 How does one highlight and remember Edwards’ life? How might one recall Edwards when looking through a rear view mirror? Edwards’ life could be summarized in nine keynote traits through which his faithfulness in ministry shines as the bright sun. Here is how his life would be captured as he faithfully lived it before his family, congregation, community, and the greater Christian community.

Keynote traits of Edwards Linguistically Talented: Edwards learned English, Greek, Latin, and Hebrew by the age of 13. These languages gave him a rich basis for the understanding of the scriptures and being able to exposit the Word of God to his congregation, including the youth and children.

Prolific Author: Edwards was prolific. He wrote nearly 100,000 pages in his lifetime, the equivalent of 70 volumes. This a monumental task to transcribe and publish, especially when reading his work is most difficult. Many of his manuscripts are considered of hallmark status. He wrote over 1200 papers and books in his tenure as a pastor, teacher, missionary, and college president. In addition, countless articles and addresses were penned from his heart and mind while sitting at the secretarial desk, a desk which he modified for his comfort and productivity. He considered his writings his second way to affect change upon a sinful world.

Devoted to Self Examination: Edwards was guided in his personal life by his personal resolutions. His 70 Resolutions were drafted over nine months based on personal reflection and self-examination while at Yale and while briefly serving as a pastor in New York. The resolutions were concluded shortly after he returned to East Windsor. He was motivated by his strong determination to rid himself of shameful behavior and thoughts. Instead, it was his intent to live a godly, inspirational, and healthy life for God’s glory. Can you imagine Jonathan and Sarah talking and struggling with the issue of how to live out his various resolutions as they walked or rode their horses? No doubt, Sarah took the role of the encourager during their spirited and lengthy talks.

Intellectually Gifted: Edwards is considered the most talented and gifted thinker in American history. His measured intelligence, had it been possible in his day, would have undoubtedly topped the IQ chart and placed him in the 98th or 99th percentile of the population. He certainly would have qualified as a member of the Mensa International Society.

Strong Communicator: He was able to arouse an audience to respond to the Gospel’s call and message. Several thousand sermons were preached and written, but none as famous as, “Sinners in the Hands of an Angry God.” In it, he declared the essence of the gospel and its message to all people. At least three original sermons per week were preached. Although he was shy and uncomfortable in small talk, he rose to the occasion and spoke to any size audience when presented with an opportunity. It was if an extra dose of adrenaline was triggered by the response of the audience that helped him overcome his social anxiety.

Fundamental in Belief: His basic personal beliefs served as the basis of his sermons and godly lifestyle. He had only one message or theme on which he spoke. It was the same for him personally, as it was for his audience at the time. He focused on the sovereignty and grace of God in all of his sermons and writings. He was grounded in reformed theology as the foundational stones of his biblical interpretations.

Godly and Healthy Living: Edwards’ purpose for living was serving God fully for God’s glory and honor. God was to be lifted up before all men through his ministry and daily lifestyle, even though his own health and wellness may have been at risk at times. However, he realized that a healthy body was essential if he was to maintain his demanding preaching, writing, and pastoral duties and schedule. Also, a healthy body and lifestyle were deemed pleasing and honoring to God. This is one area in which he struggled all his life. He committed himself to maintain a healthy body while working and serving as he did with so much intensity?

Inspirational Leadership: Edwards lived with the hope that he would be a godly example and driving force for others to follow. He was not just committed to his own church ministry, but to those attending other churches and those outside the faith as well. Since his desire was to reach all with the Gospel’s message, he lived and preached so others would follow his example and God’s design for the believer. He expected nothing more of any other person than he expected of himself.

Profound Legacies: Edwards’ influence and legacy lives on. The generational family’s footprint of influence reaches into every field of study and leadership. As of 1900, the Edwards’ family produced over 1400 men and women with strong personalities known generally for godly living, social influence, spiritual and church leadership, governmental formation and process, educational change and advancement, as well as legal expertise through the legal community. The Edwards’ family is now into its eighth generation. Another legacy was built over the years besides the family. His books, sermons, pamphlets, and other documents have been restored and passed along to Edwards” scholars, educational institutions, libraries, and individuals. They collectively contain a second legacy of significant world-wide proportion.

In summary, Edwards would be well pleased if he knew that in his life, the words of Paul in Philippians 4:8-9 have been embraced. They very well express his heart and desires. The passage reads, “All that is true, all that is noble, all that is just and pure, all that is lovable and gracious, and whatever is excellent and admirable---fill all your thoughts with these things. The lessons I taught you, the tradition I have passed on, all that you heard me say or saw me do, put into practice; and the God of peace will be with you” (TNEB). Besides this scripture passage, Edwards and Paul were very similar and had similar experiences, not the least of which were Paul’s and Edwards’ missionary detours in the efforts to expand the presence of the church in their respective days.

Dr. Lorne Sandy was known for his “sandyisms.” One of his more famous quips was, “You can either make a mark with your life, or you can make a blur.” For each of us, life is a series of options and choices. Over time, we become known for the trend of our choices. Right vs. wrong choices, helpful vs. hurtful choices, good vs. bad choices, ethical vs. unethical choices, and legal vs. illegal choices, are some possible trends. Looking back over our life, we may be pleased or regret the pattern of our life.

Most of us of live with some regret of a decision made or some behavioral action taken in years past. While we generally cannot change a choice once made, we can enter into a process of changing our future patterns of behavior. Rehabilitation may include, but not be limited to, incarceration, psychotherapy, counseling, behavior modification, assertive training, biofeedback, and education. Change can be brought about by greater self-understanding and by changing the value and strength of a particular behavior pattern. Every community has a host of services and options by which a person can confront his self-defeating life style and begin the process of making a mark with their life, as Dr. Sandy suggests. A spiritual awakening and decision to accept Christ’s offer of salvation is the way of experiencing change from inside out.

I have been wishing aloud for years that professional psychologists would take a look at Edwards, helping us think about his life—and what can be learned about it today—from a mental health perspective. Dr. Hedberg has done just that. Of course Edwards is now in heaven, so conjectures about his psyche ought to be made with great care. Still, cautious, humble hypothesis about his inner life and the lessons it affords for people seeking better health can lead to useful conversations that bring healing to the soul. Whether or not you feel like Edwards, who was an ordinary man with extraordinary gifts for sensing the work of the Spirit of God, I pray that God will use this book to make you whole.

Dr. Hedberg has shared from his passion for Jonathan Edwards some unique experiences as a psychologist, which are a delight to read.

Allan G. Hedberg, PhD, clinical psychologist, received his doctorate from Queen’s University in 1969. He has taught at several universities, including Wheaton College, Baylor University, and Trinity Western University. He has served on the Board of Governors of Trinity Western University and served as president of the California Psychological Association. He was the founding director of Avante Health. He maintains an active clinical and consulting practice and is regularly interviewed on radio and other media.

Dr. Hedberg and his wife, Bernice, reside in Fresno, California. They have a legacy of three adult children, Carrie, Darcie, and Ethan, and their spouses, who are active in their own respective professions, churches, and communities. All are active in world missions. Their legacy includes eight active grandchildren, Amanda, Micah, Linnea, Johanna, David, Birgitta, Charis, and Elias.