End time events made simple What is Heaven really like Proof that Jesus lived, died, and rose again Satan, demons and the invisible war All about angels Can you really know your going to Heaven and more……. 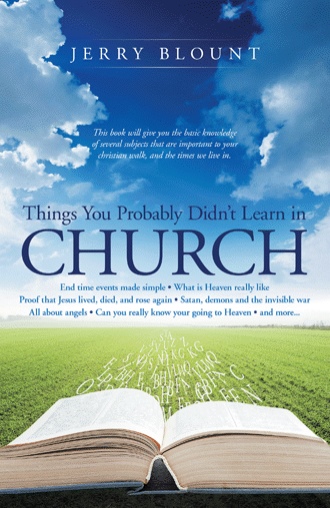 The Old Testament was written over a period of 1000 years. During that time God gave his prophets over 300 prophecies concerning the messiah’s coming. In the Old Testament there are 60 major messianic prophecies and 270 minor prophecies or conditions that was fulfilled by one person. That person was Jesus Christ.

Mathematician professor Peter Stoner and his class done the calculations in reference to eight major prophecies and found that the chance that any man might have lived to the present time and fulfilled all eight prophecies is 1 in 100,000,000,000,000,000. Or to put it in perspective, Stoner determined that would be like covering the state of Texas 2 ft. deep in quarters, mark one quarter, bury it somewhere in Texas, blindfold a person and tell him to go find it on the 1st try. They determined that the odds for someone to fulfill 48 of the prophecies was 1 in 13 trillion. Amazing isn't it that Jesus not only fulfilled those 48 prophecies but he also fulfilled all 330 prophecies. God did not intend that there be any mistake about who the Messiah was.

Lets look at some of the major prophecies that God gave us through his prophets in the Old Testament. We can track the lineage of Jesus in Genesis from Adam to his birth. Genesis and Jeremiah both specified his ancestry; he would be a descendant of Shem, Abraham, Isaac and Jacob, from the tribe of Judah, the house of David. In Isaiah 7:14, we're told that the Messiah will be born of a virgin. In Micah 5:2 we're told that he would be born in Bethlehem. Isaiah 53 pictures a messiah who would suffer and die for the sins of Israel and the World. This was 700 years before Jesus. Isaiah predicted the Jews would reject him and the Gentiles would believe in him. Psalms 22 foretold the crucifixion of Jesus 800 years before crucifixion was invented by the Romans.

Psalms tells us that the Messiah would be betrayed by a friend for 30 pieces of silver and that it would cast on the floor of the temple and used to buy a potters field, and that's exactingly what happened.

Malachi 3:1 tells us that the Messiah would come while the Temple of Jerusalem is still standing. The temple was destroyed about 37 years after Jesus Ascension and has never been rebuilt since.

Isaiah 40:3 and Malachi 3:1 states that there will be a forerunner for the Messiah, a voice in the wilderness, one preparing the way before the Lord, John the Baptist fulfilled that prediction.

God thru the Old Testament predicted the precise lineage of Jesus, the time of his coming, the details of his birth, the place of his birth, his betrayal by a friend, (Judas), and the betrayal price. The manner of his death, the people’s reaction, the casting of dice for his clothes, the non-tearing of his garments, his resurrection and hundreds of other prophecies and details.

Actually there are two parts to the second coming. The first part is the rapture, when all true believers will meet Jesus in the sky and be transported back to Heaven with Him. This is a event only for the believers. The unbeliever will not see it happen. They will suddenly realize that people are missing, maybe right before their eyes.

In the New Testament book of Revelation, and the Old Testament book of Daniel we can follow the events of the Tribulation. There will be those that turn to God during this time, however as the Tribulation continues the devil and his demons will be more and more in control until at last it ends at Armageddon. At this time the great Lord Jesus, the King of kings and Lord of lords will descend with the armies of Heaven and put an end once and for all to the evils of the devil and Antichrist.

Ezekiel's prophecy 2600 years ago of the alignment of nations for and against Israel squares very closely with what is happening in the world right now. Ezekiel foretold a time when Russia would attack Israel along with Iran, Ethiopia, Libya, and others. Never once in history has Russia formed a military connection with Iran, (formerly Persia–name changed in 1935), until now. This is an end time alliance that was prophesied 2600 years ago. The new European power structure will fulfill the prophetic predictions which tell us that a one world system will be implemented. When established it will fall into the hands of the Antichrist.

The events are now shaping up for the start of the tribulation that will lead to Armageddon. The only event that needs to happen first is the disappearance of the true believers, known as the rapture. There is nothing else that is predicted that needs to happen before Christ returns to take the believers home. All the Biblical predictions that are yet unfulfilled take place after the rapture. We can see the world shaping up now, leading to the fulfillment of those prophecies. The antichrist will appear after the rapture. Everything is in place. Christ is surely returning soon.

Prelude To The Antichrist

The Bible tells that most of the end time events will be centered around Israel and the middle east and because of oil, the world’s attention is already focused on that area.

Twenty-six hundred years God gave king Nebuchadnezzar a vision in a dream. In this dream, which the prophet Daniel interpreted:

“ there is a God in heaven who reveals mysteries. He has shown King Nebuchadnezzar what will happen in the days to come.” (Daniel 2:28) God said that from then until the end, there would be four Gentile kingdoms that would rule over Israel. Later God gave Daniel much more detailed visions of what would occur before the end would take place. God was very specific about the kingdoms that would rule over Israel.

God said that out of the fourth kingdom, ten kings would rise up. We know that this is still in the future, as never in the history of Rome has there been ten different kingdoms or even ten different leaders. God also said that the fourth kingdom would be in place at the end and would be suddenly destroyed. This too will be in the future since history tells us the the Roman empire slowly declined over many centuries on its own.

Out of the European Union we can expect ten nations to rise to prominence. From one of these Gentile nations the antichrist will emerge.

As a Bible researcher and teacher of over forty years, I have noticed that there are certain topics in the Bible that most Christians know little, if anything, about. For instance, do you think heaven will be a boring place? Many Christians do, so why would they be looking forward to going there? Learn the real facts. Do you know the next prophecy to be fulfilled will be the Rapture, when Christ will return to take the believers home to heaven. Many Biblical scholars believe this will happen soon. You need to be ready. Are you aware that there is an unbelievable amount of evidence that proves that Jesus lived, was crucified, and rose again. The Bible contains information that could not have been written without divine inspiration, including advanced knowledge about nature, prophecy, medicine, sanitation and science; knowledge that was thousands of years ahead of its time. Fulfilled prophecy and archaeology discoveries are proving the scriptures to be true. The effects of Satan and his demons are all around us––broken marriages, depression, private doubts about God, divided churches. You need to be aware of his tactics. Are angels involved in our everyday lives? Do you have your own guardian angel? These questions and many, many more are answered in this book. Many years ago I asked God to give me a hunger for His word. He honored that request far more than I anticipated. I truly enjoy studying, researching, and sharing the scriptures. God has blessed my wife and myself in so many ways. We live in a beautiful part of the country, Michigan’s Upper Peninsula. God has also blessed us with a great son and daughter, their spouses and the four greatest granddaughters ever. I am a blessed man!

Many years ago I asked God to give me a hunger for His word. He honored that request far more than I anticipated. I truly enjoy studying, researching, and sharing the scriptures. God has blessed my wife and myself in so many ways. We live in a beautiful part of the country, Michigan’s Upper Peninsula. God has also blessed us with a great son and daughter, their spouses and the four greatest granddaughters ever. I am a blessed man!