The Commandments In The New Testament Gospels

WWJ–TUT–D? WHAT WOULD JESUS TELL US TO DO? 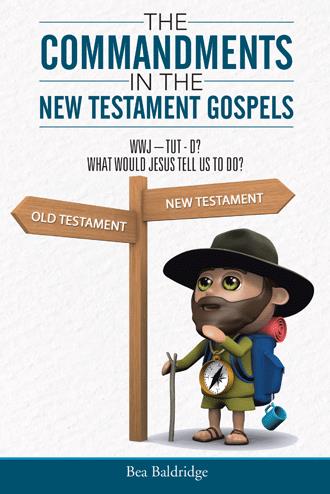 The Commandments in the Book of Matthew:

Commandment #17. Matthew 5:31-32: NKJV: Furthermore it has been said, 'Whoever divorces his wife, let him give her a certificate of divorce.' 32. But I say to you that whoever divorces his wife for any reason except sexual immorality causes her to commit adultery; and whoever marries a woman who is divorced commits adultery.

This is a very controversial and hard subject. We have hundreds and hundreds of divorced and remarried people in the churches and in ministry in the churches. Every denomination has their own policies about this subject.

My friend, Samuel Peak of Biblical Faith Ministries explains it this way:

The first part of this verse (a) translates back into the Hebrew perfectly. The second part (b) does not. He explains that in part A, there is a "vav of purpose." Vav is the sixth letter of the Hebrew aleph-bet. It can stand for and, but, or, so, then, because, therefore, namely, since, while, on the contrary, etc. This vav tells us the purpose of what is going on. The vav used in this verse means "in order to" marry another. Whoever divorces his wife "in order to marry another" commits adultery. He explains that this could also mean "Whoever divorces her husband." In the Jewish law, a man can divorce his wife over any petty thing, like burning the toast. Here in our example, a wife could deliberately burn the toast, etc., "in order to marry another."

Part B of our verse, Luke 16:18b: If the husband has set her up, she is free from this obligation not to marry and may marry. This is committing fraud. In Mark 10:1-12 (NKJV) we see this same question from one of the pharisees, "Is a man able to send away his wife?" Yeshua tells them, (verse 6): "Because of the hardness of your heart, he wrote this commandment for you (Moses). But from the beginning of creation, God created them male and female. Therefore, a man shall leave his father and mother and cling to his wife, and the two will become one flesh. If so, they are not two any longer, but one flesh. Thus, what God has joined, a person shall not divide."

If you are a believer and have divorced your spouse and have remarried, don't let satan condemn you. That's his job. Just ask the Lord to forgive you, repent of any sin you may have committed causing this divorce, then go on with your life. No one among us can cast the first stone, I guarantee it! If you haven't remarried and your ex-spouse hasn't remarried, don't even think of remarrying him/her. Malachi 2:14: NKJV: Yet you say, "For what reason?" Because the LORD has been witness between you and the wife of your youth, with whom you have dealt treacherously; yet she is your companion and your wife by covenant. If you are married, you are bound before God in that relationship. If you are being abused, your spouse has broken your covenant. You are not expected to stay in that marriage. If he/she is committing adultery, you have a legal right to divorce. The discussion continues in the next two verses: Malachi 2:15-16: NKJV: But did He not make them one, having a remnant of the Spirit? And why one? He seeks godly offspring. Therefore take heed to your spirit, And let none deal treacherously with the wife of his youth. 16. For the LORD God of Israel says that He hates divorce, for it covers one's garment with violence," says the LORD of hosts. "Therefore take heed to your spirit, that you do not deal treacherously."

Treacherously: Used twice here means to act covertly, fraudulently, perfidiously. Hiding is often applied to covertly and perfidious – treacherous. To sum up, there are only three things that biblically release a marriage partner from a marriage: (1) the death of one marriage partner; (2) breaking the covenant through sexual unfaithfulness or acts that would void the contract, such as abuse; and (3) the desertion and divorce by an unbelieving marriage partner as told in the Christian Torah. That is the plain teaching of Scripture.

Deuteronomy 24:4: NKJV: Then her former husband who divorced her must not take her back to be his wife after she has been defiled; for that is an abomination before the LORD, and you shall not bring sin on the land which the Lord your God is giving you as an inheritance.

Here we have what the Torah says about remarrying an ex-spouse. Although this is in the Sinaitic Covenant, the principle seems to me to be also pertaining to us as believers. It says if you're married and divorce your wife, don't take her back if she has been with another man. I'd say vice versa. That is considered "defiled." If we don't take this principle as pertaining to us, it opens the door for a lot of defilement in the church. It defiles the home, the children, our families. God looks at the union of a husband and wife as sacred, a gift given to them. If we neglect that gift and take it as just a suggestion, it opens up a lot of excuses for sin in our lives. The bottom line is, how much do we want to live for the Lord? How much of our lives do we give to Him? All, half, two-thirds? If we truly are born again, spirit filled, we need to give him ALL our lives and give up any wants in our life that aren't pleasing to Him. You have to work out your own salvation in this one. Many people are married to someone they thought they loved and after a while realize they don't and want out. I'm the merciful person. I would tell you "leave him." But I'm sure not God. Pray a lot, talk to your pastor or a counselor, and then you decide which road to take.

To you who are not married, heed this. Make sure you love that person and are compatible and want to spend the rest of your life with them. Don't rush into it. Spend a couple years getting to know them, then weigh the pros and cons and see what you believe you can live with and what you can't. If you know there's one thing that's going to drive you crazy for the next 50-70 years of marriage, don't marry him. Both of you go to a believing marriage counselor before you marry. Many churches require it now and have some excellent counselors. If you don't click with that one, ask for another one. But be sure you are going into this marriage with eyes way wide open.

If a little voice whispers in the back of your mind in a flash, heed it. Don't marry him/her if there are any doubts at all. Write these doubts down. Write the pros down. Compare them. Make yourself look at the reality of it all. Don't lie to yourself and think you can change him/her or that you can live with this one thing. Get it out in the open. Pray a lot.

The Commandments in the New Testament Gospels is about how Christians are supposed to live under Jesus’ commandments.

For many years I have noticed many people who are confused about how Christians are supposed to live. But are the Ten Commandments in the New Testament? And should we follow them?

We need to question which parts of the Bible are written to us, which parts are written for us, and which parts are for our moral guidance. Most of all, we need to go back to the first century and see how the followers of Jesus lived. We need to learn the customs at that time, the idioms of their speech. We need to be aware of what the first-century political climate was like in order to understand the New Testament.

The Book of Hebrews talks a lot about the Order of Melchizedek. What is that order? This book will explore this, along with one core question: What is the secret that believers have been missing all these years about what God expects from us? Go with me on an exciting journey through the Gospels as we discover who we are in the Messiah and what our Commandments are.

I grew up attending a little Baptist Church. I was saved at age eight and learned to study the Bible at that early age. My life has been spent teaching Sunday school, serving in churches, and now teaching Hebrew and Bible studies. I enjoy spending my time studying God’s Word.