Killed by the Church, Resurrected by Christ 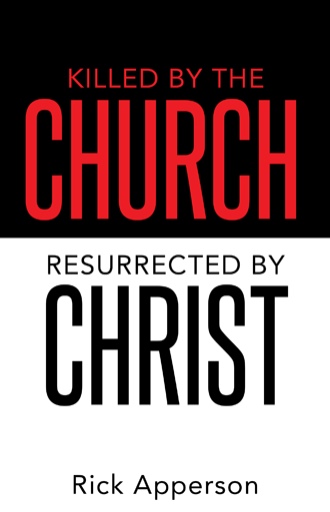 My earliest memory of church is that of being baptized as a young child in the Catholic Church. I don’t remember much, except that we had to dress up and everyone seemed really happy—well, that and some guy sprinkled water on our heads and we didn’t have to use a bar of soap! For a child, that was a big deal.

My mom enrolled me into a Catholic kindergarten class and I really loved the experience. I enjoyed the teacher and had lots of friends, but I could have gone without the frequent application of ruler to knuckles that seemed to be the discipline of choice. Around this time, I remember going to one Catholic Church service and falling asleep, thus ending my first foray into this thing called “church.”

I don’t know what language was spoken in that service—remember I was five—but as a friend wrote to me recently, one problem he had with the Catholic Church was the fact that it used Latin while everyone else spoke a different language.

The Catholic Church was interesting. The priest would speak in Latin and sing all by himself in Latin. The funny thing was that the majority of the Catholic congregation was Danish.

My mom has often shared the story about how, when she was pregnant with me, she felt me move for the first time. She said that my grandmother had come over for a visit and sang the hymn “Amazing Grace.” My mom tells me that when she heard that song, I began moving in her belly. I shared that story at a church service in our local nursing home where one resident corrected me and said it was not a belly, it was a womb!

That song is my all-time favorite hymn to this day. I like to think that something inside me was already responding to God. God said to Jeremiah the prophet, “Before I formed you in the womb I knew you, and before you were born I consecrated you; I appointed you a prophet to the nations” (Jeremiah 1:5). Now, I don’t think God is calling us all to be prophets, but I do believe He knew us even before we were formed in the womb. I take comfort in that fact. He is God!

I don’t want to get sidetracked from the theme of this book, but Ephesians 1:4–5 goes along with this for me. It says,

Even as he chose us in him before the foundation of the world, that we should be holy and blameless before him. In love he predestined us for adoption as sons through Jesus Christ, according to the purpose of his will.

For me, these verses take on more relevance because I see in my own life how God really wooed me throughout my childhood. I believe God is wooing all of us, but not all of us respond to that love.

We weren’t a church-going family, though we were raised to believe in God and that He had a son named Jesus. Though we weren’t born-again Christians, being nominally Catholic, we still had a strong belief in God the Father, His Son Jesus Christ, and the Holy Spirit. I just didn’t know what it all meant. I had a little red Gideon’s Bible I’d gotten in the fourth grade and would occasionally read it, but the words didn’t make sense to me. I still cherished that Bible and knew it was important; however, without proper discipleship, nothing took root in my heart.

I remember a parade in Gettysburg, Pennsylvania, where I was living at the time, when I was nine. As one of the floats passed, its occupants tossed out little red Scripture booklets. In the back was a “sinner’s prayer.” I must have read that booklet hundreds of times and said that prayer again and again. I had no one to explain it to me, and after a while, this prayer was added in with my “Hail Marys” and “Our Fathers.”

A sower went out to sow his seed. And as he sowed, some fell along the path and was trampled underfoot, and the birds of the air devoured it.

The ones along the path are those who have heard; then the devil comes and takes away the word from their hearts, so that they may not believe and be saved.

These two verses describe where I was. I read the words in these booklets, but as I said before, nothing took root. Without someone to come along beside me and explain what I was reading, it didn’t make sense. I really could have used a Phillip (Acts 8:26–40)!

As I entered adolescence, I began to look into other areas of spirituality. I had a friend in school who introduced me to palmistry (palm reading). I began to study lifelines and tried to figure out what all those squiggles on our hands meant. I moved on to childish attempts at ESP, which included trying to predict which playing card (out of a deck of fifty-two) would be flipped over next.

My main hobby though was devouring my daily horoscope. I read it faithfully in the newspaper every day. I was so caught up in the meaning of all these things. Coupled with my unnatural fear of death, it’s a good thing no one had heard of Prozac back then, because I would have been a prime candidate! Around 1983, there was a story I read somewhere that, due to a planetary alignment, the world could possibly spin off its axis! I vividly recall freaking out about that one! I was twelve years old and was convinced the world was coming to an end.

Oh, the joys of childhood!

It seems today that people no longer want to actively participate in church. Ask most of those who have abandoned the church and you will hear stories of hypocrisy and church abuse. Long-time believers are ready to walk away out of boredom and frustration. Killed by the Church, Resurrected by Christ seeks to equip people with the principles they need in order to fall in love with the church again in a much healthier way.

In this book, you will find stories from around the world and right next door. Stories of all the good the church has to offer and sadly, some of the worst as well. You will discover Biblical principles that relate not only to church, but to our relationship with the body of Christ at large. You will hopefully develop a deeper understanding of your identity in Christ.

You will also read of the author’s recovery from “death by church” and his own resurrection by Christ.

“Rick takes the reader through a valley of the shadow of death––only, sadly, this valley’s shadow is cast by a series of disastrous church experiences. But through it, he freshly encounters Christ, and learns that surely goodness and mercy follow him all the days of his life, and he will dwell in the house of the Lord forever. This is a book for all those who love the church enough to want the best for it.”

From Tennessee to Russia, Croatia to Canada, Rick Apperson has traveled the world. He loves baseball and collects baseball cards. He is a pastor and blogger and loves his job with the Salvation Army. He considers his role as husband and father to be his two greatest achievements.