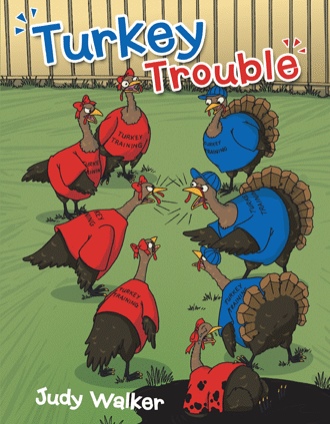 A round golden sun rose in the sky over Yummy Yummy Land on this very special day. Today was the day the King would inspect the turkeys at his Royal Turkey Ranch. The King’s vision of the fat, juicy birds with rainbow-colored feathers made his mouth water and his eyes glisten with delight as he dressed in his royal robes and got ready to depart for the ranch. “Bring my royal carriage to the front of the palace, Coachman!” the King ordered excitedly. As he climbed into the carriage, Wise Sir Who perched on his shoulder and they made their short journey to the ranch. When they arrived, the King commanded, “Line up, my turkeys, and march past me, two by two. I want to see you in all your beauty and splendor!” What a procession it was! Turkeys were here and there and everywhere…everywhere but in a line two by two. The King could not believe his eyes. Never had he seen or heard such ornery, ill-mannered turkeys. “This will never do!” cried the King. He shook his head in despair. These birds are a disgrace to Yummy-Yummy Land! These turkeys are tough.” It was a very discouraged King who returned to the palace that night. “Whatever shall we do? Tough turkeys are terrible!” These words echoed through the royal bedroom all night long.

There is trouble in Yummy-Yummy Land! The turkeys of the Royal Turkey Ranch are tough and terrible—they’re unfit for the King’s Royal Feast. How on earth can these scraggly creatures become tender? The answer is found in Pokey, Tillie, and the Turkey Trainers who transform the turkeys using this recipe: love makes turkeys tender, and tender turkeys are best.

Through twists and turns in this whimsical story, children learn valuable lessons about life and friendship. The surprise ending proves that being kind and loving brings unexpected rewards.

Judy Walker is a retired teacher and grandmother of four beautiful grandchildren. With a passion for writing and a desire for children to grow up with values of love and respect for others, she wrote this story to inspire them to become the best they can be.