A Young Boy’s Triumph over Adversity 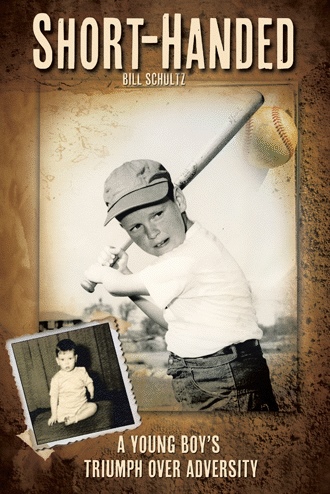 The year I was born, 1945, was an eventful year for the U.S. World War II was coming to a successful end—with Germany surrendering in July, shortly after Hitler committed suicide, and Japan surrendering in September. President Franklin Roosevelt died in office that year, and Vice President Harry Truman became president. The U.S. dropped atomic bombs on Hiroshima and Nagasaki.

At home, the popular toys were erector sets, electric trains, Silly Putty, and the Slinky. Popular radio shows included “The Lone Ranger,” “The Jimmy Durante Show,” and “The Shadow.” New housing developments began to spring up in the suburbs.

On July 23rd of that year, in upstate New York, Millicent Schultz was in the ninth month of her pregnancy, anxiously awaiting the birth of her second child. Her first child, Dick, a few months shy of 13 years old, was off playing with his school buddies. Her husband, Addison, was at work at the New York Telephone Company, but stayed close to his phone anticipating a call from her at any moment. It was a typical warm summer day, and she felt healthy and very excited about her new baby.

That morning, her water broke, and her husband and sister accompanied her to the hospital. The nurses and doctors moved her into a delivery room. A few hours later, her contractions came sooner and harder and her new baby boy, later named Billy, was born. Like any post-delivery, the baby was wheeled away, placed in a warmer, and examined by the doctors.

In the 1940s, laboring women were routinely sedated shortly before delivery, and babies commonly were delivered from their unconscious mothers with forceps. The sedation had its effect for a short time after the birth. As Mom’s sedative began to wear off, she sensed that something was wrong. She noticed the hospital attendants’ and nurses’ attitudes toward her were strange. She kept asking them to “bring me my baby.” No one would say anything to her, and they kept her waiting. Finally, in the afternoon, after she had kept after them all day, the doctor, her husband, and her sister told her the reason: Billy was deformed.

The doctors discovered I had multiple congenital deformities. The biggest abnormality was the incomplete formation of my right femur—the bone from the hip to the knee, or the thigh bone. As a result, my right leg was significantly shorter than my left. In addition, the toes of my left foot were fused together.

The other major deformity involved my left arm and hand. In layman’s terms, my left forearm—between the elbow and the wrist—was incomplete, smaller, and shorter, and my left hand was incomplete, considerably smaller, and shorter than normal, with only a small thumb and two tiny fingers attached. My left arm was about half the length of my right arm.

When the time came for Mom to put her eyes on her new son, a nurse unwrapped her baby from the blanket. When Mom saw me for first time, she looked past the physical deformities and focused on her little baby’s eyes. When she caught sight of that ‘darling little face,’ she knew she could accept the rest. As the days went by and Mom had time to collect her thoughts, she quickly became determined that Billy Schultz would be raised as a normal child and accepted as such.

That was the positive attitude my mom had from the very beginning—an attitude mirrored and reinforced by my dad, her sister (Aunt Mickey), her mother (Granny), and her close friends. From the beginning, Aunt Mickey was her constant companion and helper.

We’ve never found a definitive explanation for the cause of the deformities. A bilateral (affecting both an arm and a leg) deformity is rare. My mom did contract German measles very early in the pregnancy, and that might have been the cause. But the doctors weren’t sure. Mom did not take any drugs during the pregnancy, not even for pain relief.

But the cause didn’t matter to mom. She didn’t dwell on the why or the wherefore. She was determined to make me feel loved and accepted.

Right from the start, I was surrounded by people—starting with Mom and Dad—who encouraged me and helped me tackle and overcome many obstacles. As they took me home from the hospital, my parents faced unique challenges, obstacles, and decisions. Many of my needs were quite apparent and required immediate attention. Mom and Dad were in “uncharted waters.”

Bill Schultz considers himself blessed. Early in life, he was a great athlete and a student leader. As an adult, he excelled in the corporate world and as a business owner. He’s a loving husband, father, grandfather, and leader in his church and community.

But what makes Bill’s life story truly extraordinary is how it all began.

Bill was born with severe congenital deformities of his left arm and hand and his right leg, which was amputated shortly after his birth. He overcame these unbelievable obstacles through the acceptance and encouragement of many people in his life.

From the moment he was born, Bill was accepted and loved by his parents and extended family. Throughout his life, schoolmates, co-workers, friends, his wife, and his children continued that same level of love and encouragement. With this unending support, and God’s grace, Bill overcame many physical and emotional obstacles, and achieved both personal and career happiness and success.

Bill’s life journey is a powerful message of faith, grace, and hope!

“I can’t really say that I ever considered you handicapped. Sure, I recognized you were different. But … to me, you were just a great guy. I’m not sure where you got this inner strength and courage. I’m sure some was from your folks and your older brother. But I know for sure a lot came from Bill Schultz himself.”

“I was always impressed with your determination and infectious enthusiasm. It was not a hard decision selecting you as my varsity football manager … You became an integral part of the team. You had the charisma and leadership ability to overcome that barrier. You were always inspirational and we were much better because of that.”

Bill Schultz has owned and managed an executive search firm in Madison, Wisconsin, for more than twenty-five years.

Bill has long been active in his community as a Little League coach and ministry leader in his church. He’s a motivational and inspirational speaker on the topics of encouragement and overcoming life obstacles. He feels called to speak on this topic to audiences of parents of children with special needs and to school-age children of all abilities.

He lives in Madison with his wife, Kathy. They have two grown children—Brian and Bethany—and two granddaughters.