Alzheimer's, Archaeology, and the Armed Forces

The Story of a Family 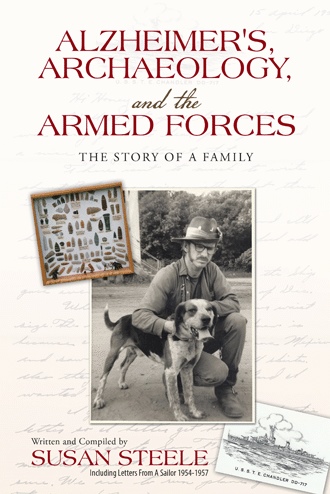 Initially, I was only going to write about Alzheimer’s and how it affected our family. However, as I delved into researching the lives of my parents, my focus shifted, and the story evolved—it became deeper and broader in scope. Yes, I have written about Alzheimer’s as it affected Dad, and by extension our family, but in putting this book together, I have chosen not to describe what Alzheimer’s is, how it was discovered, or how to be a caregiver—all of that information can be found in other sources. While the book still retains many of my original ideas, it has become richer because of what I have learned along the way.

In researching my father’s life, one of the first things that caught my attention was how vast the role of archaeology was in the lives of my parents. I was fascinated to find information on the internet that connected Dad and his collection of Indian artifacts to a number of publications; Mom was also written up in a couple of MVAC’s newsletters. Maybe it is the kid in me, but do children ever understand the significance of what their parents do? Having grown up with Dad’s stones in the house and visits by the archaeologists, I did not understand the importance of Dad’s “hobby” until I started studying his life. For this reason, I have included author notes in the story documenting his avocation as well as creating and compiling a myriad of footnotes to explain the significance of those archaeological happenings that are “merely mentioned” in the body of the book.

The second thing that created a shift in my thinking was when I started reading the letters Dad wrote to Mom while he was in the Navy (1954-57). At first, I was going to “create” a letter from Dad to Mom using excerpts from a couple of Dad’s letters for the book. However, after I started reading them, I realized that for me to pick and choose, well, that was going to be an impossible task. I had no idea just how charming Dad’s letters were; therefore, I decided to include the whole collection—I transcribed Dad’s letters and put them in the fifth chapter titled “Letters from a Sailor.”

The third aspect that affected the content of this book is the personal communication I have had with Mom. It has been a privilege to talk with her on an almost daily basis about the life she shared with Dad. Mom has filled in the gaps and made the story whole. While there are a few memories that shall remain forever tucked away in her heart—I can respect that—many of the verbal stories Mom shared with me have found their way onto these pages. Honestly, this project would not have seen its way to completion had she not been so involved.

So, this is a true story of a man who just happened to have Alzheimer’s and the family who traveled through it with him. It is a story filled with life! Fortunately, as the oldest child in the family, my memories go deep, and I can draw forth images from a previous season. I can recall a time when my father was well. So, in celebration of Dad’s life, I would like to introduce him to you, beginning with my memories. And at the risk of being redundant, I will repeat myself: He was a remarkable man. In fact, both of my parents were and are remarkable people.

The Steele’s are noted for their blue eyes and Dad’s “Steele” blue eyes were what you noticed first. They were surrounded by laugh lines and framed with black-rimmed glasses; intelligent eyes that twinkled when he was in the midst of telling a tale. He was a little man in stature; only five-foot-nine, with a wiry build. His black hair, gone gray, was combed back from his forehead, and he kept his mustache and short, gray beard neatly trimmed—sometimes he cultivated a handle-bar mustache. His face, arms, and hands were brown, weathered by the summer’s sun and outdoor elements. There was nothing remarkable about what he wore, other than the fact that most days no matter what he was doing, you would find him in blue jeans, wearing a white tee with a flannel shirt over that, and pull-on boots. He was not afraid to work hard. Dad was a simple man; he believed in a God who was good and that small things were what made life worthwhile.

From tales of buried treasure to hunting, he was an excellent story-teller. I especially enjoyed Dad’s stories about family. His grandmother taught him how to dance—right there in her little kitchen—and his grandpa took him to the woods and showed him where to look for ginseng. As he grew up with an older generation, Dad had this “old world” way about him. He was very respectful of his elders, and to his way of thinking, men and women had specific roles—there was nothing “politically correct” about that thought process! For example, when I was about to graduate from High School, I told Dad I was thinking about going into the Service. I thought he might like that because he seemed to have enjoyed his time in the Navy, but he just said, “Girls don’t do that.” There was nothing mean about the way he said it; it was just spoken matter-of-factly, so I came up with a different plan!

Whisker rubs and kisses were the greetings he bestowed upon the little ones when we went visiting. Dad was a hugger. He loved to hug us, and he loved to hug his nieces and nephews. Along with a hug, he would often give a little whisker rub, sending his small captive into peals of laughter! Many times a child, be it boy or girl, was asked if his or her name was ‘George’ or ‘Aloysius.’ For the older kids, they were often asked: “Did you know you have wavy hair? Yep, one strand stands up and waves to another.” Or this one: “Did you know you have ought-a-been hair? Yep, ought-a-been on a Billy goat!” Then he would sort of chuckle; every time was like the first time he ever told that joke.

Dad came from a very musical family. His grandparents, his father, and many of his aunts and uncles played instruments, from pianos to saxophones to violins. Some of them formed their own groups, performing in local places, such as the Circle D Ballroom mentioned in the second chapter. In fact, the day Dad married Mom, he took her to listen to the Fuzzy Mason Band: Forrest (Fuzzy) Mason, Les Halverson, Rusty Gates, Bill Hubert, and Roy Steele—Dad’s dad, who was playing the saxophone! When I was a kid, the Steele family gatherings were musical events; I can still remember my dad’s uncles sitting in a circle at outdoor picnics playing their fiddles. As far as I know, Dad never played a musical instrument, but he did have a lovely tenor voice; he particularly enjoyed singing Irish songs and jigs.

For Dad, there was nothing better than sitting in the woods on a crisp, fall day early in the morning during deer season, or throwing a line in, to catch a mess of fish. Hunting and fishing were not just hobbies and a way to make a living, they were the means by which Dad fed our family. Recognizing that animals were God’s creation and His gift to us, Dad had definite views on how we were to respect that gift. He never wanted an animal to suffer—shots had to be clean—and we were only to take what was needed. Once, he “skinned out a deer” with a stone knife and it “worked very well.”1 Dad also enjoyed gun collecting and shooting muzzleloaders.

A tale of love.

Letters. Fragile pieces of history found in a drawer, tucked away in the corners of a desk, or tied with a red ribbon. Words on paper, folded, placed into an envelope, stamped, and mailed to points around the country, even around the world. Tangible reminders that tell the story of a family.

From the Armed Forces …

He was a Sailor, traveling to the Far East on a Navy destroyer, crossing the equator to become a Shellback, longing to be reunited with the “purty miss” he left behind.

He was an avocational archaeologist, walking the plowed fields of Wisconsin, looking for ancient artifacts, working alongside the PhDs at MVAC preserving prehistory.

He was a family man, sinking into the morass of an insidious disease from which there was no escape, slowly but surely losing himself until he went home to glory.

We read what is written; can we decipher what is unwritten? There are lessons to be learned from the lives of those who have left behind the legacy of the written word. May the story of my family, as told through the nearly lost art of letter writing, capture your heart and imagination.

Susan Steele is a resident of Wisconsin and enjoys reading, writing, photography, family tree research, and traveling. She is a 2012 graduate of the University of Wisconsin—Eau Claire (UWEC), earning two degrees: Religious Studies and Social Work. Susan is involved in ministry as a teacher of the truths found in the Bible and the creator of I See You… Ministry. She is the author of two other books, Rainy Day Haikus with a Sprinkling of Scripture, and King Ahasuerus: A Shadow or Type of the Lord Jesus Christ. This is Susan’s first biographical work.