No Time to Quit

Life in a Broken Package 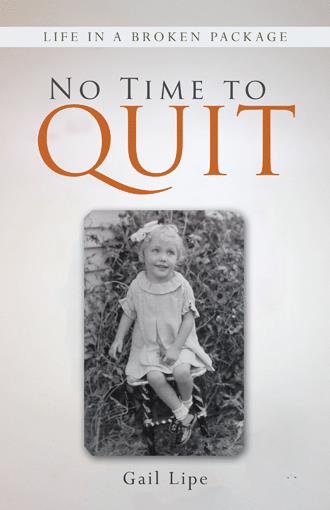 Imagine beginning your life no longer than a table knife in a hospital that lacks even an incubator. Your premature body decides it has had enough, and your heart stops beating. Then a nurse breaths life back into you. Through the birthing process, a brain injury causes cerebral palsy, and normal body movements do not develop. Life is hard, and help is difficult to find. That is how Gail Johnson’s life began in 1932. Her life is littered with miracles that came from decisions made by strong, passionate people. Through a combination of those decisions, surgeries, training, and perseverance, Gail has lived a full life. No Time to Quit takes you on a journey through many of the major challenges and events of her life. It shows that there truly is no time to quit.

Gail Lipe's lifelong passion for words has led her through years of stringing them together for newspaper articles, columns, short stories, and journal writing. An award-winning journalist, she has received recognition for both her writing and photography. This book is a gift of love: love of family, love of life, and appreciation for those who have loved and helped her mother be the best she could be. Gail is the mother of four grown children, has ten grandchildren, and lives in Chaska, Minnesota, with her husband.