Living in the Supernatural Dimension 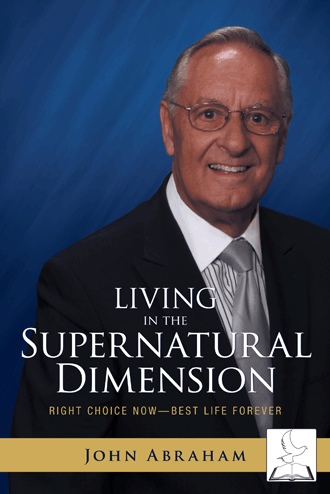 As we were returning to Canada from overseas ministry, our itinerary scheduled us through Amsterdam with a one-night layover and early-morning departure. After the hotel checkout,we awaited the airport bus, for which we were twenty minutes early. Suddenly a driver approached me, asking if I was going to the airport, to which I nodded in the affirmative. He asked us to hurry with our bags because he was late, and I wondered what was wrong with my thinking. He then said that his was not the bus we were waiting for and to come on his earlier bus.

Our cases were quickly stored in the luggage compartment of the bus, and we carried the normal briefcase and purse, plus an extra package that Shirley had been given, unto an overcrowded bus. Every seat was filled, and bodies were suspended from the handrail, hanging like sides of beef in a traditional butcher shop. I joined the suspended passengers while Shirley perched precariously on a ledge by the front door steps. When we arrived at the airport parking forecourt, the usual push to disembark quickly was in speedy progress. Shirley was in the doorway, so she grabbed her hand baggage and was first to get off the vehicle.

The bus emptied unto the large, already-crowded forecourt. Being on the earlier bus gave us leisurely time to stroll to the check-in and departure gate. Amsterdam’s airport is a sprawling terminal requiring long walks between each departure process. About fifteen minutes into the airport, Shirley asked if I had her handbag. In the crowded rush off the bus, she had picked up two bags, one being the extra package, but not the third, which was her handbag.

Shirley waited while I began the five-minute sprint back to the bus. I stepped through the doors onto the massive forecourt, which a half hour before was crowded like matches in a box. It now had a clearing perhaps forty feet wide and seventy feet long (or twelve by twenty-one metres). This clearing gave me a direct line of sight to where we had disembarked, but there was no bus to be seen. The hard-drive of my mind seemed momentarily to crash as the impact of the lost handbag downloaded. Before leaving the hotel after checkout, I had given Shirley my large travel wallet to keep in her handbag for convenience when we checked in at the airport. It contained everything that allowed the ministry on the mission fields to function smoothly. All national pastor contacts, Passports, travel documents, and airline tickets, plus cash and travelers’ checks, were gone.

While I was trying to recalibrate the consequence of this development, I realized it meant that we would not be flying anywhere. Now we had to try and secure new passports and tickets, to say nothing of all credit cards, identification, and Shirley’s other personal and important items, right on the verge of Christmas. What an assignment and challenging predicament! Before returning to Shirley with this bombshell, I took one more longing look at where the bus, long gone, now containing the lost handbag, had parked. My clear line of vision still allowed me to see that spot. At the exact place we had exited the bus stood two well-dressed bouncer-size men about five feet (or one and a half metres) apart. They were facing the airport doors and me. Looking at them in disbelief, I saw between them on the ground was Shirley’s handbag. Because of heightened airport security, I reasoned that the driver may have feared an explosive device in the bag and left it on the forecourt. As I was deciding on how to approach them, I began walking in their direction.

Shall I ask them for permission to take the bag? I thought to myself. Will they require identification, which I no longer possess? Why are they standing beside the bag without examining it or taking it to their security office? All these questions raced through my mind. Within a few feet of them, I decided that, since it was our bag, I would just pick it up and return to the airport. They could not have known that we owned the bag and might object to my actions. There was a man on either side of me, and before I had time to say, “Thank you!” and as quickly as I reached to grab the bag, both men vanished from an empty forecourt. I returned the handbag to Shirley, and she confirmed that every single item was there. After completing airport security, we had a comfortable flight and an enjoyable Christmas.

The ministry of angels needs no defence. These and many similar disasters were averted by the intervention of angels. The following Scripture is one of many that assure the receptive believer of God’s protection and guidance by His angelic agents. Could these be angels, ministering spirits, to which the writer of the Hebrews refers by asking, “But to which of the angels . . . Are they not all ministering spirits sent forth to minister for those who will inherit salvation?” ( Heb. 1:13-14 NKJV).

Living in THE SUPERNATURAL DIMENSION

A captivating and mind-stretching journey!

Living in the Supernatural Dimension takes you on a journey with God. You will learn about his voice alerts, His “Global Positioning System,” and His forks in the road. He will take the willing traveler to His highest and richest plateau.

Follow the child preacher, now affectionately known around the world as the pastor’s pastor, from Russia to Africa, from Eastern Europe to Asia, who heard God’s call and—sixty years of global ministry later—tells it like it is. He tells what God alone has done in revolutionizing multitudes of lives, lives of people who now live in his victory.

Fact can be stranger than fiction, stretching many and too much for some.

When he was eighteen, John Abraham left Britain to attend college in Canada. Twenty-five years ago, God repositioned him and his wife, Shirley, from Western life to global evangelism. In a remarkable way, God promised supernatural power and demonstration of it for their assignment. How God fulfilled His promise in their lives and the lives of so many is what Living in the Supernatural Dimension comprises.