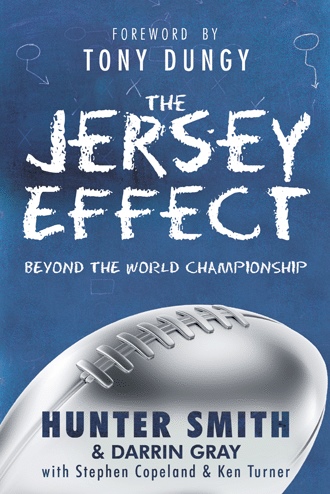 “Football builds character.” We hear that phrase so often that we take its truth for granted, without stopping to consider what is really being said. Football is the most popular sport in America today, and its players are publicized, and often idolized, to an unbelievable level. Our boys grow up wanting to play football. They are drawn by the excitement and the adrenaline rush the game provides. And we, as parents, want them to play football. Why? We are drawn in by the excitement as well but we often fall back on that axiom that participating in team sports builds character. And we view football as the ultimate team sport. If they play football, our boys will become physically and mentally tough! They’ll learn how to work together for a common goal and how to overcome tough losses and keep pushing toward that goal. We encourage our boys to sign up for the pee-wee football team because surely these lessons are all things that will benefit them later on in life. Because, after all, football builds character, doesn’t it?

I think we really need to examine that statement and not just accept it as gospel. If football really builds character, then the longer you play and the higher up the football ladder you go, the more it should benefit you. It would make sense, then, that players who make it to the NFL level and have a long professional career would reap the most benefits from the sport and have the most successful lives after football. But that’s not the story the facts tell. When you look behind the scenes, it appears that the higher up you go in the game, the more problems you have.

In major college football, it seems that every day we’re reading of eligibility issues, low graduation rates, and disciplinary problems.

On January 28, 2006, in an article titled “Life After the NFL,” USA Today reported that, in fact, 78 percent of all NFL players are divorced, bankrupt, or unemployed two years after leaving the game. And NFL players are six times more likely to commit suicide, citing the work of Ken Ruettgers, former twelve-year veteran player with the Green Bay Packers and advocate for players transitioning from professional sports through his organization, Games Over.

What do these statistics mean? Do they mean that football is an inherently bad game and we shouldn’t let our boys play, for fear that they’ll end up an emotional wreck? No, I don’t believe that at all. I played and coached football for most of my life, and I have a son playing college football now. What it does mean, however, is that football doesn’t build character any more than factories build automobiles. Our character is shaped by the people we are around, by our experiences, and by our beliefs about why God put us here on earth. And depending on how it is taught, football can be either a positive enhancement or a destructive force in that development.

This impact of football on the lives of young men is what The Jersey Effect is all about. Hunter Smith knows this subject very well. He was an outstanding football player who enjoyed success at every level of the sport. Hunter played in a tremendous high school program in Sherman, Texas, and then went on to star at Notre Dame. He played twelve years in the NFL, punting for the Indianapolis Colts and Washington Redskins. For seven of those years, I had the pleasure of coaching him with the Colts, and I got to watch him grow not only as a player, but as a husband, as a father, and as a man. Hunter was able to navigate the emotional roller coaster of big-time football—from highs like winning a Super Bowl to lows like fumbling a snap that cost his team a chance at victory (and he truly grew from both). This book describes how he was able to do that and not get swallowed up by success or disappointment.

It’s my belief that young people involved in sports need to grow academically, athletically, socially, and spiritually. That should be the goal of parents, teachers, counselors, and coaches. Unfortunately, as a professional coach, I saw too many examples of young men who had developed athletically but hadn’t grown in the other three areas. And that’s what leads to the frightening statistics mentioned previously. The Jersey Effect speaks to parents about the importance of not neglecting our children’s academic, social, and spiritual lives.

This book was also written with the young athlete in mind. Young men and women who are reaching for the stars are naturally driven. They thirst for the thrill and excitement of heated competition. They quest for the attainment of physical fitness and agility of mind when it comes to the sport of their choosing. And through it all, they need the love and guidance of parents, mentors, and coaches to avoid the pitfalls that often come when they strive to be the very best at what they set out to do. A message that is just as important, or even more so, is the need to find and keep a fully engaged relationship with Jesus Christ.

The Jersey Effect deals with many of the dynamics and issues that our boys are facing today, whether they’re athletes or not. Hunter and coauthor Darrin Gray, who works with an organization called All Pro Dad, do a great job of mapping out the best way for boys to navigate that journey to manhood, one that starts with following the spiritual guidance of Jesus Christ.

After Hunter’s first son was born, he and I had a lot of conversations about parenting and fatherhood. Now that his son is getting to the point where he is interested in football, we’ve talked about youth leagues and what should be emphasized in youth coaching. I know this is a passion for him, and he wanted to share with people how he and some of his teammates got the most out of their experiences in the game. If you have a son that is interested in sports or you work with young people in any capacity, this book will help you look at the process a little differently and aid you in helping them build the character we want them all to possess.

Author of the best-selling books Quiet Strength, Uncommon, and The Mentor Leader

The Jersey Eﬀect takes a look into the hearts and minds of athletes who achieved Super Bowl success and examines the battles they faced. It presents the stories of champions who desired to reflect glory back to God by using their “jersey” and the platform God had given them to make a positive difference in the world. Even so, sometimes their great intentions were hijacked by pride, materialism, distractions, and deﬁciencies within their own character that were never truly understood until the ultimate success had come their way. Intended for players, coaches, and parents that want to learn and in turn teach important lessons about how to properly align their love of sports with God’s heart, The Jersey Eﬀect advocates for a full 360 degrees of inﬂuence:  coach on player, player on coach, player on parents, parents on player, and team on community. The Jersey Effect demonstrates how to pursue the ultimate prize—a goal that has little to do with winning a championship ring and everything to do with how we can have a positive effect on those around us through the sports we love.

He was a multisport standout from Sherman High School and two-time Texas All State selection in football. Coming out of high school he was highly recruited and chose the University of Notre Dame, where he played multiple positions for head coach Lou Holtz. Hunter punted every game of his four-year career and graduated in 1999 with a degree in theology and sociology.

Hunter was drafted by and played for the Indianapolis Colts for ten seasons, during which he received many honors, including being named to the NFL All-Rookie Team and three-time alternate to the Pro Bowl. The Colts franchise recorded the most wins of any team in NFL history over the span of a decade under the leadership of Tony Dungy, Hunter’s greatest sports role model, including winning Super Bowl XLI to cap off the 2006 season. Hunter signed as a free agent with the Washington Redskins in 2009, where he played for two seasons. During his tenure with Washington, he rushed for a touchdown against the New York Giants and passed for a 35-yard touchdown against the Denver Broncos, becoming the only special teams player in NFL history to both run and pass for a touchdown in the same season. He officially retired from professional football in 2011. Hunter serves as director of the Sports and Culture Initiative at the Sagamore Institute, a national think tank based in Indianapolis.

Hunter captivates audiences with a powerful message that is full of humbling and humorous experiences. He is enthusiastic about exposing people to God’s truth and the world’s lies. Hunter has carried his message on national and international stages through his gifts of speaking and singing. Hunter is a professional songwriter and guitarist and is the lead singer for The Hunter Smith Band, which has a new album due out soon. He and his wife, Jennifer, reside in Zionsville, Indiana, with their three children Josiah, Samuel, and Lydia.

DARRIN GRAY has a unique window into the National Football League by virtue of his day-to-day involvement with All Pro Dad, Family First’s national fatherhood program cofounded by Tony Dungy and Clyde Christensen. Darrin interacts with NFL athletes, coaches, and alumni that serve as spokesmen for All Pro Dad, and he has conducted programming with over half of the NFL franchises. He develops innovative partnership strategies to reach families via special events, broadcast, and new media with the assistance of media partners and corporate sponsors.

He conceptualized The Jersey Effect years ago when he wondered what motivated some athletes like Tony Dungy to use their professional platform in sports, their jersey, to make a positive impact both on and off the field. A few years later he invited NFL punter Hunter Smith, while he was still playing in the NFL, to coauthor the book and to help him explore the many ways that sports shape culture, with the help of his world champion teammates and coaches.

Darrin began his journey with teams in the mid ’90s when he worked with all of the notable professional and amateur sports organizations on behalf of the Indianapolis Star, where he worked from 1992 to 2004. As general sales manager he directed a large staff responsible for $40,000,000 in annual revenue across multiple divisions: national advertising, sports marketing, and events marketing. In 2004 he became CEO of Brandirect, a corporate brand and communications consultancy that served many notable sports organizations, including the Indianapolis Colts.

He serves on several not-for-profit boards: National Association of Christian Athletes, Greater Indianapolis Chamber of Commerce, and Central Indiana Better Business Bureau. He is a passionate public speaker that enjoys inspiring audiences to reach their ultimate potential on topics that include strategic sports philanthropy, faith, family, and fatherhood.

Darrin graduated with honors in 1989 with a degree in theology from Hanover College. He volunteers as chaplain for the Home School Lions High School and Middle School football teams. He and his wife of seventeen years, Leslie, reside in Fishers, Indiana, and have three children.