The Catholic Faith and the Social Construction of Religion

With Particular Attention to the Québec Experience 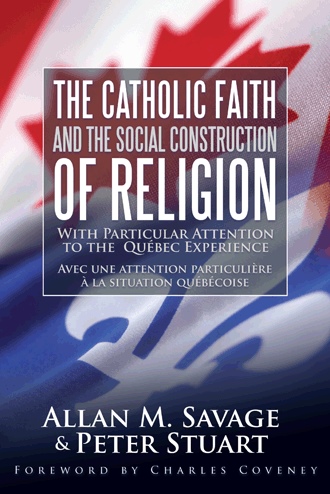 Chapter Two AN EXERCISE IN CRITICAL COLLABORATION BETWEEN ALLAN SAVAGE AND PETER STUART The Roman Catholic Faith in Québec as Articulated Through the Church: Keystone of ‘La Survivance’ Being Taken Away by Secularists Abstract The Roman Catholic faith, as articulated through its practice in the Church, has traditionally been the ‘keystone’ in the ‘arched bridge’ of French Canada’s civilization, particularly in the Province of Québec. The two main sections of this ‘arched bridge’ have traditionally been the preservation of the French language, in its distinct variations throughout Canada, especially in Québec, and the French culture. The traditional ‘binder’, ‘potentiating factor’, or ‘catalyst’, which has brought these two elements together, and created a ‘whole’ which has traditionally been greater than the sum of its parts, has been the afore-mentioned Roman Catholic faith, as articulated through its practice in the Church. However, since the Quiet Revolution of the 1960s, a new secular elite has emerged in Québec, which has actively begun to attempt to replace this ‘keystone’ factor with a series of secular-humanist ideas and institutions, all of which have so far failed to guarantee the society’s ability to successfully replicate itself in a linguistically, culturally, economically, and especially, spiritually ‘whole’ fashion. Only a ‘resanctification’, or post-modern ‘re-invigoration’ of the faith, as articulated through its practice in the Church, can successfully guarantee the ultimate ‘survivance’ of French Canada, especially in the Province of Québec, otherwise, this ‘Distinct Society’, as we know it, is doomed to extinction. In Canada, over the last fifty years, we’ve all pretty much come to accept that the province of Québec is in someway shape or form ‘different’ than the other nine provinces. The sheer weight of our Pan-Canadian history over this period bears this out, whether it be Québec’s seemingly ‘out of nowhere’, more aggressive coming of age assertiveness in the period after the election of Jean Lesage’s Liberal government in 1960, and its ushering in of the now ubiquitous Quiet Revolution reforms in health, education and social services, or the whole constitutional can of worms which ensued from this process, including the creation of the Parti Québécois in 1968, the October Crisis of 1970, the election of the PQ in November of 1976, the May 1980 and Oct 1995 secession votes, the patriation of the constitution in 1981-82, and finally, the Meech and Charlottetown constitutional crises of 1990 and 1992. All of this has left the casual observer of ‘La Belle Province’ somewhat miffed and bemused as to what exactly has been going on in Québec since that near death experience in October of 1995, when the whole nation, and even the whole world for that matter, held its breath in a sense of gaping, loathing awe, not being able to conceive that such a stable, constitutional democracy as Canada, could be on the brink of succumbing to some sort of self-inflicted kind of implosion-type death. One however has to look at the historical antecedents of this problem to find the genesis of this malaise, and to propose some possible solutions to rectify the problem. The heart of the matter calls to the notion of what Québecers and other French-Canadians have traditionally described as ‘la survivance’, or simply put: ‘survival’, by which they mean the survival of their civilization as a distinct ‘national’ entity. This traditionally was based on a cohesively-construed civilization which in years gone by was predicated upon what I like to describe as the ‘Holy Trinity’ of the French language, in its distinct group of Canadian dialectic variations, the Québécois and other French-Canadian minority cultures, including the Acadians, Franco-Ontarians, Franco-Manitobans, and so on, and lastly, in addition to these two main ‘arches’ of the ‘bridge’ of this civilization, there was traditionally what I describe as the ‘keystone’ of the ‘bridge’, holding the twin arches of French language and culture together in a cohesive whole, and imbuing them with a sense of spiritual purpose, holisiticism and destiny, this being the Roman Catholic Faith, as articulated by the Roman Catholic religion. By ‘holisiticism’, I mean that, like the word ‘holistic’ means itself, Québec civilization is not ‘whole’ unto itself, but that its ‘wholeness’ is greater than the sum of its parts, and that language and culture together cannot alone comprise a ‘whole’ civilization. A ‘potentiating’ factor or catalyst is needed to literally ‘bridge’ them together, creating an ‘entire entity’, or, something which is ‘whole’, in that the civilization, which is now imbued with the faith, as articulated through its practice in the Church, is now greater than the sum of its parts, and now through the practice of this faith, has an instrument, which can act as a repository, or channelling medium, through which the twin factors of language and culture can be vehiculated so as to guarantee that the civilization will be able to successfully replicate itself in the future, being a ‘Sine qua non’ of French Canada’s survival. The solution I will propose, therefore, is what I call the ‘resanctification’ of the faith as articulated through its practice in the Church, including changes within the institutional structure of the ‘corporate Church’, which include a re-emphasis on evangelization and outreach, but especially, that the faithful be given the tools to help the people that they meet on a daily basis come to believe in the need to develop a personal relationship with Christ, so as to bring them back physically, and therefore spiritually, back into the Church. These strategies will be discussed in broader brush strokes nearer the end of the piece.

The intent behind this book is to provide grist for the mill for research students and other interested readers. Chapter one, by author Allan Savage, presents an understanding of the social construction of religious activity, which maintains that social construction of religion arises from a dialectical engagement within the world from a phenomenological philosophical point of view. Co-author Peter Stuart presents a classical and traditional point of view, and readers expecting academic accord between the authors will be disappointed.

A further rationale for writing this book is that both Savage and Stuart desire to express their personal convictions in the public forum. Both have interests in the ebb and flow of civilization, especially as it pertains to the place of faith, religion, politics, and a variety of social phenomena, including economics, culture, gender, ethnicity, and the family, as well as the ebb and flow of money, power, property, and prestige, as articulated throughout history. They believe that writing about the place of faith and religion in French Canada is crucial if one is to understand the place that this ‘keystone’ civilization occupies within confederation and its enduring ambivalence regarding its belonging, or not, to Canada.

Peter Stuart is a graduate of the University of Ottawa, class of 1996, obtaining a bachelor’s degree with a concentration in Canadian studies, magna cum laude. He is a native of the Province of Québec, born in Montréal, and has spent most of his life in Québec city, where he works as an administrative assistant at the city’s English-speaking Roman Catholic parish: St. Patrick’s. He is of mixed ethno-linguistic origin: French-Canadian, English, Irish, and Scottish. He is a native English speaker in a city which is 94 percent French-speaking, and is also fluently bilingual. His writings have appeared for ten years both in English and French, in the Québec Chronicle Telegraph, Le Soleil, La Presse, and Impact Campus, one of Laval University’s newspapers. He publishes a blog: Politics in Québec and Canada, at ‘stup1276’, which not only deals with issues mentioned in the title, but also faith and religion in post-modern secular society, gender and family issues, social justice, America and its place in the world, international affairs, and North American continental integration. Allan Savage is currently pastor of St. Patrick’s Parish, Québec City, QC. His doctorate of theology is from the University of South Africa; his doctorate in scared theology is from the St. Elias School of Theology; and his doctorate of letters is via published works through the European-American University. He was ordained in 1978 to the Roman Catholic priesthood, serving in the Dioceses of Timmins and Thunder Bay in pastoral, clinical, and administrative positions. He was sessional lecturer in the faculty of theology at the University of Winnipeg and is the author of a number of books integrating theology, philosophy, psychology, and interdisciplinary thought, as well as contributions to various electronic and print journals.