Getting Your Breath Back After Life Knocks It Out of You

A Transparent Journey of Seeking God through Grief 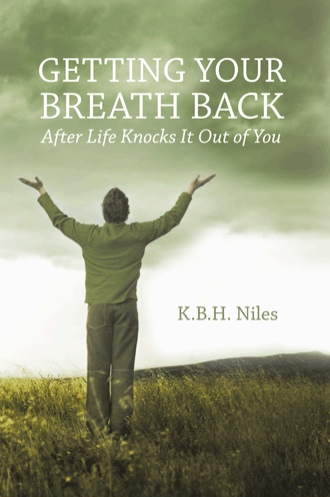 Excerpt from Chapter 1~ The Day I Lost My Oxygen

I'm sorry, but there was nothing we could do...she's gone," the doctor stated in a professional tone of voice on that life changing Thanksgiving morning. I felt as though my stomach and heart had been knocked out of me, then after the initial shock, as though I couldn't breathe at all.

My mind started spinning as grief, fear, shock, and anguish gripped my heart, "No...I don't understand! She was supposed to come home later today! She wasn't even that sick...she's only not felt well for a couple of weeks...she's only 22!" I immediately started crying and praying, hoping against all hope that God would somehow perform a miracle, wishing that I could rewind time, or that all of this could just go away. Sadly, that isn't how life worked out on that cold Thanksgiving.

Thanksgiving had always been a holiday filled with joy, love, gratefulness, and great celebration for our family. As I began to slowly walk to my sister's hospital room to view her lifeless body, all of the familiar holiday feelings of joy, love, gratefulness, and celebration were now being replaced with intense grief, anxiety, and heartache with each and every dreaded step that I took. Instead of enjoying Thanksgiving dinner together, making new memories, taking family pictures, and celebrating Thanksgiving like we always had as a family, we each began the process of being ripped wide open emotionally, raw with fresh grief...again.

I had already experienced the devastating deaths of my dad, grandparents, other family members, and several friends while growing up and our family was currently in mourning because my other sister's fiancé had just died three weeks before our oldest sister's death. Grief had certainly written many stories in our family, but no previous loss could have possibly prepared us for my sister's death.

Everybody has a grief story that begins the very moment death or loss hits them as they are catapulted into a grief experience they didn't sign up for. After we heard a code blue initiated on the overhead ICU intercom, my sister's death catapulted me into a heartbreaking grief experience that has been one of the hardest grief stories to unfold in my life.

My sister had been in the hospital for only a few days, after having what seemed to be severe allergies, so we were genuinely shocked to hear her room number attached to a code blue. I can not adequately describe the panic, confusion, concern, and heartbreak I felt the very moment I heard her room number called. This wasn't the first code blue we had heard that Fall morning. After hearing each code blue, I prayed for the unknown families and felt so sorry for their heartache, especially since it was a holiday. Then I heard the code blue that jolted our lives into a downward spiral of grief because the defining code blue wasn't coded to an anonymous room, to some anonymous unknown stranger this defining code blue was coded to my sister's room.

After hearing her code blue, I silently hoped that there had been a mistake, that maybe someone had coded the wrong room number. The wait was agonizing and we kept anticipating the doctor coming to the waiting room to say she was alright, that they had revived her. As we watched her doctor slowly walking towards us, the news we were given was heartbreakingly opposite of what we had hoped and prayed fervently to hear.

Immediately after being told of my sister's death, I didn't think it was possible to contain my excruciating pain and sorrow, but I had no privacy...and I also had no choice. I wanted to scream and cry out in anguish, but only tears would surface.

As I began to process the new reality of her death, my heart sunk with each and every step as I made my way to see her one last time. The pain was unbelievable as I approached her hospital room, realizing as I walked in that she wouldn't be alive...knowing she wouldn't respond...realizing I would never have another conversation with her...I'd never feel a hug from her again...or see her face light up with her little smile that I loved seeing every time I saw her...I would never have the opportunity to do anything with her ever again. All of the things we were planning to do were now gone. All of the things we had talked about doing in the future would never be. The special days we had been planning and preparing for would now never be anything more than a vapor. Anything the future could have held, suddenly and permanently vanished without warning.

They say that if there has been previous grief, it can resurface when triggered by new grief. I found this to be very true. My sister's death brought to the surface all of the feelings I had buried from previous deaths, losses, and past hurts. I missed my sister terribly and missed being able to talk to her as I had talked to her every day. She was the one I had always confided in about everything. Who was I going to call every time something good or bad happened? Who was I going to talk to when I needed advice or needed to vent?

Little did I know that God was paving the way for me to be totally dependent on nobody but Him. He was about to teach me many lessons about grief, loss, and life. My sister's death (and any previous loss) was just the beginning. God was about to take me on a custom designed grief experience with only Him so that He could teach me how to get my breath back that life had knocked out of me.

Is anyone crying for help? God is listening, ready to rescue you. If your heart is broken, you'll find God right there; if you're kicked in the gut, he'll help you catch your breath. ~Psalm 34:17–18, The Message translation

Has grief knocked your breath out of you?
Everybody experiences grief, loss, and life challenges throughout their lives. Most are unprepared for their grief and the impact it will have. Grief is brutal and has a way of making you feel as though everything good in your life is slowly being crushed, leaving you gasping for air.
Although painful to experience, grief is one of the most powerful teachers you can learn from. When one goes through grief or loss, the invaluable opportunity to understand, love, and know God better immediately begins—He is the key to creating a fuller, more purposeful life in spite of grief.
In Getting Your Breath Back After Life Knocks It Out of You, K.B.H. Niles transparently shares her experiences with grief and loss. She reveals how her relationship with God helped her grieve multiple deaths, including the deaths of her sister, father, and grandparents, after she found God in the midst of her pain.
How do you get your breath back after life knocks it out of you?
K.B.H. Niles explains key "oxygens" God revealed to her as she studied His Word during times of intense grief.

In Getting Your Breath Back After Life Knocks It Out of You, you will find how to:

• Develop a treasured relationship with God
• Regain your faith and hope
• Resolve bitterness, guilt, and regrets
• Find the encouragement you need during grief
• Understand the importance of relationships
• Value God's time through grief and life
• Realize the importance of grieving in your own unique way
• Develop gratefulness, thankfulness, and praise
• Experience wellness, traditions, and enjoyment
• Create a fuller, more purposeful life

While going through intense grief, K.B.H. Niles began to journal and research God's Word. As a result of going through the deaths of her sister, father, and other loved ones, Mrs. Niles founded Grief Bites where she encourages and helps others through their grief. Kim is also a popular inspirational speaker and a YouVersion author who has written several Grief Bites bible reading plans. Please visit www.griefbites.com for links to her YouVersion plans and blog