The Luxury of Daydreams 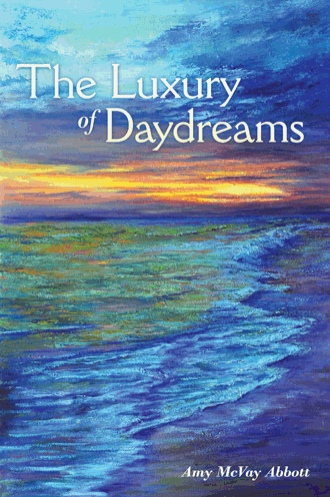 I have math dyslexia. Numbers just do me in. When God formed the two sides of my brain, He decreed that one side be ninetyfive percent poetry, words, talking, Joni Mitchell, more poetry, more words, and more talking.

The five percent of my brain representing spatial reasoning allows me to dial a telephone and add one-digit numbers. I struggle with using a calculator, and I did not fare so well in freshmen Algebra class.

Despite my lopsided hemispheres, today I called my first bingo game at a senior citizens center. This requires that I read and use numbers.

I arrived early with my prizes and already sixty people sat waiting for me. The game room temperature was a balmy 108 degrees. Most of the guests wore sweaters. This environment is incompatible with hot flashes and sweaty nervousness about reading and remembering numbers in public.

On the prize table, I put out the prizes I purchased at the neighborhood dollar store. I refer to the prizes as WPC—worthless plastic crap. These delightful parting gifts included hand lotion, sugarless candy, nail clippers, dishtowels, storage bins, a flashlight, a Groucho mask, a toothbrush, combs, a screwdriver, bunion pads, a birdfeeder, bunny ears, gum, and other eclectic WPC. This batch of prizes was of the absolute highest quality, all for less than one dollar. Imagine!

Did I mention the Groucho mask and bunny ears? My theory was these festive items might add a laugh and some fun. I was wrong.

At promptly two p.m., the facility manager was still talking with me, and the serious eyes of the players shot daggers at both of us. These folks were ready to go. B I N G O!!!!

The little white numbered balls rest in a gold apparatus, resembling a wire birdcage. The caller spins the gizmo, and six or seven white balls drop down into an open chute. The caller reads the number and fits the used ball on a huge white grid with all the numbers and letters on it. This is an easy task for those folks who are not numerically challenged.

Think of it like this: some of us are good at math and science. People with those attributes are called “doctors” or “engineers.” When these individuals view a group of numbers on a page, they see the theory of relativity, a chemical chain, or perhaps nuclear fission.

Others possess excellent skills in talking and writing. These individuals are called “sales reps” or “unemployed.”

Those of us in the second group are fond of saying, “Which of

Leonardo da Vinci’s skills would you eliminate, the math/science or the arts?”

This philosophical paradox makes for an interesting and provocative cocktail party discussion, or something to ask the person ahead of you in the unemployment line.

When I see numbers on a page, I think of a Jackson Pollock painting.

They look like scattered drips of paint that collectively have no meaning to me.

I blame this on President John F. Kennedy. I struggle with calling Bingo well because of “new math.” President Kennedy wanted young people to study math and science “so we can put a man on the moon by the end of this century.”

That darn American “Sputnik moment” really messed me up. I started first grade with old math, and by the middle of second grade, “new math” burned past me to a galaxy, far, far away.

Forty-something years later, add to that the problem of poor vision corrected with bifocals. Did I mention my two cataract surgeries?

I spun the machine and looked through the top of my glasses to read the number.

I liked how my voice sounded through the sound system. A little like Joni Mitchell and a lot like Broderick Crawford.

“You’re saying them too fast, honey,” shouted Alma from the front table. “Slow down.”

I felt I was crawling along, but Alma straightened me out. I used my bifocal to read the number and switched to regular lenses to see the cutout grid for the ball. The back and forth made me nervous and somewhat dizzy. And, I have to sound out the numbers phonetically in my head. “Zero, sixty-eight.”

Madeline, in the back row, quickly corrected me. “It’s Ohhhh, not zero.”

I felt that she wanted to add, “you ding-a-ling, what rock did you crawl out from under?”

Seven balls filled the chute. Then, I spun again. If I did not have the right touch on the wire cage, too many balls came out. I spun the cage too fast and four balls fell and bounced on the floor. I chased after them.

Everyone laughed as I bent over to pick up the rogue balls.

“I’m winning them over,” I thought, assuming their laughter was friendly. They were actually laughing at the sight of my behind. Then,

I said, “Sorry, folks, I have the first-time jitters.”

“Move on with it,” said a man in the back wearing a WWII hat.

“What branch of service were you in?” I asked. “God bless you for your service to our country.”

He said, “Battle of the Bulge.”

“Let’s give him a hand,” I asked the group to applaud this old soldier.

No one applauded. The man said, “Now can you just move on?”

As the games progressed, my calling skills improved. I did not drop any more balls, but I did have trouble remembering if it was game one or game two. This is easily explained. As a post-menopausal woman, I have less estrogen in my body than the old soldier from the Battle of the Bulge. This causes inability to remember which part of the game we’re in. Was it time to clear the board? Did we just clear it? Did I unplug the toaster this morning?

I made a joke out of it. “I’m having trouble remembering which game we are on. This is why no one wants me to play cards with them;

“Cut out the jokes, and move on, girlie-girl,” said the man in the WWII hat.

He was my favorite.

Each winner stepped up to the prize table after I verified the win and took a prize. The Groucho mask and the bunny ears may as well have been covered with bubonic plague germs. They did not move off the prize table.

“How about some bunny ears for the grandchildren?” I said, as two winners “bingo-ed” at the same time. Lurlene, who used a walker and sported shiny pink hair, said, “My grandchildren have their own grandchildren,” and took some dental floss.

This has not been the greatest day of my life for a number of reasons.

All day there’s been a cold, dousing rain. I just want to finish this endless hell of a game day and go home.

Unfortunately, we’ve only completed four games, but it feels like

I’ve been here since seven o’clock this morning. I know we were at game eight because I counted the prizes. I bought twenty-five. I can leave when five remain.

Wait—there is the Grand Prize, a ten-dollar card to Wally World.

Almost finished. I am spinning the birdcage apparatus and I hear Alma and her friends talking about me. They think they are whispering, but they are less than ten feet away from me and I can hear every word.

“She isn’t funny. Why does she keep telling those jokes?”

I want to scream, Ladies, I can hear every word you are saying, but instead I say, “I, nineteen, I, nineteen.”

In her debut book, Indiana writer Amy McVay Abbott offers thirty insightful and humorous essays about life transitions. In 2009, Abbott lost her job shortly after her only child left for college. Her mother was diagnosed with multi-infarct dementia, and what seemed logical for Abbott was to start writing it all down.

Through humor, Abbott weaves together past and present with future hopes and dreams after turning fifty. Mothers, daughters, aunts,and nieces will enjoy this spiritual and comedic journey.

Abbott also writes a bi-weekly newspaper column — The Raven Lunatic — for several Indiana newspapers. Visit her online at http://poetryfan.blogspot.com or contact her at amymcvayabbott@gmail.com.

Amy McVay Abbott lost her Fortune 100 corporate job within a few months of her only child leaving for college. After a thirty-year career and eighteen years of mothering, she was at a loss, with no job and her child a thousand miles away.

Abbott always loved writing, despite leaving her original career in journalism for health care sales and marketing. She jumped in to writing and reporting again, becoming the world’s oldest cub reporter. She has become a familiar local presence in area newspapers and magazines. Her column, The Raven Lunatic, runs in several Indiana daily newspapers, and she frequently writes at curated online sites.

Once she started writing, she couldn’t stop. The Luxury of Daydreams is part-memoir, part-comedy, and part-inspiration for women of a certain age who find themselves in transition.

Now a long-time resident of Warrick County, Indiana, Abbott grew up in Whitley County, Indiana. She is a proud graduate of the School of Journalism at Ball State University in Muncie, Indiana.

Many of her essays reflect her pride in the people and land of the Hoosier state. She and her husband, Randy, have one son. She enjoys traveling, reading nonfiction and history, attending theatrical productions, and photographing buildings and nature.