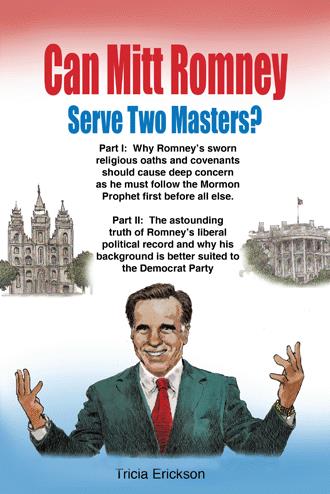 p>Part I (Spiritual Portion of the book)

Mitt Romney is a long-standing, card-carrying, prominent “temple Mormon.” Mormon temples are not places of worship. The temples are secretively closed to the public. Entrance into the Mormon temple is the utopia to strive for in Mormondom. Anyone who achieves “temple status” is by no means a casual Mormon. The primary mandate for a Mormon to be able to enter the temple is to be a consistent tithe payer of 10 percent of the gross of his income. No Mormon can enter without meeting this requirement.
The Mormon churches are completely different meeting places from the temples. The regular Sunday church weekly services are held in local church buildings known as chapels, meetinghouses, ward houses, or churches. The terms used for these buildings are interchangeable.
The Mormon temples, however, are closed on Sundays but open on weekdays, exclusively to card-carrying, temple-recommended Mormons. Closed to the public, only the most faithful followers of the prophet and the Mormon doctrine are allowed to enter. The rituals in the temples—especially the “endowment”—are considered so sacred that Mormons are forbidden to discuss them outside the temple itself.30
In fact, up until the 1990s, Mormon ritual participants were so sworn by oath to secrecy that if they revealed anything about these temple rituals, this act would be punishable by death. Here is the exact oath taken in the temple ceremony by participants:
“I will now explain the covenant and obligation of secrecy which are associated with this token, its name, sign and penalty, and which you will be required to take upon yourselves. If I were receiving my own Endowment today, and had been given the name of "John" as my New Name, I would repeat in my mind these words, after making the sign, at the same time representing the execution of the penalty: I, John, covenant that I will never reveal the First Token of the Aaronic Priesthood, with its accompanying name, sign, and penalty. Rather than do so, I would suffer my life to be taken.”
Mitt Romney and his wife regularly attended and participated in these temple ceremonies and rituals that consist of secret handshakes, tokens, vows, death oaths, secret names, and scores of additional bizarre proceedings. There are many websites and books which accurately depict these secret temple ceremony rituals.

Romney consistently likes to paint himself as a turnaround artist in Massachusetts, claiming he “closed a nearly $3 billion budget deficit without raising taxes” while governor. The facts do not back this up.
According to Reuters, “The $3 billion deficit projected by Romney and state legislators in January 2003 at the start of his Administration never rose that high because a surge in capital gains taxes more than halved the shortfall to $1.3 billion.”271
President of the Massachusetts Taxpayer Foundation, Michael Widmer told Reuters in 2008, “There’s never been under his [Romney’s] watch an economic turnaround to speak of … We added a few jobs over the last three years of his tenure, but very few. He also raised corporate taxes and the (deficit) gap turned out to be less than $3 billion.”272
According to the Boston Globe, “Romney’s success in steering the state through the fiscal maelstrom was one of his key achievements, but in the retelling he and his aides often overstate the accomplishments and understate the side-effects: big fee increases and pressure on local property taxes.”273
Romney proposed or raised so many fees, he earned the nickname “Fee-Fee.” Almost no Massachusetts citizen was immune from the fees he imposed. “Romney and Democratic lawmakers ended up approving hundreds of millions in higher fees and fines, making it more expensive to use an ice skating rink, register a boat, take the bar exam, get a duplicate driver’s license, file a court case, install underground storage tanks, sell cigarettes or alcohol, comply with air quality rules and transport hazardous waste,” according to the Associated Press.274
Carla Howell, co-founder and president of the Center for Small Government, and sponsor of a 2002 ballot initiative to end the Massachusetts state income tax, explained on the blog LewRockwell.com in 2007, “Each of the four years Romney served as Governor, he raised taxes—while pretending he didn’t. He claims he only raised mandatory government ‘fees.’ But government mandatory fees are nothing but taxes, and taxes are nothing but mandatory government fees.”275
When questioned in 2008 by the late Tim Russert on Meet the Press, Romney tried to explain himself.

Part l: Mitt Romney is both a participant and victim of the Mormon Religion. Mormonism is a well-masked cult that enslaves the minds of those raised in it. Did you know that Mitt Romney truly believes when he leaves this earth he will become a literal “God”, equal to Jesus Christ, and be awarded his own planet to “Lord” over? Mitt will call his wife, Ann, onto his planet in order to have continuous celestial sex to populate it with spirit babies who will then pop down (be reborn) to earthy mothers in order to walk out their own eternal progression to Mormon Godhood? This is not a joke! How can we trust the judgment of someone who truly believes these things? And it’s important for you to know that Senator Romney MUST follow the false prophet of the Mormon Church first, above all else, and blindly obey him.

In addition, Part 2 of this book reveals the astounding truth of Mitt Romney’s liberal political record and why his background is better suited to the Democrat Party. Romney will be a thorn in President Trump’s side for the duration of his Presidency. Mitt will do everything he can to destroy Trump from within while elevating himself at every turn…all the while planning another future run for the OFFICE OF THE PRESIDENCY OF THE UNITED STATES OF AMERICA.

Tricia Erickson is a Political Pundit, President of Crisis Management Incorporated and also President of Angel Pictures & Publicity. She is a media, image and political consultant. Additionally, she’s the publisher of the web news site, www.TheConservativePundit.net. Tricia has opined on numerous national television and radio shows on the subjects of all things political, Mormonism, Islam, Hollywood and more.

Tricia, as a former Mormon Bishop’s daughter and Mormon wife, went through the cultic, symbolically violent and bizarre Mormon secret temple ceremonies revealed in shocking detail in this book. After she left the church, it took many years to deprogram from the lies, strange ceremonies and strategic misinformation that continues to be fed to all Mormons.

The Romney’s continue to attend and participate in these secret temple ceremonies as they are prominent members of the Mormon Church. They also truly believe that Mitt will become a literal god and be awarded his own planet to lord over. As a god, Mitt will have control over where Ann ends up in the afterlife. If he chooses to summon Ann on to his planet, he and Ann will populate their planet with spirit babies that will, at some point, be rebirthed on earth to walk out their own eternal progression to godhood. This is not a joke!

Think about it. If the Romneys do not possess the judgment to discern the outrageous deception within their own religion, how can we possibly trust their judgment to preside over our country?

While Mitt Romney “says” that he will not run for President again in 2016, his actions beg to differ. Will he run again? Should he run again? He is certainly following the same game plan that was enacted during his 2012 run of both raising money, and donating his own money to Republican candidates, with the anticipation of reciprocation down the road. And if Mitt doesn’t run again (I believe that he will), he has padded the pocket linings of so many Republican candidates and officials that he will certainly wield control.

Under Barack Obama’s leadership, our country does not even resemble what our forefathers fought for in order that we, as a nation, could prosper and enjoy life, liberty and the pursuit of happiness. This nation cannot afford to make another mistake in 2016. It is imperative that we place a sound minded leader in the Office Of The Presidency, and Mitt Romney is not the one. Mitt Romney lost to President Obama in 2012. Will we allow him to once again fulfill the definition of insanity by doing the same thing all over again and expect different results?