TWISTED BY THE WIND

A Journal of Inspirations, Conversations and Imaginations 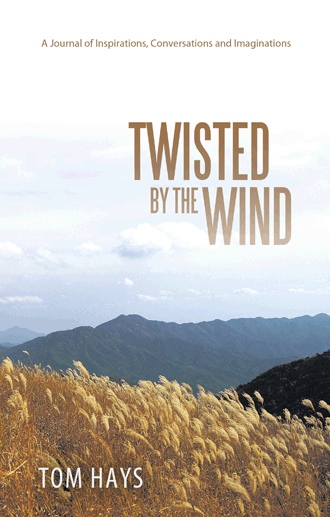 Twisted by the Wind is a collection of stories and words of wisdom, with a fair amount of humor added. It chronicles a philosophical spirit developed on the plains of Oklahoma, the Arizona desert, Nashville, and the wine country of California, honed through a lifetime of entrepreneurial endeavors and adventures. Tales of first flights, free meals in the park, car racing, life in a monastery, following a musical dream, and wisdom of the ages are all wrapped in a collection of quotes, short stories, poems, and personal revelations. Designed to be a catalyst to spark readers’ inspiration and creativity, you can open this book anywhere and find a fresh thought or idea to make life more enjoyable and to share with others.

Tom Hays is an artist and writer and a serial entrepreneur, previously owning and operating a variety of business ventures. Tom also compiles and publishes quotations through his website, PearlOfTheDay.com, which emails inspirational and motivational quotes to subscribers daily at no charge. He established this ministry more than ten years ago, and it has grown to hundreds of recipients daily plus thousands of readers on various websites where the “Pearl of the Day” appears. He has recently released his second book, "Seeds Into The Wind: One Thousand Days of Timeless Wisdom", which is a compilation of inspirational and motivational quotations. Tom has been in the retail optical business, owned an advertising agency, an audio/visual production company, built a chain of thirty-eight automobile quick oil-change centers, started a food packaging and marketing company, and owned a market research company, conducting radio listenership research in 105 radio markets in the United States. He was also a principal in several other private and publicly owned companies, including those involved in oil and gas exploration, music production, greeting cards, and business acquisition. He is also an ordained minister. Born in Oklahoma and having lived in Nashville, Tennessee, and the Napa Valley in California, Tom and his wife Susan currently make their home in Scottsdale, Arizona. Tom enjoys painting, silversmithing, ceramics, design, songwriting, website development, and writing stories.