Why on Earth Are There Churches?

The Biblical Mission of the Local Church 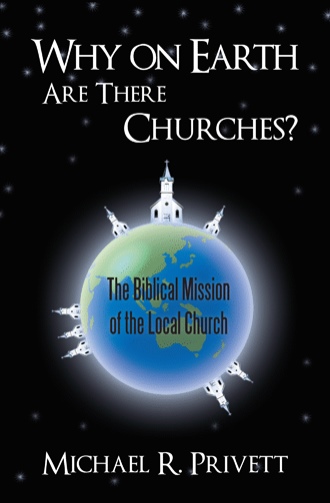 I participated in a preachers' meeting out in California in June 2006. My wife and I saw this trip as an opportunity to save up and bring our three children to visit the Golden State and see some of our National Parks.
Having lived in Virginia most of our lives, we were captivated by the beautiful sites. The huge elephant seals sunning along the Pacific Coast Highway fascinated us. The hot and parched Mojave Dessert mesmerized us. The height and power of Yosemite Falls amazed us. El Capitan, a granite monolith at an elevation of over 7,500 feet in Yosemite National Park, awed us with its vastness.
My most awe-inspiring experience, however, was visiting the massive Sequoia trees in the Sequoia National Forest in the Sierra Nevada mountains in eastern California. Under the snow-capped mountains of the Western Divide, we visited General Sherman's Tree, Chimney Tree, Tunnel Log, and Auto Log. These are the largest trees on earth. We drove through a tunnel carved through a Sequoia tree that had fallen across a road. We hiked through the forest made up of hundreds of these trees. We discovered that man's effort to put out forest fires have hindered the Sequoia National Forest from reproducing since the football-sized pine cones require the intense heat of a fire for it to open and spread its seeds. I also discovered another important truth: the importance of studying the gigantic Sequoia trees within the context of their setting—the forest.
Oftentimes in theology, we become so fascinated with the "trees" that we neglect to see the "forest." Both perspectives are important. Regarding the local church, volumes have been written on the "trees" of church polity, officers, ordinances, music, worship styles, ministry, community outreach, benevolence, gifts, growth, evangelism, preaching, teaching, programs, dogma, traditions, history, administration, counseling, discipleship, mentorship, and many more topics. These matters capture our attention and require our energy especially when they become diseased, damaged, or compromised.
But let's not lose the "forest" in the study of the "trees." It is important that we take a look at the "big picture" as depicted in the Word of God and not become so focused on dissecting a "tree" that we miss out on what the Lord wants for the church. The "forest" represents the answer to the question: "Why on earth do we have churches?" Before we begin to study the "trees," it is good to understand the cause and reason for the "forest." In other words, before we begin to study and debate the various topics regarding the local church, it is wise for us to understand the reason for the existence of the local church in the first place.
It is my goal that this study will help us to take a few steps back to see the "big picture" depicted in God's Word regarding the local church so that we may better answer questions regarding individual "trees" with the whole "forest" in mind. I believe that the Word of God is the first and best source to find the answers to the question: "why on earth do we have churches?"
After over twenty years of study the Scriptures, I believe that God is the originator of the church. It has been in His plan long before it was born and revealed in the New Testament scriptures. Contrary to what some think, the local church is not man's invention nor a byproduct of his own human wisdom. The Lord God originated and instituted the local church for His glory. What "the glory of God" means will be explained, defended, illustrated, and demonstrated in the following pages. In addition, He instituted the local church to accomplish specific objectives for the praise of His glory.
Let's agree that just because something is green doesn't mean that it belongs in a healthy forest. Likewise, just because something meets in a church building doesn't mean that it is fulfilling God's mission for its existence. For instance, many so-called "churches" are no more glorifying to the Lord than a plastic plant belongs in the forest. Just because it looks real doesn't mean that it is alive and authentic. Sadly, many churches today give the appearance of life, but are simply artificial. Conversely, many other so-called "churches" are no more glorifying to the Lord than fast-growing kudzu—a green, fast-spreading vine that often kills plants and trees wherever it grows—belongs in the forest. Sadly, many churches today are busy and growing, but ultimately detract from God's glory. Both of these types of churches and the people who lead these ministries may be described as "having a form of godliness, but denying the power thereof: from such turn away" (2 Timothy 3:5).
Lastly, consider the argument that just because "everyone is doing it" does not mean that it is God's will and plan. That type of universal argument is often accompanied by the tactic of name-calling for those who do not jump on their bandwagon. The truth of the matter is that it is much easier to "go with the flow" than to "swim against the current." The swift currents of a river often pull one toward turbulent rapids and sometimes a disastrous waterfall. Unfortunately, some do not discover these dangers until it is too late. Be cautious about following others in the main stream who do not know what lies around the next bend in the river. I prefer to obey the Words of the Guide Who knows what lies before us.
So let's open God's Word and see the local church from His perspective. Let's permit God to describe the "forest" as well as explain the different "trees." After all, He is the Lord God; He originated and gave the church its mission and objectives. Let's lay aside our preconceived ideas as well as the books of popular writers and look into God's Book to see His plan for the local church.

After years of observation, I have concluded that so many local churches function without regard to their God-given, biblical mission and objectives because of their unclear mission, their unbiblical targets, or their unbalanced objectives.

The Lord God has already given His church a clearly defined mission for the present age. Yet so many local churches seem to function without understanding their biblical mission—their God-directed reason for existence—while other local churches and their leaders have revised or even compromised their God-given mission, thinking that they know better than God.

Some churches disband Sunday school, dismantle the choir, and disassemble pews only to replace them with other programs and ideas that will become traditional soon enough. Traditions, customs, and worship styles vary from culture to culture and from generation to generation.

I’ve been in the gospel ministry long enough to have seen the pendulum swing back and forth a time or two. So many ministries, programs, concepts, and styles are not new, but just repackaged. Today’s “new,” “fresh,” “blended” methods will become “traditional” to the next generation after a short period of time.

Too often we are more involved in following the latest fad than we are in striving to “do all to the glory of God.” What really matters is whether you have presented a true and accurate opinion and view of the nature and character of God so that others will praise and exalt Him to His worthy place of honor, esteem, and excellence.

After completing seminary and serving as an assistant pastor, Dr. Michael
Privett planted a Bible-centered church in Williamsburg, Virginia, and served as its pastor for twenty-one years. He currently serves with mission agencies, assists church planters, and travels internationally to teach on the biblical mission and objectives of the local church. www.michaelprivett.com