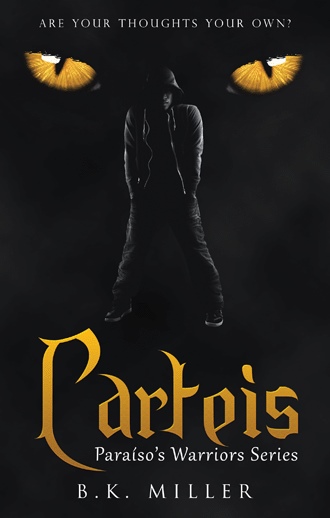 He noticed a flash of light near the foot of his bed. He looked down: Covering his feet were a pair of silver shoes like the kind you see in a suit of armor. On the sides was the letter “P.” The shoes of peace!

Carteis sat straight up and immediately noticed that the belt and breastplate had also appeared! He was excited until he remembered what Sara had said: The armor only appears when a sombra is nearby!

Carteis felt his heart begin to race. He began to feel trapped in his own bedroom.

The bedroom door was closed, but suddenly of its own accord it creaked open a little ways and then stopped. Carteis breathed in and out heavily—his armor rising and falling with every breath. Even with armor on, he felt defenseless. He suddenly remembered the Book of Light and grabbed it up; sombras were apparently afraid of this thing. He opened it up with trembling hands and aimed its light at the door’s opening. If the creature tried to enter, it would have to go through the light.

Carteis watched in horror as clawed fingers curled around the doorframe. They were monstrous black claws belonging to an enormous creature!

Carteis gasped and aimed the light at the clawed hand. A deafening scream pierced his ears which startled him so badly that he dropped the Book. The room got suddenly darker as the Book closed—lying on the floor out of reach.

The door creaked open a little wider. Carteis’s mind raced—debating between grabbing the Book and taking his eyes off the door. He watched as the clawed hand repositioned itself on the doorframe—more of the elongated claws visible than before. His eyes scanned up to the top of the doorway; near the ceiling from just outside the door was a pair of yellow eyes.

Carteis jumped off his bed and grabbed the Book, but before he could open it an enormous winged shadow filled the room—knocking Carteis to the floor. His head slammed against the bed and at first he thought he’d been knocked out because everything went dark; the dark shadow must have completely shut out all light from the room. Carteis felt for the Book in the dark and upon finding it immediately opened it; a ray of light shot out piercing the darkness.

There was a moment of chaos as a giant flutter of dark wings filled his vision. In the next moment—perched on his brother’s bed on all-fours with wings spanning one end of the room to the other—was a dark creature with the shape of a criado but with the temperament of a wild animal.

Carteis remembered what he’d said about refusing to stay hunkered on the floor the next time Enfado showed up, but now that the moment was here he was having second thoughts.

Enfado let out an ear-piercing roar—revealing a mouthful of massive fangs.

Carteis forgot he was holding the Book open and allowed it to close. The creature noticed before he did and flew at him in an instant—pinning Carteis on his back with its massive weight on top of him. He looked up at the sombra that was now inches away from his face. The yellow eyes were like cats’ eyes—with vertical slits for pupils. He could feel the creature’s sultry breath in his face.

His mind was frozen; he couldn’t think. He knew he needed the Book of Light but it was out of reach; it had flown out of his hands at the moment of impact.

Suddenly, Carteis remembered what he’d been told: “Sombras tremble at the name of the Prince. One mention of His name and they’ll flee.”

Was that really true?

“The… Prince,” Carteis struggled to say.

The moment the word “Prince” left his lips he felt an immediate release as the sombra jumped off of him with a giant flap of its wings and landed on his bed—roaring in anger.

Scrambling to his feet and grabbing up the Book of Light, Carteis darted for the door. He raced down the hallway into the dark living room—immediately flipping on the light. Opening the Book of Light, he aimed its light down the hallway to his bedroom door. The creature couldn’t leave his room without being hit by it. At least, he hoped it couldn’t.

After a few unnerving moments, Carteis’ breathing began to slow to a normal rate. Had the creature left?

He wasn’t about to take a chance of it still being there. He stood for a couple minutes that felt more like a couple hours—holding the Book’s light out in front of him. Finally, he got up the nerve to approach his room. He slowly made his way back down the hallway, heart pounding in his chest. When he reached the doorway where the door was already open, he stepped quickly into the room—the light aimed toward his bed.

Carteis breathed a sigh of relief and, looking down, noticed that his armor was also gone. The creature was a safe distance away.

When his family came home, they found him already asleep and didn’t disturb him.

Fourteen-year-old Carteis is tired of supporting his friend Justin’s drug habit. After a mysterious midnight visit, they soon discover that they’re not alone. Armed with the Book of Light, Carteis sets out to rescue Justin from the dark shadows that hold sway over his friend. Are Justin’s thoughts of violence and self-destruction originating with him . . . or from another source? “B.K. Miller has given us another entertaining, riveting, fast-paced novel in the same genre of Frank Peretti and C.S. Lewis’s Chronicles of Narnia . . . We can see the world of warfare for the souls of people and families. It is a timely book for our age. It instills hope and confidence in the Power of the Prince of Heaven over the enemy. Get it. Read it. Share it with others!” —Timothy Lewis, Senior Pastor of Bethel Baptist Church in Troy, IL “We have our own ‘female Frank Peretti’ in our midst (and I don’t say that lightly!!).” —Mark Jones, Worship Pastor of First Baptist Church O’Fallon, IL “I loved the parts in Raquel [Book 3] where she went to ‘heaven’... Wanted to ride that white horse myself… Overall a fine contribution to fantasy.” —Marianne Hering, author of the bestselling Imagination Station book series