The 7 Forms of Deception Each Christian Must Overcome

by Julius A. Agbor 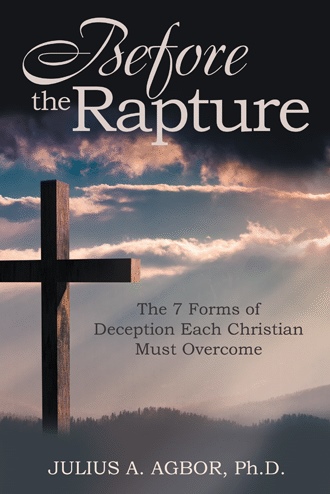 Preview of the book “Before the Rapture”

Whether we believe it or not, we are living in the last days: Jesus is coming soon—and perhaps sooner than we expect. Like the early Christians, who became somewhat exasperated and frustrated about the procrastinated return of the Master, modern-day Christians are also committing the same mistake of sidelining the message of Christ’s second coming and, thereby, failing to maintain the appropriate posture of soberness and vigilance that is required of them. Failure to maintain the appropriate posture in waiting for the Master’s return creates a kind of dysfunctionality in a Christian’s relationship with God with significant adverse eternal consequences as this book unveils. This book is primarily addressed to all those who profess Jesus Christ as their Lord and Savior or, in other words, to all Christians, irrespective of religious affiliations or denominational ties. Ministers and Sunday school teachers will also find this an invaluable resource in discipling their flocks.

The book is further recommended to the curious reader and anyone desiring to know more about Jesus Christ and Christianity in general. Accordingly, a significant number of chapters in this book are addressed to modern-day Christians and the church, while the last chapter specifically addresses the needs of yet-to-be Christians. The purpose of this book is to help prepare modern-day Christians for Christ’s imminent return. This author senses an intense burden to educate the body of Christ on the expectations of the Lord Jesus Christ for His church at the soon-coming rapture, as specifically articulated in the book of Revelation, chapters 2–3. References in other portions of Scripture (Ephesians 5:27) instruct that Christ is coming back for a glorious church that is without spot or wrinkle.

Interestingly enough and due to His great surpassing love for us, the Lord Jesus has not left us second guessing on what He expects of us before the rapture. Rather, He has taken the pains in Revelation, chapters 2–3, to educate us on His assessment criteria with the intent that each Christian would conduct an honest self-evaluation of his or her spiritual life and make appropriate adjustments before the day of reckoning comes. It is my heart’s sincere desire and prayer that anyone who reads and digests the content of this book will behave like the five wise virgins who were found ready at the unannounced arrival of the bridegroom (Matthew 25:1–13). Of course, failure to be watchful and prepared has eternal consequences, so be warned.

This book attempts to fill an important void in the traditional message of the church today that has systematically ignored and sidelined the teachings about the Lord’s imminent return. Sadly, many gospel ministers today are not preaching Christ’s second coming much less preparing their flocks to deal with the multiple challenges of the end times. There are others who are unable to give an altar call during their church services and, thus, are conspicuously failing to assist seekers with the next crucial steps in their walk of faith. Consequently, many in the body of Christ today are conducting themselves as if the message of the soon-coming rapture and Christ’s second coming is a hoax. What a pity! But guess what? This great deception of the believers is itself consistent with the signs of the end times:

And many false prophets will appear and will deceive many people. Sin will be rampant everywhere, and the love of many will grow cold. But the one who endures to the end will be saved. And the Good News about the Kingdom will be preached throughout the whole world, so that all nations will hear it; and then the end will come (Matthew 24:11–14).

This book is written for a general Christian audience and not for a scholarly audience; as such, I tried as much as possible to keep things simple. Notwithstanding, it is worth emphasizing that my eschatological viewpoint derives from the Assemblies of God statements of fundamental truths that affirm a futurist interpretation of the book of Revelation, a pretribulationist view of the rapture, and a premillennialist view of the millennium age. Although this book conveys a strong eschatological message, it is not intended as a resource guide or reference in eschatological matters. Reference should be made to more advanced resources for a detailed eschatological study. The author draws heavily on both personal revelations of Scripture and biblical research in presenting the ideas contained in this book. Unless otherwise stated and as noted, the Scriptures quoted in this book are drawn from the New King James Version (NKJV) and the New Living Translation (NLT) of the Holy Bible.

The book is structured as follows: Chapter One summarizes the biblical evidence surrounding the rapture and Christ’s second coming. Chapter Two reviews the historical context of the first-century Christians to which the Lord’s seven edicts were originally addressed. In these last days, the primary weapon that is being used by the enemy in defeating the church of Jesus Christ is deception, and this deception comes in several forms—namely, false teaching, idolatry, indifference, pride, lasciviousness, spiritual apathy, and disloyalty. Each of the next seven chapters is devoted to a detailed consideration of a specific aspect of this deception. Thus, Chapter Three focuses on the deception of false teachers (the doctrine of Balaam, the spirit of Jezebel, and the practices of the Nicolaitans) whose primary goal is to deceive Christians and lead many astray. Chapter Four addresses the challenge posed by the deception of idolatry, while Chapter Five discusses the deception of overconfidence and self-satisfaction. Chapter Six examines the deception of failing to pray in the Spirit, while Chapter Seven focuses on disloyalty and unfaithfulness. Chapter Eight considers the deception of pride, while Chapter Nine focuses on the deception of lasciviousness. Chapter Ten addresses some of the questions that concern the inquisitive reader about Christ and Christianity, outlines the steps to becoming a Christ-follower, and offers a conclusion to the book.

Before the Rapture is a timely message for Christians in these last days of the church age, soon culminating in the rapture of the true believers. The book intends to help its readers escape the soon-coming wrath of God upon the earth by being adequately prepared for the soon-coming rapture of the true believers. The uniqueness of this book is in the fact that it clearly exposes the enemy’s deceptive strategies, which—if not mastered—will cause many Christians to miss out on the day of the rapture.

Dr. Julius Agbor is an author, professor, economist, and pastor. He is a licensed minister of the gospel with the Assemblies of God USA and the founder and lead pastor of CityReach Church Irvine, California. He is also a full-time professor at Vanguard University of Southern California. He is happily married to Belinda Obi, and both he and his wife are originally from Cameroon. They have three biological children—Fred Clancy, Paul Richnel, and Chrisma Esther—and an adopted daughter, Dorcas.