What Was Possible God Made Known

How Else Would We Know? 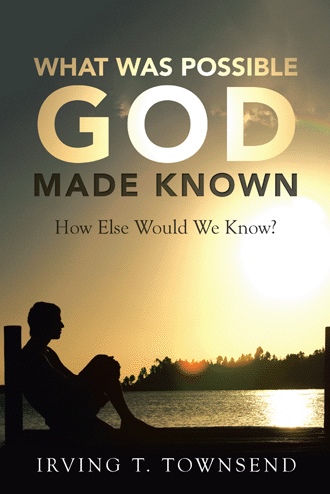 Meanwhile, it was time for me to experience a visitation from what could have been one of Satan's princes if not Satan himself. About midday, I was alone in the warehouse having lunch. At a distance of about twenty yards there appeared a huge black scaly creature the size of a grown gorilla. Its face was however more refined than the curvy contouring features of the face of a gorilla. Its eyes were fiery red and piercing. With folded arms it assumed the stance of one who was sending a threat and daring its opponent. It occurred to me as if its mission was more that an assignment given, but rather significantly of a more personal matter. He seemed contained but there was no visible evidence of physical exertion. Probably it had to do with the realm of the spirit world where the servant of the Lord is hedged in so he was somehow hindered. Maybe it had to do with the assigned angel of the Lord encamping around the servant of the Lord and protecting him. All this while I looked intently at the enemy while he looked back with no less a degree of intensity. My deliberate purposeful scrutiny was however without fear. By this time I had been made to become a seasoned battle axe and a weapon of war. Like encounters had become fairly commonplace. Without much more to its visit, the creature left the realm of the visible and left me to ponder the true nature of its appearance. Evidently the Lord wanted to underscore the importance of the mix up in which I was.

In the story of the man with snake images being cast on screen-like backgrounds, there is the account given of immense suffering and pain. Now it is one thing for the Lord to allow the images of demons in the man to be reflected on screen-like backgrounds before him, but there was difficulty in understanding the reason for the severity of the level of pain inflicted on the poor man. There would appear a stiffening in his chest accompanied by severe pain not experienced before, and therefore very difficult to be described or be explained. Except for a single occasion he could recall, these attacks usually take place at night time.

There were no patterns to their appearances and there was no one but God with whom could share. Understandably, it was an absolutely incredible story to be told and only God Who is aware of it could attest to it. It was usually more challenging when his wife Novelette, -not her real name- was home. No deep groaning was possible as when he was alone. No audible expression of calling on the Lord. He could scarcely apply the intense vigorous rubbing to his chest as when he was alone. The occasions of her absence were fairly frequent, they had to do with the nature of her employment. Besides being resident on location she was also required to overnight elsewhere and sometimes at overseas locations as well.

When he was alone he could be more deliberately vocal in his call on the Lord. He could groan aloud and vigorously rub his chest where the pain was concentrated. After a few minutes -sometimes longer than at other times- thank God he would get some relief. The single occasion on which he recalled having the attack in the day was an early morning incident when Novelette was home. It was among the worse he had had. Overtime, thankfully, he had practiced to indulge in spontaneous praises in response to certain matters. On this occasion likewise, he just praised and worshiped which for Novelette, was not unusual.  After being forced into some bathroom activities, he experienced a great relief from the pain in his chest. With great eagerness he hastened to use the face basin as background screen to see if the creatures inside of him were projected; sadly, though he was truly relieved from the intense pain, it was not to be what he ultimately desired. It was not to be his day of full deliverance, as he might have achieved some level of victory but certainly not fully what he had hoped for.

His also is another story of: "what was possible made known."

If the experiences and other answers provided in this book were accounted for in any of the many books I have read, then there is a certainty that I would have been spared the agony and the loss of time and other resources due to ignorance and a misguided lifestyle.

The tabooed subject of demons is reserved for fiction and is considered the figment of the imagination of the people of the medieval times. It is now fashionable to dismiss the subject based on one’s status and the persons with whom one associates. The book accounts for personal encounters with the unseen and details the painful struggles of the author to break from the grip of an orchestrated demonic spell.

The book declares also that the theory of evolution, by its own account of the process, irreversibly leads to a supreme being. Disaster, disease, and destruction provide knowledge necessary for the eternal state, and God is unwilling to let mankind enter eternity as ignoramuses. There are benefits to be gained from the materials of this book, and I believe the experiences and thoughts shared will improve in significant ways the lot of every reader and others with whom they share these gains.

In most of his late teen and early adult life, Irving Townsend had serious struggles with the concept of a personal God. At the age of twenty-nine however, there were unexpected encounters with demons and devils and with God. The evidences are irrefutable.

After he met the Lord, he served as director of Home and Overseas Missions with Open Bible Standard Churches of Jamaica for nine years. A sermon at the funeral of a slain policeman, earned him the wrath of the media and rights groups including Amnesty International. He was unswayed by the avalanche of media publications and discussions and firmly stood his ground.