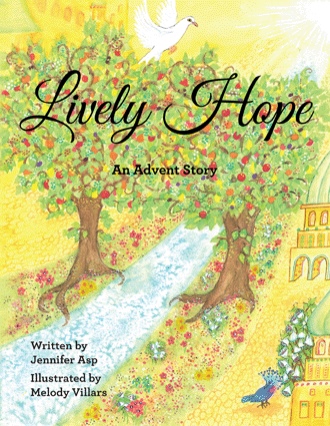 There always were some of God’s people who loved Him and the people carried the seed of hope in their hearts. Some of His people remembered God’s promises and longed for the Someone to come and defeat the snake.

Finally, when the time was right, God sent the Someone. It was His own Son, Jesus. God chose a young lady named Mary who remembered His promises and carried hope for the Someone in her heart. In fact, she carried hope so well, God said she could carry His Son. After years and years awaiting the promise, the time came. Jesus, the promised Someone, was born into the world. God came to live with His people. He came to be one of us.

Throughout the long years of waiting, God made many promises about the Someone who was coming. Promises of where He would be born, promises of what He would do on earth, and promises of how this Someone would change everything. Jesus fulfilled each one. He was born in Bethlehem just as God had promised. He brought good news to the poor. He proclaimed freedom to the captives. He gave sight to the blind. He also came to fulfill the ancient promise – He came to defeat the snake.

Satan (who had been disguised as the snake) tempted Jesus, just like he had tempted Adam and Eve to eat from the Tree all those years before. But this time, it turned out differently. Jesus was faithful to His Father. All the hope God planted through the years pointed to a different kind of tree—the cross of Christ. It might seem odd to talk about the cross in the season of Advent because Advent is the time when we spend so much time thinking about Jesus coming as a baby and coming again as our Forever King. But the cross is the center of the story. It is why He came. It is the part in the story where our broken peace changes into real, true peace with God.

Advent is the four-week season that prepares the church to celebrate Christmas by remembering Jesus’ coming to earth. But the story of Advent really stretches all the way back to Creation and all the way forward to the new heaven and new earth. Woven together, the Bible’s stories show God’s desire to be with His people through history—and lead us all to our Lively Hope.

Jennifer Asp lives in Plymouth, Minnesota, with her husband and two children. She earned her BA from Baylor University and her M.Ed. from Boston University. She has taught and written curricula for students from elementary school to college and has published two workbooks for adult education. She loves homeschooling her children, reading, studying scripture, and writing Bible studies for women.

Melody Villars has a studio art degree from the University of Minnesota. Her award-winning, whimsical clay sculptures can be seen at www.melodyvillars.com. She also loves to paint, do calligraphy, and play the piano. Illustrating these scenes from God’s story of hope became a great blessing for her.