The Story of Micah

A Life Full of Miracles 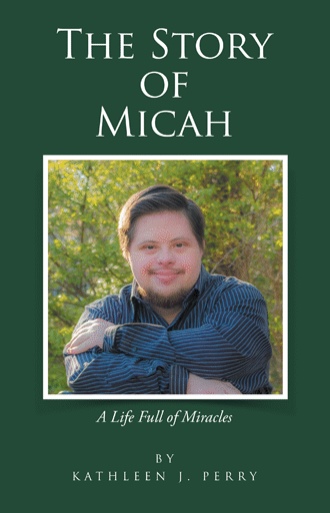 The name Micah means, "Who is like Jehovah." We did not know the name we chose for our new son would be so important in defining who he would become. We did not know that his name would have such purpose and significance!

The sun was streaming through the hospital window, casting a warm golden glow throughout the room. Henry sat next to us marveling at our newborn son. What I did not notice was the concerns on the faces of the nurses that were coming in and out of the room that early December morning.

As I pondered each detail of Micah's tiny body from head to toe, I was ecstatic. As he gazed up at me, I watched his little tongue peeking in and out of his tiny mouth. His eyes were a stunning cobalt blue color and sort of almond shaped, and his nose small and flat. His round face, framed with fine dark brown hair was just long enough to cover the tops of his tiny ears. I commented on his tiny fingers being short and stubby. He reached out to grab my finger, and I began to laugh. He did not look like any of our other children I remember saying. His small arms and legs felt a little limp and floppy if I did not hold him tightly in my arms. Tenderly pulling him closer, I was oblivious to what the nurse inside of me learned to assess. I was a new mother adoring her perfect newborn child.

It was still early, and the pediatricians routinely did their morning rounds. When a baby was born, the doctors would come in to do the initial newborn physical. I assumed it was routine when the doctor arrived. The nurse asked if she could take Micah over to the infant warmer for the pediatrician to examine. She picked him up and gently placed him in the crib. I remember intently watching the doctor listening to his heart and lungs with a stethoscope, bending his arms and legs, and checking his muscle tone. Suddenly she turned to me with a nauseating expression on her face. She stood far away from us backed up against the wall. Her words were like cannon balls coming toward me in slow motion shattering my peaceful world. When she spoke, I did not quite understand what it was she was saying. She said, in a scolding tone of voice, "Kathy, I am so disappointed in you. You are a nurse and know how important prenatal testing is. You should have had the testing done. Testing can detect this kind of chromosomal defect before birth. You could have saved yourself all of this heartache. We suspect your baby has Down syndrome!"

Looking over at Micah laying alone and vulnerable in the crib, I felt all my joy and strength being torn away from me. Those harsh words cut deep like a knife, as the doctor continued to plant the seed of despair into my heart.

Boom, the cannon ball exploded and hit me smack in the face! "No!" I said in disbelief! "What are you saying, why are you thinking this?" As quickly as she dropped the bomb, she was gone. Suspended in my pain, I remember thinking that these unfamiliar thoughts could not be mine. In this darkness, I began to shut down emotionally. I was breathless and confused. The pain penetrated my being so deeply I could not process what was going on. The room was becoming smaller, and the sounds around me more distant. A silent scream rumbled deep within my belly, as my world slowly began to crumble all around me.

From the corner of my eye, I saw Henry stand up and walk over to pick up our son from the warmer. He brought him closer to me but I could not hold or touch him. I became inconsolable. An agonizing feeling of despair had taken hold of every fiber of my body. For twenty minutes, I had a perfect baby, and within an instant, my hopes and dreams were shattered.

Negative words hold powerful authority! Words can be damaging and disable the person they are directed toward. Those words the physician spoke that early morning caused me to feel cold, and dejected. I did not understand what was happening, but sensed that something was terribly wrong. Was it my fault? What had I done? I kept apologizing. Henry continued to hold Micah and whispered in my ear, "everything is going to be okay, he is beautiful and we can handle this together!" He was my rock, I could always count on him, but the despair was too overwhelming, I was drowning and did not want saving.

Meanwhile, Henry was fighting his own battle within. Repeating the words of the doctor in his mind. Henry's heart would not stop racing. "How dare that doctor say those things to my wife? She knew Kathy was a Christian. She would never have chosen to abort her child even if she had known her baby had Down syndrome." Was the doctor implying we were ignorant to conditions that define and value life? Did she think her words were comforting, and abortion was the answer?

This would be the start of countless encounters with the medical community. A community intent on creating a perfect world had likewise created an attitude of, "if it's broken, throw it away!" This philosophy has made us an insensitive people! Does life have no value? Who determines perfection? Does society really encourage us to discard imperfect babies, in hopes of creating perfect children and thus a perfect world?

I once read a beautiful story about a young sculptor named Michelangelo. He came from an impoverished family, making it impossible to purchase the marble needed for his sculpturing. One day in the quarries of Carrara in a pile of debris, this young man found a block of aged, marred and cracked marble abandoned and rejected by the other sculptors. As he studied the block of marble that stood before him, Michelangelo was able to look inside the stone to find the image he was seeking to create. He then needed only to chip away at the stone to reveal the masterpiece imprisoned within. What the world often casts aside, God redeems for His glory. What the world rejects as tragic, God intends to use to confound us.

We all strive to make sense of our world, especially when bad things happen. Where do we look for answers? Why does God allow such things to occur? What do we do when we think God has failed us? Does the world have the answers we seek when our life is falling apart all around us? Simply knowing God exists, seems not to be enough of an answer to these questions. Having a child born with an imperfect outcome pushes us to search for deeper answers hidden below the surface of this marble. When this occurs, the marble turns our hearts to marvel at what God has done.

After all the work God had done, He didn’t decide to take a few days off and return to His creation later to make some new modifications. He finished His work and was satisfied in “every way!” He is still our Creator and He is still pleased with the way He makes each one of us. No exceptions! Coming to terms with this fact, we will not have to keep asking the question “why” God allows the unexpected to happen.

The Story of Micah, journeys through the life of a boy born with Down syndrome and a life threatening heart defect. Nonetheless, he is able to bring love and hope to a world where many still believe, “If it’s broken, throw it away.” The mother, who never imagined she would be the one to birth a child with an unexpected outcome, explores the uncertainties of what lay ahead on this unfamiliar road. Micah’s body is frail from battling illness throughout the first year of life, causing hope to seem unreachable, as chances for survival wane! Despair attempts to become this mother’s companion, putting faith to the ultimate test. However, hope whispers to persevere. Would she direct her gaze toward the crashing waves, or resolve to move forward toward faith?

This tiny boy helps his mother realize, she did not have to be “the perfect mother;” she just needed to persevere, put God first, and do her best! God’s plan all along, was to dismantle expectations of human perfection, replacing it with God’s love. Through life’s battles, Micah becomes a champion, overcoming challenges of life with a steady determination, teaching us to believe the impossible. His life urges us, not to hold back, knock down restrictive walls and rise above the circumstances. Micah’s extraordinary gift to us has been a life worth living!

Kathleen, wife, mother of four and grandmother of five beautiful grandchildren, has been involved in Christian ministry nearly forty years. Author of, “The Road to Qua Qua Farm,” began a journey of applying practical biblical truths to everyday life. An A/G minister’s wife and Obstetrical nurse gives Kathleen clinical and practical knowledge of raising a child with Down syndrome. She and her husband minister in a church, a lighthouse for Cape Cod, bringing hope to those in darkness.