Ambassadors of I Am

Living Inside the Kingdom of God While Still on Earth 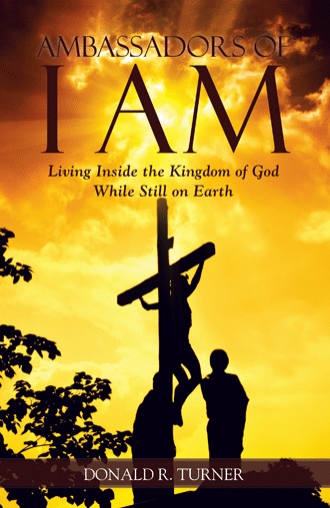 Ambassadors of I AM

Living Inside The Kingdom of God While Still On Earth

Jesus replied, very truly I tell you, no one can see

The Kingdom of God unless they are born again (from above). (John 3:3 NIV)

That Which Is Born Must Grow!

The moment we accept Jesus Christ as Lord and Savior, we become children of God, citizens of the Kingdom of God as Jesus Christ is the door into the Kingdom. We are given the “Gift of Righteousness” of Jesus Christ. Righteousness is what we need, and our righteousness could never be right enough. Actually, even our best efforts are like filthy rags before God. God knows our heart and this is what must be right in us.

Think about all the different countries, nationalities, cultures, and customs in relation to the fact that we are all now citizens of the kingdom of God on earth. God’s holy word, The Bible, is the same all over the earth, and our obligation to obey it is the same no matter where we are. The Holy Spirit, we are obligated to hear Him, to obey Him and to follow His lead no matter what country we are in. Our obligation to the King is to take up our cross daily and to follow Him no matter what the laws of the land are.

God’s kingdom on earth overlaps all of those

imaginary lines drawn all over the earth that we call “boundaries”.

To love the world is to be an enemy of Christ. Loving the world is the same as worshipping false gods. The riches of the world were offered to Jesus Christ, but He rejected them. We do not live to work thirty years, receive a gold watch and to have eight hundred plus credit scores. We seek first, the Kingdom of God and His Righteousness (right way of living), realizing that “then” all those worldly things will be added. Salvation is what we have. Jesus Christ has set us free.

Yes, We Are Now Saved. But, For What, From What?

When God chose to form the earth and make mankind in His image, He was establishing His kingdom on earth. God did not create us for us. God created us for himself. Mankind was His representatives on earth. Although earth is not heaven, the rules of God’s kingdom in heaven still apply here on earth. Think of it like when America establishes an embassy in a foreign land. The rules of America still apply, just as if the citizens there were still in America. The laws of that foreign land are not applicable to America’s citizens there.

But in the case of the kingdom, God commands us to obey the laws of that land, unless the laws of that land require us to disobey the laws of the kingdom. However, we must be prepared to accept the punishment that comes from not obeying man’s law like Daniel and the other Hebrew boys. We must not be arrogant in that situation, but always humble because God has promised to “lift up” the humble. We don’t know if God will save us from the punishment by man, but we do know that “He Is Able”. Nevertheless, we must obey God over man. America supplies the embassy with all of their needs and protects them.

Disobedience is Man’s Way of Representing Himself.

When Adam disobeyed God, sin entered into mankind. Even his seed was infected. God therefore withdrew His spirit and severed relations with mankind. God’s Kingdom was not with mankind. Mankind was driven out of the Garden of Eden into the rest of the earth and the protection, direction, and provisions of the Kingdom were no longer available to mankind. Mankind was destined to live this life without the provisions of the Kingdom and to spend eternity in hell.

It is important to know and understand that the King of the Kingdom is our brother. Having the same father makes people brothers. He has saved us and manages our inheritance for us.

Salvation is a process that has three stages. We have been saved from the penalty of sin, we are being saved from the power of sin (as often as we allow Jesus to), and we shall be saved from the presence of sin. Sin is still a very big deal, for its wages are still death.

With this Salvation comes an obligation to be about our Father’s business, which is to engage in the spiritual war to go get our brothers and sister and take them to the King and to teach those inside the kingdom to obey “The Law of The Kingdom”. The Law of The Kingdom is love. This battle is fought in the mind. For this is where God and Satan communicate with mankind. The battle is fought in the mind, but we can tell who won or lost by our actions.

The Bible is Our Only Instruction Manual; We Must Learn it and Obey it.

If my people, which are called by my name, shall humble themselves, and pray, and seek my face, and turn from their wicked ways; then will I hear from heaven, and will forgive their sin, and (God) will heal their land. (2 Chronicles 7:14)

Therefore, let us take them to the King!

God did not create us for us; God created us for Himself.

From the time we accept Christ as Lord and Savior until we physically die; what do we do? We keep the “Charge of the Lord”; that is what we do. This charge is also “The Law of the Kingdom”.

The Law of The Kingdom is Love.

God, in his Word, instructs us to use Love as our battering ram against the gates of hell; He has declared that they “shall not prevail against us”.

The Bible is our only instruction manual on how to live this life inside the Kingdom of God while still on earth. God’s people are perishing due to lack of knowledge not weakness.

It is our obligation and duty to the King, to learn what we are to do and to do it with all of our might.

This book is designed to help us to live that “Charge of The Lord”, by committing our hearts (minds) to live in obedience to “The Law of The Kingdom”, Love.

Donald states that in the Word, God says that He calls and ordains those to do His work even before He forms them in their mothers’ wombs. What can man add to or take away from that? He marvels at God’s preparation process. God’s call and preparation are his credentials.