Get Out of God’s Way

by Marcos A. Miranda 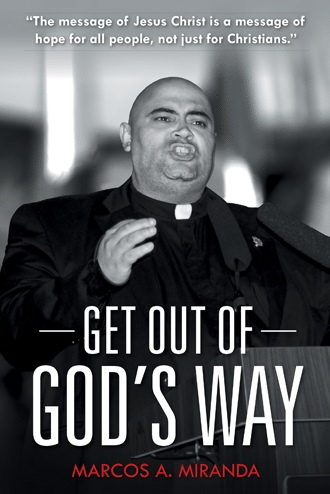 At some point in our lives, many of us say that we have faith when we really don’t, and we pretend that things are going great when they’re really not. We spend most of our time lying to ourselves—not to mention lying to everyone else. “My marriage is perfect,” we might say, when we know that that is far from true. Or, “My partner would never hurt me,” when, in fact, she makes you feel miserable all the time—or he hits you in places where it doesn’t show. Or, “I’ve got everything under control,” which may well be the biggest lie of all.

Meanwhile, God says to us, “I know the plans I have for you, plans to prosper you and not to harm you, plans to give you hope and a future” (Jeremiah 29:11).

But guess who stands in the way of God’s plans for us? We do.

In my own case, all of my life has been a battle between spirituality and humanity. As a young boy, I thought that I was supposed to be 100 percent spiritual and 0 percent human. But then one day, when I was thirteen, I had an epiphany that allowed me to see that I could embrace both my spirituality and my humanity. My spirituality, I realized, was there to help me with my humanity, since, so long as I am in this flesh, I am corrupted, a fallen man. Many people don’t want to hear that message, which is a little too real for them. They may not want to hear that message even in church, where you might think people go to hear real messages. Not nowadays, apparently.

But if God’s plans are for us to prosper, why do so many preachers insist that we are going to be harmed and not prosper? Why do they preach such an incomplete gospel? God created all of us—and by all I don’t mean only Christians. I mean that God also created the Jews, the Muslims, the Hindus, the Buddhists, the agnostics, the atheists, and everyone else. And our purpose is to love one another; that’s what God asks of us. If Jesus Himself said, “I did not come to judge the world, but to save the world” (John 12:47), how can we, His followers, judge others? If we look at Jesus’ ministry—His words and His walk—He did some wonderful things. In fact, He did so many wonderful things that if we were to write it all down, there would not be enough room on Earth for all the books that would have to be written (John 21:25). So what we read in the Bible is only a fraction of what Jesus did and said.

But consider for a moment how Jesus dealt with people—for example, how He interacted with the Samaritan woman at the well (John 4:1-42), whom I have discussed before. Jesus was a Rabbi, a Jewish teacher, and the woman was a non-Jew. Given the conventions of the day, she was not supposed to even talk to Him, or Him to her. But Jesus asked her for a drink, for the well was deep, and He had no bucket to draw up the water. At first, the woman was shocked that He even deigned to speak to her, not only as a Jew to a Samaritan, but as a man to a woman He did not know. Such things were not done at the time. But Jesus told her that if she gave Him a drink, He would in turn give her a drink of living water so that she would never thirst again. And so, she ran back to her village and brought the people out to hear this prophet who she thought might actually be the Messiah. We don’t even know this woman’s name, but theologians consider her to be the first evangelist.

Or recall Jesus’ treatment of the Centurion (Matthew 8:5-13), whom I have also discussed before. Do you know what a Centurion was, back in those days? His title, Centurion, refers to his being in charge of a hundred men. But how did one become a Centurion? He had to kill, destroy, crush, and rape. And when he could do that “well enough,” and get others to do it, he might be made a Centurion. Furthermore, all the Centurions were pagans. But when a Centurion rushes up to Jesus and implores him to help his servant, who is dying, does Jesus tell the man that he is a pagan with blood on his hands, and send him away? Does Jesus ask about the color of the servant’s skin, or the servant’s gender or sexual preferences? No. The Centurion knows that he is unworthy to have Jesus in his house, but he tells Jesus, “Just say the word, and my servant will be healed” (Matthew 8:8). Jesus is amazed by this, and tells His own followers, “I have not found anyone in Israel with such great faith” (Matthew 8:10), and He heals the servant (Matthew 89:13).

We can become so constricted by liturgical rituals that we cannot love God in our own way. When we cannot live up to the impossible standards that have been placed on us by some denomination or faith group, we may start to feel bad about ourselves, and that only takes us farther and farther away from God. When we come to church to meet with like-minded individuals in search of spiritual reinforcement or support, human rules and regulations grafted on to religion often make us feel belittled, as if we are doing everything wrong. Rather than finding absolution from our sins, we are made to feel inadequate.

The message of Jesus Christ is a message of hope and love for all people. Scripture is beautifully written, and when we delve into it deeply, when we uncover its mysteries, that leads to enlightenment. As Christians, we are called on to imitate Christ. That is why it is so important that we closely study the words and actions of Jesus Christ—everything He did, every move He made, everything He said, and how He delivered it. Jesus only rarely became angry, but He was never hateful. That is God’s way. We will never be Christ, but we should try to imitate Him as closely as possible. However, when it comes to spirituality, we are our own worst enemies, constantly getting in God’s way. What we need to do more than anything else is to get out of God’s way.

Reverend Marcos A. Miranda is the Founder and President of New York State Chaplain Task Force—an interfaith organization comprised of over three thousand crisis spiritual care providers. He is also the Senior Pastor at Action In Christ International Church, in Brooklyn, New York, and the Overseer of more than five hundred ministers at Christian Clergy International—an organization that provides an enrichment forum for interdenominational Christian clergy, so that attention can be brought to issues such as the persecution in foreign nations of Christians and other minority faith groups, and the state of the disenfranchised poor Christian churches worldwide.

Rev. Miranda’s dedication to the betterment of humankind has led him to create and participate in organizations that exemplify love, peace, and compassion. As a member of the Association of Professional Chaplains, he currently serves as a hospice chaplain at Calvary Hospital in the Bronx, as well as a trauma chaplain for the Metropolitan Transit Authority of New York City. He is the current President of Lodge 777 of the New York State Fraternal Order of Police, the Assistant Dean at the New York Divinity School, and the Chief of Operations for the NYPD 90th Precinct Clergy Council.

Rev. Miranda was one of the first clergy to be hand-picked to participate in New York City Ceasefire—a program focused on reducing violence by communicating clearly and directly with gangs, crews, and drug sets through call-ins and custom notifications. Rev. Miranda has also been a guest lecturer at St. John’s University, Fordham University, The New School, The Harlem Museum, El Museo del Barrio, Union Theological Seminary, and other prominent institutions.