"The Gates of Hell" 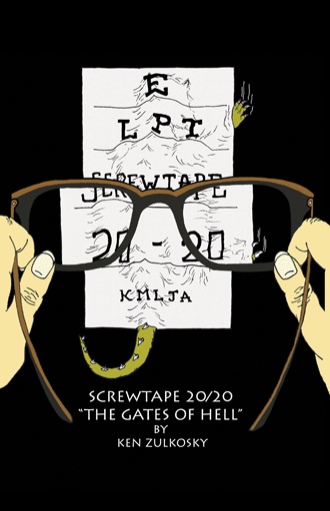 Simon Abramson squinted into the bright Middle Eastern sun. He was wondering why he had been summoned to this barren place at this unexpected time. Out of the blue, he had received an express letter from an old army companion who had continued in Israeli intelligence when he, Simon, had moved on to civilian work in archeology so many years ago. And why on earth had they sent a transport to pick him up to bring him here--to the lowest part of the Earth.

It was late April, and the heat was already showing its formidable side. It was like that down here at the southern end of the Dead Sea. Although he had traveled in this area on occasion, he had never spent any time here in what he did best, archeology-site digging. And why should he have come here digging, unless he was searching for the now-lost Sodom and Gomorrah. For it seemed that not much throughout the history of mankind had occurred in this God forsaken land, or at least nothing known to the history books.

As he stepped out of the army personnel carrier, he instinctively reached for his sunglasses in his top left pocket. He was wishing that he had had the foresight to carry a bottle of water. Glancing to his left, he saw what he presumed was Mount Sodom, and to his right, the vast arid desert that surrounded the Dead Sea. Like all Israelis, he knew his history; but unlike most, he knew details. He had done his undergraduate work at the Institute of Archaeology at the Hebrew University in Jerusalem and graduate work at Stanford University in the United States. That was twenty four years ago. Since then, he had been one of the lead archeologists on the City of David project, which undertook the excavating of the ancient king’s city underneath the present day Jerusalem. While there, he and others had mapped out Hezekiah’s tunnel and Warren’s shaft and made many amazing discoveries corroborating Biblical history.

His biggest find was an accident of sorts. While taking a breather from the tunnels near the Gihon spring, he had heard something that caught his attention. It wasn’t anything out of the ordinary, just a backhoe or caterpillar that was digging a short ways south of his location. But something about the sound of the scraping of the blade made him perk up. Just out of sight, but within the smell of the diesel engine, there was a steel-on-rock war being waged. It sounded like the rock was winning, but the steel and driver had other plans. Simon shrugged his shoulders and thought to himself that it was worth investigating. After crossing to the sidewalk and moving downhill, he had spied the machine and driver. It was about then that the hair on the back of his neck stood up. Something wasn’t right. There shouldn’t be a flat stone in that area, perhaps bedrock, but not a flat stone. He had walked over, just out of the reach of the engaged claw of the machine and scanned the area. It was then that he saw it, or more accurately, he saw them--stairs. It didn’t take long for alarms to go off in his brain and he had practically jumped up to the cab of the earthen machine while screaming for the operator of the vehicle to stop digging.

That had been several years back. After careful excavation and hard work, the Pool of Siloam had emerged from the earth for the first time in many centuries. It was the place where Jewish pilgrims had come first, on their way into the city, to ceremonially cleanse themselves from their travels before they made their way uphill to the Temple. It was now a tourist site and visited by thousands of modern day pilgrims. Simon’s discovery had propelled his name to the top of many archeological digests and even to the New York Times. His work on the City of David hadn’t hurt either. But now, here he stood in a barren desert, wondering why he had been summoned in the first place.

He was thinking these things over when....

Why is this world so broken and lost? Why does wrong often seem right? What are the origins of evil, and how do they intersect our day-to-day lives? This book starts at the gates of hell, as recorded in Matthew 16:18, and works its way into our living rooms.

Ken Zulkosky has been working with teens and young adults as well as their families, both inside and outside the church, for twenty nine years. His book will inspire and challenge you in your day-to-day battle against unseen forces in the heavenly realms.