One Woman's Journey of Falling into Embarrassing and Hilarious Moments. 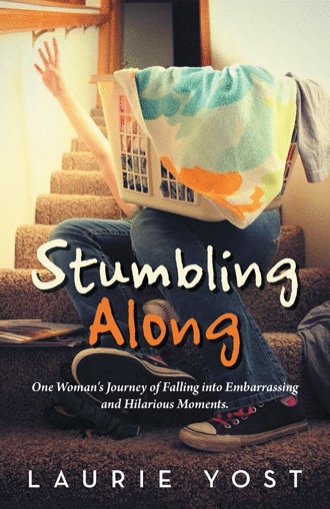 There is nothing I like more about living in Mexico than meeting new people and visiting with them. I love trying to build relationships and make conversations with others by using what I like to call “Laurie’s Spanish.” The key word would surely be “trying,” because at times, my limited knowledge of the Spanish language keeps me from truly being able to get my point across. Looking back at the many times I have spoken to people, I have to be honest and say that my words have maybe even been a little dangerous.

One May afternoon in 2005, about a year before we were assigned as full-time missionaries to Mexico, I was visiting a friend in her home on the southern Arizona border. We went to a small house across the border into Mexico to do a Bible study. Thankfully, my friend spoke in fluent, wonderful-sounding Spanish, while my Spanish was just what I had learned in high school.

The family invited us into their home so that we could share more about Jesus with them. I was excited to be there. I sat down next to the grandmother and a little girl who was about three years old. Here’s a language tip: when you don’t know a language very well, little kids are the ones who are the most forgiving. I focused my attention on visiting with the little girl because I thought I wouldn’t have to say much; smiling and laughing with her would keep her busy.

This sweet little girl was holding a cute stuffed bunny rabbit. I thought this might be a safe conversation point, where I could insert a few of the Spanish words I knew. I began to make faces at her and her stuffed rabbit and to pet the rabbit. I gently took the rabbit from her, hugged it tightly, and said, “I love your cuchillo. I love your cuchillo so much. Let’s hug and pet and love on your cuchillo.”

As I was speaking, I could see the grandmother out of the corner of my eye looking strangely at me. This look was really nothing new to me, whether in the United States or another country, so I proceeded to make a big deal about this little girl’s cuchillo and how lucky she was to have it to hug and love. The little girl enjoyed my antics, and because she did, I just kept going with and overdramatizing them.

When the grandmother could take it no longer, she pointed to the kitchen and for the little girl to go there. She said something to her that I didn’t understand, so I just smiled. A few seconds later, this sweet little three-year-old girl came staggering in toward her grandma with a butcher knife. Yes, a butcher knife. I started to wonder what in the world was going on in this place and why this little girl was holding on to a butcher knife. When she finally got back to us (thankfully, without stabbing anyone), the grandma looked at me. She pointed to the butcher knife and said “cuchillo” and then pointed at the bunny rabbit and said “conejo.” Oh, I was using the wrong word for bunny rabbit.

I then began to think about how I must have sounded to the grandmother and the little girl (who was probably still learning words herself). Let’s hug and love your butcher knife. Aren’t you so glad that you have a butcher knife to play with? Let’s love on your butcher knife with everything in us.

I learned a lesson that day. I learned how to say bunny rabbit in Spanish. I will have that word carved into my mind forever. I will also have the picture of a toddler, holding a big knife, staggering to her grandmother.

About a year after this experience, we were living in Mexico full time. One would think that I would never forget the word in Spanish for bunny rabbit (conejo), but that wasn’t the case. My sister-in-law, Kristy, was visiting our new home in Mexico. I was so excited to introduce her to my friends at the kids’ school. Each day, I went to the school to pick them up, so I took her with me one day. When we were allowed to enter the gates to get them (security is very high at the schools), we were standing in the courtyard, waiting for classes to be released. I recognized a few people who walked by, and I said hola. Finally, all three of my kids had gathered around, very happy to see Aunt Kristy.

Of course, when we would come to the school, people would take note because we were the only Americans who attended. On this particular day, there was a new American, and so a few of the teachers and the administrator stood around with us. I was very pleased to introduce Kristy to everyone. With a confidence in my voice and proudness in my heart to have a relative with me, I said in my very best Spanish, “I would like to introduce you to my conejo, Kristy.”

Any time you introduce someone and there is a pause and strange looks, it’s pretty clear something was not said correctly. Finally, my friend, Martina (the kids’ very kind and helpful English teacher), told me I had just introduced them to my bunny rabbit, Kristy. I was horrified, as I wanted to present to the school a sense of intelligence on my part. (Fat chance of it happening after that remark.) Everyone chuckled, and poor Kristy, having no idea what was going on, just pleasantly said “hola.” I just wanted to hide in a hole right there, in the clay dirt of the desert. It was then I learned the word for sister-in-law. It’s not what I said, obviously. You would think after my afternoon lesson with bunny rabbit and butcher knife that I would have at least not chosen that word. If you ever need to know the word for sister-in-law, it’s cuñada, not conejo.

It’s funny that I said all of those words with such confidence, but I still had them wrong. It didn’t matter if I said them louder or with more feeling; they were just plain wrong. Had I studied Spanish vocabulary more, I would have known this. Had I listened to the two years of Spanish I took in high school, I may have saved myself some trouble.

I think we can do the same thing in our lives when it has to do with God. We can know a few of the right Christian things to say, and we say them with confidence. But that doesn’t really make us a Christ follower, just like my knowing a few Spanish words didn’t make me a Spanish speaker. I want to encourage you to begin to have a relationship with God and know His Word fully so that you can know the way you’re living is the right way.

Read Colossians 4:2–6 (NIV); write down what you read about opportunities. “Devote yourselves to prayer, being watchful and thankful. And pray for us, too, that God may open a door for our message, so that we may proclaim the mystery of Christ, for which I am in chains. Pray that I may proclaim it clearly, as I should. Be wise in the way you act toward outsiders; make the most of every opportunity. Let your conversation be always full of grace, seasoned with salt, so that you may know how to answer everyone.”

How can we make the most of every opportunity each day?

Sometimes we go into situations with such good intentions, as in the case in the story above, and something doesn’t go quite right.

Do you think God still can still use those situations to point people toward Himself?

Though I fumbled the language, how might the people in the house I visited have seen Jesus in me?

How have people seen Jesus in you today?

Have you ever felt that your life was one big episode of Candid Camera? Having found herself in many “Candid Camera” style situations, Laurie relays these funny stories in quick, easy-to-read, short chapters about her real life “moments.”

Stumbling Along will make you laugh until you cry, squirm with embarrassment, or cringe from the awkwardness of the circumstances in which Laurie finds herself. Whether it’s being stopped by the Mexican police or unknowingly speaking risqué words in Spanish to a Mexican pastor, you are bound to crack a smile at her quick-witted humor.

Laurie will take the themes from her anecdotes and biblically challenge us to practical, life applications. We can have a sense of humor and still live a genuine Christian life. Laurie will give you permission to laugh. If you’ve been void of laughter in your life then today is the day to begin laughing again.

Laurie Yost has always looked at life from the humorous side. Appropriately, when she was in college she was voted class clown. Laurie graduated from Spring Arbor University and taught secondary education for three years before becoming a stay-at-home mom. As a pastor’s wife and a missionary, she felt called to minister to women, and this passion pushed her to start two mom’s groups, mentor women and pastor’s wives, and work with MOPS International. She recently transitioned from the mission field in Mexico to minister in Northern Lower Michigan.

She has been married to her prince charming for twenty-five years and has three beautiful children and a daughter-in-law. Laurie’s writing and speaking are about the silly and oftentimes unbelievable, real-life situations from living in the United States and Latin America. She seeks as her life goal to live a life of love, humor, and intention with a heart to serve.