Founding Fathers: Atheists? Deists? Are You Sure? 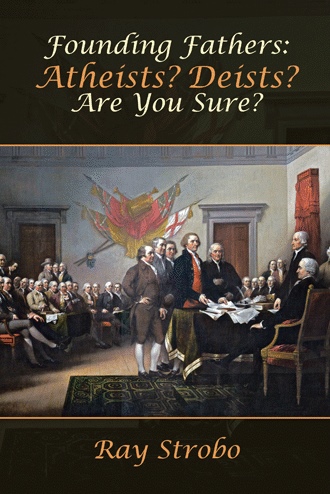 This project started several years ago with a question in my mind, "Were the Founding Fathers of the United States really deists and atheists as many Internet sites indicate?" My honest answer at the time was, "I do not think so, but I do not know." I did not have enough information to offer an accurate, defensible answer to that question. I began to search for and accumulate data on the subject so that I could.

To make the data more manageable, I narrowed the list of 250 or so "Founding Fathers" down to the men who signed the Declaration of Independence. These 56 men are representative of the total classification of Founding Fathers in education, age, public service commitment, socioeconomic background, family status, and -- religion.

The historical record is pretty clear on the religious beliefs of 46 of the 56 Signers. None of the hundreds of biographies, magazine articles, wills, obituaries, eulogies, research books, and other writings I reviewed characterized any of those 46 men as being an atheist.

Nor did any of those biographies, magazine articles, wills, obituaries, eulogies, research books make a strong, defensible case for the deism of any of the Signers, with the possible exception of Benjamin Franklin. In fact, Franklin aside, in each instance, the data I examined pointed to the judgment that these men were NOT deists.

For the all-encompassing statement that "The Founding Fathers were deists and atheists" to be validated by the historical record, ALL the Signers of the DOI would have to have been classified as either a deist or an atheist. The data clearly show that not to have been the case. Out of 46 of the 56 Signers about whom we have definitive religious belief information, there were no atheists and only one deist.

The historical record gave me more than just an answer to my question, though. It transformed these heroes of the United States' founding from names and biographic details to real flesh-and-blood people, people with fears and hopes and successes and failures, people with good days and bad days--real people.

As I went from source to source, the accumulated data on these men began to create a persona, a three-dimensional incarnation for each man. No longer was Caesar Rodney just a man who was born in 1728 and died in 1784 at age 56. But, in my mind's eye, I saw Rodney on his horse on the last leg of his rush to get to Philadelphia, wet, mud-spattered, and sick, and determined to make his vote for Independence count.

No longer was Abraham Clark just a lawyer from New Jersey who, once upon a time, happened to sign the DOI. I now imagined Clark and his wife, Sarah, sitting around their kitchen table asking, "What's happening to our boys? What are the British doing to them?"

"Honest" John Hart became more than just a moral, fair man who was trusted by his neighbors to settle disputes. The bland factual statement that Hart had to abandon his farm and family to avoid capture by the British took on a high-definition reality when I imagined a 60-year old man struggling through the woods above his home in the dead-of-night, scrambling for his life. "Where am I to sleep tonight? What am I to eat? What's to become of my children?"

The historical record tells us dispassionately that Thomas Stone died in 1787 leaving behind a 12-year old son. My imagination shares the agony of Stone as he laments the loss of his beloved wife, as he struggles with what parting words of advice and encouragement he can give his boy, and as he contemplates his approaching death. I try to put myself into Stone's frame of mind, but cannot.

Henry Knox dragging cannons through the wilderness from Canada to Boston. Washington watching his troops retreat in panic in the face of the enemy's charge. A band of civilians and militia defeating a well-trained, well-equipped professional army at King's Mountain and changing the course of the War and their nation and history. Betsy Ross stitching together a flag. Charles Thomson calling the roll for the final vote on the Declaration of Independence of the United States on July 4. General Benjamin Lincoln accepting Cornwallis' sword at the surrender of the British army at Yorktown.

What’s this book about? It's about TRUTH. According to the Internet and the media, the Founding Fathers were deists and atheists. That is NOT TRUE. The Historical Record is clear: The Signers of the Declaration of Independence, an exemplar of the Founding Fathers, were, for the most part, men of religious faith. The reader is directed to hundreds of historical references, many accessible online, which tell us the TRUTH that none of the Signers of the Declaration were publicly professing atheists and only a handful of them were ever publicly categorized as deists in their day. (And most of those characterizations were NOT TRUE.)

The author spent years researching this subject and gathering data about the Signers from biographies, wills, magazine articles, newspaper articles, personal correspondence, speeches, legislation, first-hand testimonials, obituaries, eulogies, tombstone engravings, and character studies. The overall conclusion from these sources is inescapable: Religion played a significant role in the private and public lives of most of these patriots. (The religion of their day in the British North American colonies was Christianity.)

Meet these Signers for yourself, all 56 of them. See them as real people, "ordinary" men in many cases, called on to do extraordinary things in the face of overwhelming odds. Hear them give credit to the "interposition of God" as they overcame those odds. See TRUTH through their eyes and through the eyes of people who knew them or researched them.

Ray Strobo combined his love of American History with his prowess as a detailed researcher into a unique study of the religiosity of the Founding Fathers of the United States, specifically the 56 men who signed the Declaration of Independence. His years of research and study on this subject have produced some surprising insights into the religious beliefs of these patriots who "turned the world upside down".