Unraveling the Family History of Jesus

A History of the Extended Family of Jesus from 100 BC through AD 100 and the Influence They Had on Him, on the Formation of Christianity, and on the History of Judea 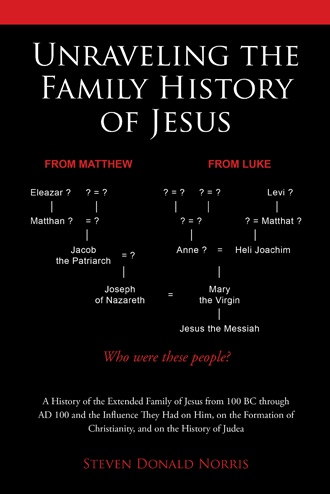 In this chapter the genealogy of Jesus has finally been exposed. Beginning with the simple theory that “if” Jesus was really a claimant to the throne of Judea and the High Priesthood, then it should have been evident to those who were living in His time, I proceeded backward in an attempt to verify this simple reality. If Jesus actually had a legitimate claim to be called the King of the Jews (or King of Judea) and High Priest, then there certainly should be a way to prove this.

Beginning with the genealogy as presented in the Gospel of Luke, which is clearly more complete than that of Matthew’s gospel, I sought to find a reasonable explanation for the lists of names found there (Mary, of Heli, of Matthat, of Levi, of Melchi, of Jannai, of Joseph, of Mattathias). It seemed evident to me that these were real people and that Luke was not just inventing names to get back to King David. I began to unravel the genealogy of Jesus by questioning just exactly who these ancestors could have been in history. Moving sequentially one generation back at a time, both on the line of Mary the Virgin and on the line of Joseph of Nazareth, I began to put the pieces of the puzzle together.

A major breakthrough occurred to me when I realized that both Luke and Matthew had moved backward through women to get to the next generation back. In other words, I was able to determine that it was through an in-law in some cases that I needed to find the next ancestor.

Eventually I was able to “flesh out” the full genealogy of Jesus, showing that, indeed, He was descended from both the Kings of Judea and the High Priests of Jerusalem. Specific personalities were finally identified to make the lists of names in the genealogy of Luke, in particular, but also in the genealogy of Matthew, become real people.

After nearly 2000 years, both the genealogy of Matthew and that of Luke can be shown to be accurate and to have real, identifiable High Priests and Kings of Judea as ancestors of Jesus. What we have learned about these people, and there is still more to report, will be shown to have had a significant affect on the upbringing, knowledge, and final disposition of views held by Jesus.

One more thing of importance must be noted here. In this process I realized that the Hasmonean royal palace in Jerusalem was the locus of many of the main characters in the ancestry of Jesus. Through the dowager Matriarch Queen, Alexandra II (Esther), whom I had identified in the previous chapter as the close friend of Cleopatra VII, I was able to piece together that her entire extended family was living with her in the royal palace right down to 37 BC, when Herod the Great usurped the throne of Judea and, as I will show shortly, even beyond until her own death 9 years later, since Herod elected to build his own palace rather than live in the Hasmonean’s home.

Both Heli Joachim and his wife Anne, the father and mother of Mary the Virgin, grew up together in the royal palace, related by blood, but also brought together through a strange “coincidence” of events. Their parents, Matthat for Heli Joachim and Matthan for Anne, also lived in the same royal palace, or close by (recall that the Zadokites were granted a huge plot of land at the base of the Temple Mount). Matthat was the last King of Judea and High Priest while Matthan was a member of the Sanhedrin court. Matthan’s mother, however, was Salome Maccabeus, the daughter of Alexander Jannaeus and Alexandra Salome. Therefore it is highly likely that when she married Eleazar ben Pacora the Zadokite (Matthan’s father), this couple also would have lived either in the royal palace (she was, after all, a Judean Princess), or have a home on the Zadokite land at the base of the Temple Mount. Therefore, her grandchildren, the children of Matthan, about whom I will have much more to add shortly, all lived in the royal palace area together. In other words, Heli Joachim grew up with his future wife Anne bint Matthan. It was not until the death of the matriarch, Alexandra II (Esther of Jerusalem), by execution on the order of Herod the Great in 28 BC, after the death of her friend and protector, Cleopatra VII, that the remaining members of the family finally had to separate for their own protection (some had already reached adulthood and had moved out). As we move forward I will show how Herod the Great systematically sought out each of these persons and had them executed in his maniacal attempt to take complete control of the throne of Judea at the expense of the elimination of the Hasmoneans.

Before I move into that period, however, I want to set the stage by discussing the Hasmoneans as Kings of Judea and High Priests of Jerusalem, two powerful positions held by this family for over 100 years, only to be snuffed out by Herod the Great just before the birth of Jesus. These people were all direct ancestors of Jesus.

Unraveling the Family History of Jesus approaches Jesus as an historical figure and sheds light on the details of the settings, the circumstances, and the context in which His family lived. Steven Donald Norris—drawing upon a wide array of sources—brings to this work an historian’s sensibility of the broad sweep of events and a genealogist’s eye for capturing the fine nuances that make a family’s own story unique.

Typical theological treatments of Jesus tend to regard Him as the Messiah because the New Testament identifies Him as a “son of David.” Unraveling the Family History of Jesus digs into the background and lineage of Jesus and, by uncovering the setting in life—Sitz im Leben—of His family, shows precisely how Jesus was a son of David and how He—by right—ought to be acclaimed “King of the Jews.” In addition, this work documents the connections tying Jesus’s extended family to several historical figures who played prominent roles in the destruction of Jerusalem.

Norris’ work provides fresh insights that arise from meticulous reexaminations of existing historical sources. It traces the family ties binding Jesus’s forebears and His extended family to one another and to Jesus Himself and tells how this family’s influence changed the course of human history.

Steven Donald Norris studied graduate-level theology at The School of Theology, Claremont, California. Nearing retirement after a career in the secular market, he has combined his avocational interest in genealogy with his research into the history of the family of Jesus. He lives in the mountains above San Bernardino, California.