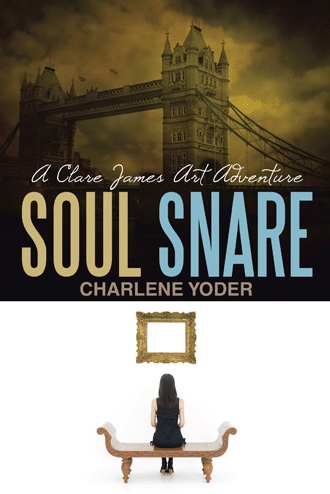 Before it could reach my eyes, the smile had died on my lips, leaving a bad taste in my mouth.

Our group sprawled around in various positions of repose on the decaying pews in the abandoned cathedral. They had gotten quiet, looking to me for a reaction, so I forced my constricted throat to spit out a decidedly American response.

Clare James never intended to do more than visit museums and sketch the work of centuries of artists who had come before her when she signed up for a study abroad program in London, England.

However, after her travel companion’s belongings are nearly blown up under suspicious circumstances, she arrives at her flat where her new roommate bullies her at knifepoint. Exhausted and scared, she is quickly disillusioned about her reasons for coming overseas.

And then Lizbeth, a friend from the United States whose mother is British, shows up with a mysterious tale of a stolen family heirloom––a painting so small it could be hidden in the sole of a shoe. This painting could prove the existence of a lost royal heir and close the doors of one of London’s largest churches forever.

Intrigued like a modern Nancy Drew, she goes from decoding messages by candlelight in the dome of St. Paul’s cathedral to avoiding capture by doodling caricatures of guests amidst the glitz of a grand country ball.

In her quest to find the truth, can Clare stay connected to the unique voice God has given her to share her testimony with the other students in the program and solve the meaning of the miniature painting’s existence without compromising her beliefs?

Charlene Yoder studied abroad while earning her Graphic Design BFA from Millikin University. She holds an art teacher’s license for all grades. She does murals and teaches private art lessons in Sarasota, Florida where she lives with her husband and daughter. Yoder won first place in the 2014 Aspiring Authors Writing Contest for Soul Snare, her first novel.