Defining Life by Your Dreams Not Difficulties 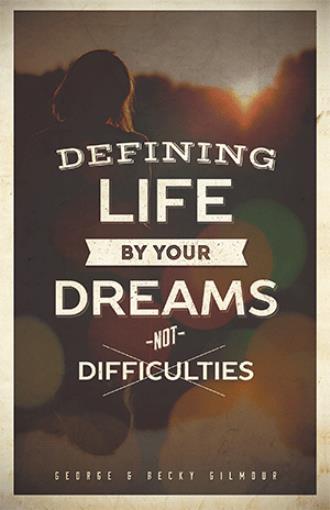 God did not leave us to our imaginations. Through His Word, He supplied us with principles and illustrations through people who both followed or disobeyed. If you are like me, you have spent a lot of your life wishing things would change and lamenting over things that haven’t. We have all heard the regrettable epitaph, “Woulda, shoulda, coulda.” I once asked a friend if he was happy. He paused for a moment and then said, “I was, just before you asked me that.”

Have you ever wondered why the car’s rearview mirror is so much smaller than the windshield? I believe it is because we are supposed to spend the bulk of our time looking ahead, not behind. The title of this book is a sharp comparison between the two mindsets with which we all live. One looks forward; the other looks behind. One holds hope; the other offers regret. One pursues promises; the other clutches problems. One brings us closer to solutions; the other leads us away from them.

David said in Psalm 27:13 and 14, “I would have despaired (given up hope); unless I had believed that I would see the goodness of the LORD in the land of the living. Wait for the LORD; Be strong and let your heart take courage; Yes, wait for the LORD” (NASB).

In other words, hope in the Lord, not in your circumstances. David believed God was the supplier of goodness, but he knew God doesn’t always supply what we think is good, or work according to our timetable. David was anointed to be King of Israel when he was a teenager, but he was not able to take the throne until he was in his thirties. In the meantime, he spent most of those in-between years running for his life.

But David was confident in God’s person and promises. He confirms that thought in Psalm 56:9. “When I cry out to You, Then my enemies will turn back; this I know, because God is for me.” What a statement—to know that God is for us! Well, if you know the Lord as your Savior, then you can say that too. But as we read in Psalm 27, it takes patience to see God’s will unfold.

When we sit in the audience at the beginning of a play, we are privy only to what the opening scene reveals, but the stage director can see all the various activity going on behind the scenes. God is like that director. He not only knows what is going on behind the scenes, but He is also orchestrating them. David had learned to be confident in God’s supply when his own resources ran out. Without that confidence in God’s direction, he would have given up long before feeling the throne at his back.

All of us have unpleasant things attached to our pasts, but if we aren’t careful, we can begin to live there. Many of us foster a slavery mentality by allowing ourselves to be chained to past difficulties and mistakes. We get stuck or stifled because our difficulties are more prominent in our minds than our dreams. No one benefits from the constant rehearsal of past difficulties. Doing so only promotes bitterness, confusion, and anger, and if you are tangled up in past issues, you won’t have the creativity needed for future dreams.

God will not fix our past, but He does promise us a future hope (Jeremiah 29:11). He is calling us to look forward instead of behind; Philippians 3:13–14 says, “I have not achieved it, but I focus on this one thing: forgetting the past and looking forward to what lies ahead. I press on to reach the end of the race and receive the heavenly prize for which God, through Christ Jesus, is calling us.”

When the chains of the past are broken, we are free to pursue our future and to look forward to what God has for us. It is our desire that the principles and stories revealed in this book will help you move from your past to your future and from your difficulties to your dreams.

Your life can be determined by your dreams or difficulties—your choice. Most people put up with their difficulties because they are more real than their dreams or the pain of the status quo is less than the pain that accompanies change. But, you do not have to be the victim of your circumstances! When the chains of the past are broken, we are free to pursue our future and to look forward to what God has for us. It is our desire that the principles and stories revealed in this book will help you move from your past to your future and from your difficulties to your dreams.

George and Becky Gilmour have been teaching and ministering in local churches since they were teenagers. They met in Bible college, married, and have been partners in ministry for more than forty years. George earned a degree in Bible and history from Pacific Coast Baptist Bible College and is currently credentialed for pastoral ministry through International Ministerial Fellowship. George and Becky have worked in local churches in a variety of capacities, from teens to senior adults. The Gilmours experienced a parent’s worst nightmare in 1981 when their four-year-old daughter was killed in a traffic accident. Through this tragedy, they experienced God’s overwhelming love and learned first hand the real meaning of hope. For the past thirty years, they have been dispensing hope through their seminar, “Navigating through the Storms of Life,”Drive Time Inspiration CD, and one-on-one counseling. They currently live in Burnsville, Minnesota. They have two married sons: Chad and his wife, Danielle; and Jason and his wife, Joanna, who have four beautiful daughters.