In a triangle of Western influence, communism and legends 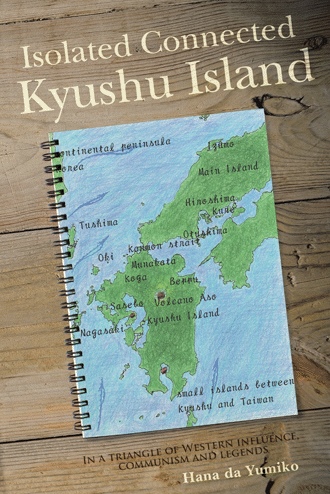 An air-raid siren wailed again in the morning. A boy dashed out of a house.

“Hisaharu! Back! To the cave!” His mother shouted.

“This time I will watch them!” He didn’t look back.

“It’s alright,” his father said. “The target is Yahata, not this valley. Yone, daughters, let’s go to the cave just in case.”

“I don’t wanna lose another son.” Yone began to cry.

“I am a ninja!” Through trees and bushes, the boy heard the sound of fighters and bombers as usual. He looked at another mountain on the other side of valley, where an antiaircraft gun was in position. Will it work this time?

The noise got louder and louder. Then he saw a big group of F6Fs and ten B-29s through branches and thick leaves. They are the enemy! All he knew had been their noise. They came from the southeast as usual. This is the enemy my brother died fighting against. I am watching them!

He climbed a tree and watched the antiaircraft gun. It began to fire as usual. American pilots knew the height its shells would reach. The Americans had no obstacle between them and their target, Yahata, the iron city.

The ten-year-old boy jumped to the ground and dashed again. Are our armaments really miserable? Last week, a typhoon made an American fighter crash. Are typhoons our only defense? What happened to the pilot?

At the top of the mountain was a ruin from the samurai era, an ancient castle he climbed up to. Far away beyond the mountain ranges, he saw Yahata being bombed by innumerable planes. Are we losing? Am I gonna get killed too?

Two airplanes with the sun on their bodies came from the east, chasing the B-29s. One of them caught Hisaharu’s eyes. It’s plunging! His heart pounded. “Why? Ah, no! It’s falling in a spiral!” he shouted. “Why? We’re losing! Adults say enemies will land soon. Can I be ready for death next week? Tomorrow?”

The education in those years told pupils to die, not to surrender. A man went to battle and died with honor. No! I will run and hide. Hiding doesn’t mean I’m a coward. I’m brave! Oh yes! He found a good reason to persuade himself. I’m brave enough to search for the enemy in the crashed fighter. There must be a pilot. There must be a body.

Barefooted, the boy rushed back into the thick underbrush. He was one of the typical village boys who didn’t like zori, straw sandals. Cuts and scars were a boy’s pride. Village boys’ soles were hard as bamboo. Their feet weren’t for walking, only running. Walking was done balancing on their hands with their feet in the air.

Deep in the forest, climbing up a cliff, he smelled something wrong. This is it. He opened his nostrils as wide as he could. Closing his eyes to concentrate, he traced the smell and opened his eyes when the smell got stronger. He walked like a ninja for a while and found a plane in the treetops.

Wow! Is this … is this a plane?’ He had not seen such a big piece of metal before. This heavy material flies!

He saw a head leaning a little to the right. Is he dead? He looked around and decided to climb a tree near the combat plane to see the pilot’s head. He held the boughs and put his soles on the trunk silently. Even if the pilot is alive, he can’t catch me here.

It was burning hot above the forest without the shade of the trees. The pilot’s helmet had slipped off. The color of his hair scared the boy. It was like that of an oni, an ogre in tales. No way. He must be old. No, it’s yellow, not white. I’ve heard a terrible experience sometimes makes hair colorless. So this is colorless hair. The curious boy gazed at the stranger. This pilot must have felt terrible fear. Hisaharu moved to another tree to look at the pilot’s face. The pilot’s face was very different. Is this difference the reason we have war? No way. Did my brother Ichiro also feel fear like he did?

It was hard to imagine Ichiro’s hair had turned out to be this color. Why should his nose be big like this? Do Americans need more air? Hisaharu breathed the air to make his nostrils as big as he could. More than this? The pilot’s eyes were closed. Will he open his eyes?

Hiding himself from the man, Hisaharu crawled to the next tree, which was supporting a wing. The boy pushed the wing; the pilot groaned. He lives! He lives! He’s gonna kill me! The boy’s body was frozen for what seemed like hours. The sun was burning above. The American didn’t groan anymore. He’s gonna die. Ah, he’s gonna die. He looks as young as Brother Ichiro. “Mister, I’m gonna bring you water.”

Hisaharu ran through the mountains. Jumping over roots from the ground, he checked strong vines to hold one after the other. He took big bamboo bottles and poured water from a well. All the metal cups had been taken to make planes. Hisaharu had crushed his lunchbox with a stone in his schoolyard. The order had made him very sad.

Uncle Enemy, all I have are bamboo bottles, the boy told himself. He plucked cucumbers and eggplants. There he saw dojou, small freshwater fish, and mud snails, which he put in the water to get rid of the mud. They’re for our meal tonight. I’ll bring my portion for ya, Pilot-san.

When he got back to the aircraft, everything was the same. The boy waited to see if the pilot would groan again. The American’s silence froze the summer forest, the sound of the boiling sun, glittering light, and the noise of semi, cicadas. Hisaharu pushed the wing.

Isolated Connected Kyushu Island weaves together the history of the people of Kyushu, Japan’s third largest island, and the stories that author Hana da Yumiko learned from her elders while she was a little girl. Spanning the years from the end of World War II to the early years of the twenty-first century, Isolated Connected Kyushu Island tells a story of transitions from the closing of the age of the samurai, to the rise of militarism, and finally to the coming and flourishing of democracy.

The family’s story illustrates how the land’s Hiding Christians kept their faith in secret, how women worked on their own without the support of men to encourage social change, how the ebbs and flows of many countries’ histories combined to influence the story of this land, and how a missionary and a local belief in a savior influenced religious life.

If you hunger to hear a story of universally human motives, joys, and fears told about a family living in a remote and unfamiliar land, then this book will satisfy that hunger with an account that both educates and inspires

Hana da Yumiko, born into a poor, rural family, grew up hearing her family’s stories. Taking that legacy for granted, she believed she could cultivate her dreams, bringing them to fruition by obtaining an education. This book forms her grateful homage to the legacy of freedom she inherited.