A Life That Sings

Finding Your Song In The Midst of Brokenness 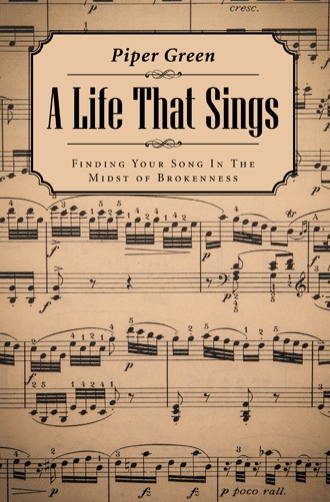 The Master is at Simon’s house I overheard them say,

My heart leaps within me; I must find a way.

All I own is this alabaster vial;

If I touch Him surely I will defile.

I hear their growls and feel their scorn, I am filled with fear,

Their mean, cold faces are clouded by my tears.

I wipe my eyes and see Him reclining at the table,

I’ve got to touch Him, I hope that I am able.

I feel my heart pounding; it is beating very fast;

His eyes catch mine and all things are in the past,

I see such love and grace flowing from His eyes,

Like a breath of fresh air, they are my demise.

I bow down and pour this perfume on His feet,

The fragrance fills the room, the aroma is sweet.

Nothing seems worthy to pour on these precious feet.

Grace He gives me, all my sins are forgiven.

I have not received grace from the Sanhedrin.

I cling to Him for my life, I have given Him my heart,

I will forever worship Him so He will to me impart,

Now one of the Pharisees was requesting Him to dine with him, and He entered the Pharisee’s house and reclined at the table. And there was a woman in the city who was a sinner; and when she learned that He was reclining at the table in the Pharisee’s house, she brought an alabaster vial of perfume, and standing behind Him at His feet, weeping, she began to wet His feet with her tears, and kept wiping them with the hair of her head, and kissing His feet and anointing them with the perfume. Now when the Pharisee who had invited Him saw this, he said to himself, “If this man were a prophet He would know who and what sort of person this woman is who is touching Him, that she is a sinner.”

And Jesus answered him, “Simon, I have something to say to you.” And he replied, “Say it, Teacher.”  “A moneylender had two debtors: one owed five hundred denarii, and the other fifty.  When they were unable to repay, he graciously forgave them both. So which of them will love him more?” Simon answered and said, “I suppose the one whom he forgave more.” And He said to him, “You have judged correctly.” Turning toward the woman, He said to Simon, “Do you see this woman? I entered your house; you gave Me no water for My feet, but she has wet My feet with her tears and wiped them with her hair. You gave Me no kiss; but she, since the time I came in, has not ceased to kiss My feet. You did not anoint My head with oil, but she anointed My feet with perfume. For this reason I say to you, her sins, which are many, have been forgiven, for she loved much; but he who is forgiven little, loves little.” Then He said to her, “Your sins have been forgiven.” Those who were reclining at the table with Him began to say to themselves, “Who is this man who even forgives sins?” And He said to the woman, “Your faith has saved you; go in peace” (Luke 7: 36-50 NASB).

She walks the road toward Simon’s house, with an alabaster vial in her trembling hands. Her thoughts are scrambled; she is nervous and scared. The sound of her footsteps echo loud in her ears; it has drowned out all else, except the beating of her heart. What am I doing? I can’t go marching into Simon’s house—they will drag me out and have me stoned. Her thoughts turn toward Jesus: surely he will not accept me, I am a wretched woman. But He is my only hope; I am so desperate for a new life, I am imprisoned and there is no way out. I must get to Jesus. I have seen His wonders, I have seen His grace extended to many others; surely, there are crumbs left for me.

She can barely swallow for the lump in her throat. She paces back and forth, not quite able to bring herself to the gate. What will they say? How will they treat me? How will I get through the door without being thrown out? I must see Jesus. God of Abraham, help me.

Labels—they are so hurtful. This account of the woman with the alabaster box reminds me of the Scarlet Letter. Once a sinner, always a sinner; the scarlet letter is a permanent mark of one’s sin. This woman is a sinner, and she dares to enter the house of a Pharisee, and defile a Rabbi. Who does she think she is? Has she lost her mind? She is a sinner with no access to God; she is far from the reach of His grace. Which was a sinner; she’s a sinner; her sins which were many, these are her scarlet letters.

“For this reason I say to you, her sins, which are many, have been forgiven, for she loved much; but he who is forgiven little, loves little.” Then He said to her, “Your sins have been forgiven.”  Those who were reclining at the table with Him began to say to themselves, “Who is this man who even forgives sins?”  And He said to the woman, “Your faith has saved you; go in peace” (Luke 7:47-50 NASB).

“‘Go in peace’ was the last word the transformed harlot heard. It actually means, ‘go into peace.’ Peace was to be the new home in which she was to live.”

He sent her into peace; He freed her from the chaos and the prison of her sinful life.

Everyone wants a life that sings. We all desire to have a life of beauty. Sometimes, though, circumstances cloud our vision. My circumstances were anything but beautiful; they were downright ugly.  I was tired, worn out, and my eyesight had grown dim to the beauty and goodness of God. I struggled to find beauty in my life. In the midst of the mundane and madness, I had lost my song.

I learned that beauty is not defined by circumstances but by my reaction to the circumstances. Each of us has a story and a song, but will we leave the world with a gorgeous melody or an off-key tune? A song of joy and thankfulness or a song of bitterness and regret? The latter leads to isolation, the former to restoration.

When you live in bitterness, you feel unworthy and rejected, but God wants to make a great exchange with you; He gives beauty for ashes, the oil of joy for mourning, and the garment of praise for the spirit of heaviness (Isaiah 61:3).

Author Piper Green surveys the lives of some spectacular women in the Word and tells their stories in a way that reaches deep into a woman’s heart, enabling readers to relate to their stories in a profound way. These women felt unworthy, rejected, and abused, yet experienced God’s grace in miraculous ways. Come on a journey and be eyewitnesses to God’s restorative power in some unexpected lives—maybe even your own.

Piper is a writer, teacher, and seminarian. She writes about her passion, Jesus Christ, on her blog, www.witnessingthedivine.blogspot.com, and expounds on the Word to ignite in readers a hunger and thirst for God. Piper lives in Colorado at the foot of the Rocky Mountains, with her husband and three children.