How Being a Niece of President Eisenhower impacted my life 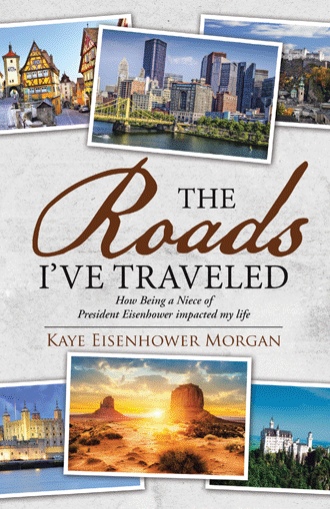 It was Sunday, December 7, 1941. Mother and Dad were listening to opera on the radio in the living room, and dad reading the newspaper. I was playing in the corner of the living room. Suddenly, the announcer broke into the program and told the world that Pearl Harbor had been bombed. Dad slowly lowered his newspaper and said, “Oh, My God,” in slow, sonorous tones.

In my seven-year old mind, I felt the world was coming to an end. Dad had never uttered such a dreadful proclamation! I can never forget that moment.

In a few months our lives would be turned upside down. Dwight, one of Dad’s older brothers, would be named Commander-in-Chief of the Invasion Forces to head up the greatest army the world had ever seen. War was declared on Japan and then Germany. Dwight would be commissioned to head up the European forces to destroy Hitler.

One clarification – The Eisenhower brothers always called Dwight, “Dwight.” However, to all his nieces and nephews, he always signed his letters “Uncle Ike.” That’s how we cousins knew him.

Uncle Ike kept up a regular correspondence with his many nieces and nephews, always remembering us on our birthdays and often at Christmas. In 1943 he sent Buddy an Italian officer’s pistol (with the firing pin removed) and to me he sent the silken, braided red, white and blue rope used on his staff car. No, I didn’t get the starred flag from his staff car, but it probably went to one of our cousins. Both of us got personally autographed pictures of him, and our cousins got similar pictures also autographed. A picture of Buddy and me was featured in the West Penn Newsletter with our new treasures. Buddy (Earl, Jr. which he preferred to be called when he grew up) kept his pistol to the end of his life. I donated my flag rope to the Eisenhower Museum many years ago. The pictures we kept and have continued to occupy prominent spaces in our homes.

We were fortunate to have spent time with Uncle Ike. He would make it a point to visit all his brothers when he could. Just before he was sent to Washington to plan the D-Day Invasion, he visited all his brothers, including us in Lock 4 (North Charleroi was also known as “Lock 4” because of the lock and dam #4 on the Monongahela River. In fact you could mail a letter to “Earl Eisenhower, Lock 4, Pennsylvania and that was sufficient address to reach us.). Uncle Ike was a very “down-home” kind of person and never stood on protocol or demanded any special attention. He was always “just one of the boys.

As time and the war rolled on, he continued to write many letters to family, including nephews and nieces and far-flung cousins. I’ve always believed his letter writing held the brothers together, as far apart as they lived, for the duration of their lives. After the war, each and every summer they would plan a hunting or fishing trip to Northern Wisconsin, Canada or other northern parts of the country. I remember one year when they hired a bush pilot to take them to a back woods area somewhere in Canada. The pilot dropped them off and came back a week later to pick them up. There was a small trading post in the area where they could get necessities.

Fame descended upon us. It was relentless. Reporters showed up out of nowhere. We had very little privacy. Everything we did could be the subject of a newspaper article the next day. Fortunately, our friends who had known us for years, were still our same old friends, and treated us the same as they always had. What we discovered, however, were “new-found” friends, eager for a piece of the spotlight. How my mother hated that. Dad took it in stride. I didn’t give it much thought, until about 1949-1952, when I was in high school.

All of Uncle Ike’s brothers experienced similar events. Unlike me, however, my cousins did not hit the spotlight as Buddy and I did, probably because of our ages. My cousins were all 12 years older and more, married, with children, and no thought or inclination of the fame that landed on our family.

Milton’s children, Ruth and Bud, experienced some of the same, but perhaps not the same as I did. Ruth had a different experience: her mother, Helen Eakin Eisenhower, died in 1954 of breast cancer at the age of 49. Consequently, Ruth became her father’s hostess when he entertained, which was a heavy responsibility for a 16-year-old.

Since Uncle Ike was constantly in the news, Mother stayed busy every evening clipping newspaper articles (we got both morning and evening newspapers each day) and pasting them in huge scrapbooks. Fifty years later the scrapbooks would be donated to the Eisenhower Library collections

An account from one member of Dwight D. Eisenhower’s family experienced during the height of his fame in the 1940s and 1950s. This story shows how fame can affect family members and how their future can be impacted.

This is the story of my life and how it was impacted because my uncle, President Dwight D. Eisenhower. The limelight followed me, and I seldom escaped it.

Because I was President Eisenhower’s niece, many things happened to me—some rather crazy. This relationship impacted my friends, my college life, my marriage, and on and on.

I was fortunate to get to know Uncle Ike, as he preferred to be called by his many nieces and nephews, and because of my numerous moves around the country, I also got to know my uncles living in Tacoma, Kansas City, and Penn State. Roy was the only Eisenhower brother I didn’t know—he died when I was quite young.