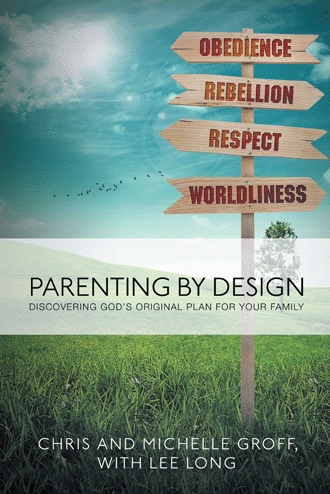 Raising children is no easy task. No matter the child, no matter the situation, every parent longs for obedience from their offspring.

God isn’t overbearing when He deals with us, and His example is perfect. There’s no question that kids want truth and love, as well as bonding and boundaries. Because God understands the human condition, He knows we learn best from hands-on experience, Jesus’ example, and the Holy Spirit’s empathetic examination of our hearts. We’re asking you to consider using the same parenting style with your children.

Parenting by Design offers a more relational approach to raising children, relying less on rote obedience and more on walking with your children through their decision-making development.

Forcing children to obey rarely works to build a healthy relationship that allows you to enter into their worlds and understand their decisions. This book will help you parent with grace and love, two key elements in motivating a child to obey.

Chris Groff
Chris is Executive Director of Parenting by Design and a co-leader of the Parenting by Design seminars. He has a business degree from TCU, law degree from Baylor, and Masters degree in Christian Education from Dallas Theological Seminary. He and Michelle have been married for more than thirty years and have two grown sons.

Michelle Groff, MA, LPC
Michelle and her husband Chris are co-founders of Parenting by Design, along with Lee Long. She received her BA from Texas Christian University and her Masters degree in Biblical Counseling from Dallas Theological Seminary. She is a member of the Christian Association for Psychological Studies and the International OCD Foundation.

Lee Long, MA, LPCs
The co-author and editor of Parenting by Design’s parenting curriculum, Lee is a full-time Christian counselor and regular Parenting by Design seminar speaker. He has a BA in psychology from the University of North Texas and a Masters in Biblical Counseling from Dallas Theological Seminary. Lee and his wife have three children.