The Only Way Out for Henry Clatt 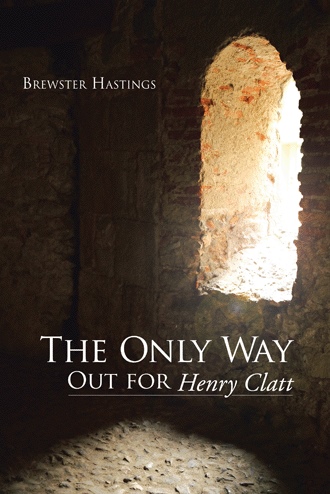 The exorcism was not going well.

The four pastors ministering to the tortured soul were as spent as the offensive line of the losing team in the Rose Bowl. Imagine them at halftime, trailing by sixteen points, sitting in the locker room before gunmetal lockers the size of caskets. They wait for Coach. He raises his right fist toward the fluorescent lights and counts off, unpeeling his fingers, pinky to pointer. He blasts the squad: “Let’s review what is not at stake here, not matter of concern: One, self-congratulatory showers of cheap champagne. Two, a trophy you will not remember by the time you turn twenty-five. Three, a noisy victory parade on campus that takes so long I’ll need to change my Depends. Four, a phone call from a recruiter at 8 am tomorrow sounding like some long-lost uncle who heard you won the lottery.” Then Coach slowly folds back the four fingers and thrusts his dignified thumb in an A-OK position and bellows in his best USMC drill-sergeant voice, “Boys! Men! This game is about honor!”

That might be college football: this, however, was not. These were four clergymen, leaders of their own congregations, thirty-five years past the gridiron, plus some. They sat together on a Sunday afternoon in the burbling comfort of the StarLite Diner. They occupied table eleven, a booth made of green faux leather and they tucked into cheeseburgers, fries and milkshakes. Theirs was the restrained, cozy silence of communal gratification, undistracted by niceties.

Three miles from the diner the topic of the pastors’ occasional remarks lay sprawled on an unmade bed in his modest apartment. His arms and legs felt as dead as lead, his heart like a bike tire with a slow leak, his head like a scuffed-up old boot. Thoughts and images circulated through his mind like anonymous chatter unconnected to the past or future. His name was Henry Clatt.

In twenty minutes, Henry would sleep thanks to a mild dose of Ativan supplied by his sister, Carole. She spoke as a nurse-in-charge, pressed a half tablet into his hand, and passed him a cup of tap water. Her simple command, “Here, Henry,” subdued him for a time.

This was his respite after ninety minutes of extraordinary prayers for deliverance. He needed the sleep and craved its escape. It was 3:30 in the afternoon. The night before, he had worked his regular eight-hour shift at Boils State Prison, plus an extra half shift to cover for another officer. Henry was due to return to the prison by 11 pm for his next shift. He would call in sick.

The four men sitting in the StarLite Diner also wanted to rest. It was Sunday, and they had all been awake since early morning. They would never use the word, but this unusual collaboration to pray for Henry was supererogation. It was work way beyond the call of duty. Each pastor lived in a distinct tradition, a steady course of living water within the universal river of life called the Church. They were Lutheran, Anglican, Pentecostal, and Roman Catholic. They shouldered similar burdens and embraced familiar joys, seen and unseen. They shepherded their people: the righteous, the not-so-righteous, the self-righteous, and the just plain selfish. They fed their people from the riches of the Lord and his Word, preached from the pulpit, celebrated in the sacraments, and sacrificed with praise and thanksgiving at the altar.

The Only Way Out for Henry Clatt is the story of a lonely man who wants more from life than a steady job and weekend hobbies. After a chance encounter with a woman named Cassandra, Henry is drawn to her group of followers and their Friday night ritual. There he finds purpose and the compelling attention of a strangely attractive woman. As Henry loses touch with himself and with those who truly love him, his sister and a team of down-to-earth pastors collaborate to save his soul. Henry’s story speaks to the heart’s desire for meaning in a confusing world. It also encourages those engaged in the search-and-rescue mission for lost souls.

Brewster Hastings is an Episcopal priest in the Anglican tradition. He is pastor of Saint Anne’s Church in Abington, Pennsylvania. Particular areas of study and practice include teaching the Word of God in cultural context, the ministry of healing, and the role of icons in ancient and contemporary liturgies. He will donate all proceeds from the sale of this book to local and international ministries which serve children living in poverty.