A Dramatic Account of an American Heart Attack Victim in Montreal 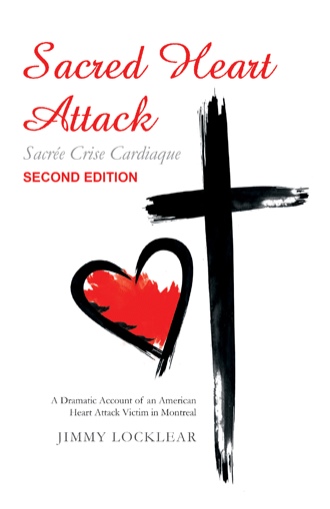 The Mystery of Chest Pains

On Wednesday afternoon, the third day of the workshop, participants from the different L’Arche communities were having country meetings. Those of us from the US were meeting with our fund-raising colleagues from the United States. Curt Armstrong, my friend from Atlanta and co-worker, was leading the session, and I was sitting in the circle of participants.

Around 3 p.m., the chest pain and burning returned more intensely than before. I excused myself and went to the restroom and then my bedroom in the villa. I couldn’t find relief from the pain and soon I could feel it across my chest and under my arms.

I went looking for Curt and around 3:50, as the session was ending, I told him that the pain I had experienced over the past couple of days and thought was associated with an upset stomach was now much worse.

Curt asked our event coordinator Chantal Coates to drive us to a local pharmacy to look for a stronger acid-reflux medicine. I bought a bottle of something and quickly took a large swallow of it in the parking lot. Nothing happened. No change. I was hoping to burp and feel better, but that didn’t happen.

We drove back to the villa and found out where the nearest hospital was located, picked up our friend Nathan Ball who was Canadian and the workshop leader, and headed to the emergency entrance of Sacred Heart Hospital of Montreal.

Chantal was concerned that the emergency room at the hospital would be crowded. But, Nathan had a plan. He said that they would walk in with me and Curt would find some official with whom to speak. And Curt would tell them that his friend was having a heart attack.

Around 6 p.m., as it was beginning to get dark, Chantal dropped off Curt, Nathan, and I at the emergency entrance, and we walked into a large waiting area that felt like an airport terminal lobby. Curt checked with hospital staff as I sat with Nathan and waited. Soon we were called back to talk with a triage nurse, and the action picked up from there.

It seemed like she quickly assessed what was happening. I handed her my passport, my insurance card, and a few medicine bottles in a plastic bag. She asked if it was okay for Curt and Nathan to complete my paperwork. After I said yes, she told me to follow her.

We stepped into a larger area with lots of activity. Next, Dr. Garner asked me to describe my pain and how long it had been going on. After some diagnostic test (electrocardiogram, blood pressure check, listening to my chest, etc.), he asked me to get undressed and lay down on the gurney. Soon after, Dr. Garner said, “I’m sorry to say you are having a heart attack, probably from a blood clot. We’re going to try to find it. You should’ve come in earlier.”

I had been having chest pains pretty steadily since about 3 p.m.; it was now about 6 p.m. I had no idea that the artery that was 100% blocked primarily delivered blood and oxygen to the left ventricle of my heart and the rest of my body. I was experiencing an acute anterior- wall ST segment-elevation myocardial infarction, more simply called an anterior myocardial infarction, that results from the occlusion (blockage) of the left anterior descending artery. It was a major heart attack, pure and simple. Heart cells were beginning to die.

I was stunned but not really surprised at that point. What else could it be? I had tried to address occasional chest pain for a couple of days as symptoms of esophageal reflux but without success. In his book In the Country of Hearts, cardiologist John Stone explained it this way: “Abdominal problems may masquerade as chest pain. Because nerves carrying impulses from the abdomen enter the spinal cord at about the same level as those from the heart, the gullible brain can be fooled into thinking that pain is arising from the heart, when it may in fact be coming from the esophagus, from an ulcer or from the gallbladder.”

I had certainly been confused, but the lesson learned was that, with modern technology and assessment tools being readily accessible, it’s best to go to your local hospital whenever you have chest pains.

My own stubbornness was not a new attribute to be revealed during this experience. I often wanted to withstand the pain and hope that I feel better later. And most times I was right. There is also the fear associated with admitting our weaknesses. While I had gotten better at doing that over the past few years, I was shy about sharing something as ubiquitous as chest pains because I knew what the response would be. Understanding that someone telling me that I should go to the hospital was a loving response and not a criticism, was not always as easy to receive as one might think.

A young man, probably a nurse although there wasn’t time for introductions, in medical scrubs asked me to open my mouth. He then sprayed nitroglycerin into my mouth in an attempt to dilate my arteries. A female nurse then pushed a needle into my arm to start an IV. A few minutes after giving me the nitroglycerin, the young man in scrubs asked whether I was feeling better, and I told him no. Although everyone was speaking French except when they were talking to me, I could sense the heightened intensity in everyone’s conversations. Another woman with a long needle asked if I had any allergies, wiped my belly with alcohol, and then stuck the needle in to give me medicine to thin my blood. There were two reasons to thin my blood: 1) to lessen the blood clot and blockage and 2) to make room for a tube that would be going into my artery for the angiogram. Despite its length, I didn’t even feel the needle.

One nurse shaved my groin and right wrist so the doctor would have both options for doing the angiogram. Another nurse added another IV and taped the oxygen monitor to my left index finger. Lying flat on the metal table was uncomfortable, and the pain in my chest was relentless.

Things were happening quickly, the young man who had given me nitroglycerin came back with a cup with about six round brown pills in it. He held my head as I swallowed them and chased them with a small amount of water. They were pain pills because I had ranked my pain as a ten (“I think I’m going to die”) on a scale of one to ten.

If I was trying to take a breath and see whether the pills worked, then what happened next made sure I was wide awake.

A female nurse said, “This is going to be cold.” She then began to “paint” a slushy mixture of iodine, alcohol, and ice shavings over my stomach, waist, groin, upper thighs, and right wrist. Her warning about the cold was an understatement, but relatively speaking, it was not a problem. That was followed by fabric adhering to my skin and paper being spread over most of my body.

Someone then put what looked like a clear plastic shower cap over a shoebox-sized white ceramic device that hovered just a few inches above my head….

“Even though I knew how the story would end, I couldn’t stop reading once I started. Jimmy narrates with attention to detail and with emotional vulnerability. I felt I was right there with him at each step of his journey.”

“Sacred Heart Attack gives an insider’s view of a process filled with tension, fear, and miracle. You can just about feel the slushy cold mixture of iodine and alcohol cascading over the chest, hear the incessant beeping of the monitors, and sense the gratitude for dedicated caregivers. Locklear looks beneath the surface of one of life’s most difficult experiences to find the strong hands of God carrying him through each hour of each day.”

“Nothing is easy—neither living or enduring and recuperating from a heart attack, as Jimmy Locklear writes in his insightful book, Sacred Heart Attack. Finding meaning—and hope—is just one part of this story. For Jimmy also shows a commitment to not only his personal story but the story of others involved in this process. He does not give himself to despair or bitterness. In fact, he perseveres to the end. In so doing he invites the reader to join him in his story and to make it part of their story. It is a wonderful experience.”

Jimmy Locklear has a passion for spiritual topics associated with living from our true selves. His second book, Heart Journey, was published in 2013. Locklear is married and father of three sons. He is a church elder and Atlanta Salon member. A native of Chattanooga, he and his wife, Jenny, live in Atlanta.