if you get there before I do... 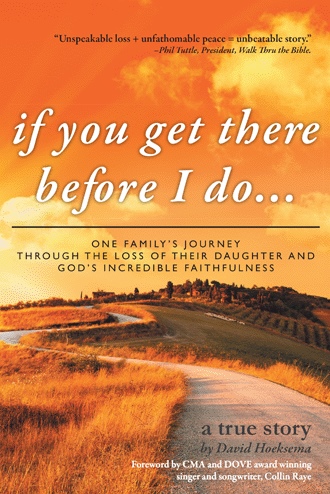 Life changes quickly. After the birth of our daughter Kjrsten, my wife Ardeth and I were blessed 22 months later with a son we named Hans. Our family of four was growing up fast. Hans was loving seventh grade and full-contact football. Kjrsten was now in ninth grade and blossoming into a wonderful young woman.
Kjrsten was a fighter, stubborn and strong. One summer day I remember, we (Kjrsten, Hans and I) were working outside constructing a sorting corral for calves. A hot, sticky day and the work was not progressing as well as their father would have liked. I commented to my children if "their attitude and productivity didn't improve; we'd be out here all day." I heard Kjrsten mutter under her breath and I challenged her about the 'mutter'. Kjrsten simply replied "then I guess we'll be out here all day." With her simple, direct and honest reply, it was all I could do to stifle a fit of laughter. Work progressed much better from then on.

Kjrsten excelled at everything she set her mind to. A straight 'A' student, starter on the freshman volleyball squad and one of Dad's right hands on the little farm we called hobby.

The headaches returned, but were differnt this time. Coming more frequent and intense with episodes of dizziness. Our doctor suggested blood tests, MRI and an appointment with a neurologist. The plan was set. As things progressed and Kjrsten was to have the MRI on Monday (Sept. 13, 2004) she expressed her concern about what would be found. While watching the news on Sunday (Sept. 12, 2004) the story of Terri Schaivo was being aired. After watching for a moment, Kjrsten turn to me and said clearly "Daddy, if anything happens to me and I end up living on a machine, you pull the plug. You let me go. I'll just get to heaven before you do." A startling bold statement to which I responded, "Fine, but if you get there before I do, I expect you to be waiting for me at the gate when I get there." And so the deal was struck. We laughed about it never believing we'd have to abide by the agreement.

And as the pages of this book reveal the story, we are waiting to be reunited with Kjrsten. Excitedly waiting at Heaven's Gate to greet us as we arrive. She has been waiting since September 16th, 2004.

In contrast to these busy first few weeks of establishing back-to-school routines, as well as the uncertainty of medical tests for Kjrsten, I reflected back on the quiet respite we’d had over the past summer.

One of our favorite summer activities was to sit on the long, covered front porch of our home and watch the storms as they rolled in from the west across Clear Creek. We’d listen for the thunder and see the lightning striking at the bottom of the hill as the storm climbed upward and through the cornfield to the edge of our yard. We were relieved as it rumbled noisily over the top of our house without leaving any damage as it continued its steady march to the east.

Little did we know what kind of storm was brewing for our perfect little family.

David Hoeksema, as founder and president of Renaissance Group, Inc, Des Moines, Iowa, has served non-profit organizations across the United States in a fundraising consulting capacity since 1983. He is a graduate of William Penn University. David and his wife, Ardeth, attend an evangelical church and serve in youth, adult, and mission ministries. David and Ardeth have two children, Hans, a college student, and Kjrsten, who has been waiting to greet them at heaven’s gate since September 16, 2004.