The Agony and Ecstasy of the Bipolar Mind

Old and New Healing Methods that give Hope to All Humanity 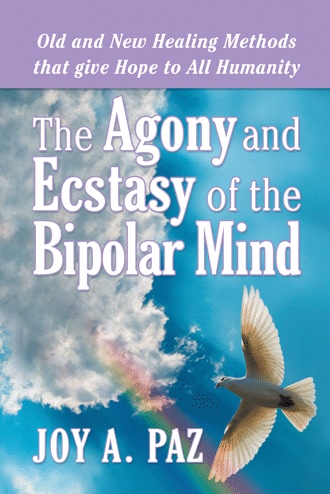 This book was written to inform, encourage, and to give hope to bipolar patients and their families. Also included in this book are healing methods for all humanity that are based on energy, the new medicine of the future. Other topics are: holosync audio technology, hypnosis, brainwave entrainment, vibration energy, manifestation intelligence, learning strategies, the genius code, brainwaves, positive and negative cellular memories, core beliefs, image streaming, conscious and subconscious minds, energy frequency, super longevity, right- and left-brain synchronizing, Einstein’s theory of relativity and quantum physics.

There is considerable information regarding the control that our subconscious has on our conscious mind. I quote several world-renowned speakers who deal extensively with this awareness. After living in Brazil for eight years, I take the reader into the jungle of Brazil, along with the asphalt jungle, Sao Paulo, the third largest city in the world when we lived there in the 1970s; and also our adventures on three continents. I also take the reader into my mind during a manic psychosis and my husband’s depressed psychosis. There is hope offered throughout the book with humorous stories. I welcome you to join me in the excavation of the mind and to realize the possibilities and potential in each of us.

Joy A. Paz was born and raised in Ohio and attended three universities; John, her husband, attended six universities and has a doctorate degree. John and Joy lived in Brazil for eight years. They have traveled to eleven countries and “danced” on three continents. They both have bipolar; manic and depressive.