Take Someone with You to Heaven 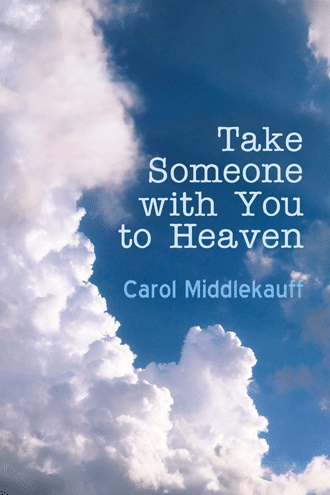 Millions of ordinary Christians believe in the realities of heaven and hell. They believe they are sinners. They believe Christ died to pay the penalty for their sins, and rose again. Most of these Christians discovered new life in Jesus through one-on-one encounters—living rooms, airplanes, gas stations, and front porches—personal evangelism. However, less than five in a hundred of them have introduced even one other person to Jesus. Will you?

Take Someone with You to Heaven

Chapter 2—If You Don’t Tell Them, Who Will?

Chapter 4—Taking F.A.I.T.H. to the Streets

Chapter 9—What about You?

The Great Commission—Jesus said: “All authority has been given to Me in heaven and on earth. Go therefore and make disciples of all the nations, baptizing them in the name of the Father and of the Son and of the Holy Spirit...” Matthew 28:18–19 (NKJV) (Emphasis mine)

Besides your own salvation experience, has anyone—outside church and not counting cussing—ever mentioned Jesus to you? Surveys show that—including pastors—only maybe five out of a hundred Christians have ever told anybody else what Jesus has done for them.

The other ninety-five Christians are missing the joy of being there when someone receives God’s gift of forgiveness (which is only available through trusting in Jesus) or when a prodigal person restores a broken relationship with Him. But you can have that joy.

I’m the most ordinary person you can imagine. What is extraordinary is that, when I show up, prayed up and ready to obey the Holy Spirit’s lead, I have the thrill of watching God work—in me and through me. You can have it, too.

Maybe only one in hundreds didn’t want to talk about God at all. Those rare conversations usually ended abruptly. As you will read in these stories, a couple of those individuals even shouted at me. But I know they weren’t rejecting me; they were rejecting Jesus. I figure He’s working on them, or He wouldn’t have sent me.

Life gives you things you have to do, things you want to do, and things you get to do. Sharing the hope of a Father in heaven who loves us and the promise of forgiveness in Jesus is one of those things you get to do. You just have to start. You’ll find out for yourself how much joy it brings. Like me, you will wonder why you didn’t become a serious soldier in God’s army when you were younger.

No matter how many soldiers are on the battlefield, they will not win the battle unless someone marches forward when the commanding officer shouts “CHARGE!” Have you heard God’s order to charge—the Great Commission—but you are still just standing there? If you’re ready to march, I hope these stories will encourage you by showing you how simple it is to tell people about Jesus. I hope you are getting excited about seeing the extraordinary things that will happen when you do.

I was raised in church in Amarillo, Texas. Even so, I had not grasped the reality that Christ died for my sins and that I had to receive His gift of salvation personally. I guess I thought I was a Christian because I went to church.

When I was fifteen, a new minister invited the youth group to a special event at the Amarillo Arena. The arena usually held the trappings of rodeos and stock shows. But on this night, as I climbed the steps to the highest level, I saw a big banner: “Billy Graham Crusade.” Billy Graham’s team had come to tell me about God’s simple plan: personal faith and trust in Jesus alone for salvation.

I can’t remember who went, how we got there, or exactly what they said. All I know is—in spite of my timidity about doing anything in front of people, and without even thinking who else was going down with me or how I might find my group and get home—when they sang, “Just as I am, I come, I come,” I walked down those steps and onto the arena floor. With hundreds of others, I prayed to accept Jesus’ forgiveness, and I asked Him to be my personal Lord and Savior.

After that night, slowly but surely, God started working in my life. Here’s an example:

Still a teenager, I took my friend Stephanie to a folk music concert at my church. We heard a strong Christian testimony from Ed Kilbourne, Jr., a young man who obviously loved the Lord.

Later, when Stephanie and I were students at the University of Texas in Austin, I invited her to hear former agnostic, Josh McDowell. The research he had conducted in an attempt to debunk Christianity had instead turned him into a passionate Christian. I had no way of knowing that, though Stephanie had accepted Jesus as her Savior when she was in high school, lately she had been wondering what she believed. That night Josh’s answers to some tough questions locked in her faith in Jesus as the Son of God, the Way, the Truth, and the Life.

In time, Stephanie joined the Campus Crusade for Christ ministry and met an engineering student, Bob, at the meetings. They finished their degrees, got married, and committed their lives to full-time service to God. Joining the Campus Crusade staff, they left the United States to serve in Africa and other countries. God has touched countless lives because they obeyed His call.

Meanwhile, I married Chuck Middlekauff. A few years later, when Stephanie and Bob returned to the States on a furlough, they attended a conference in Fort Collins, Colorado. Since the campus apartment where they were staying wasn’t far from where we were living north of Denver, they invited us over for supper.

Chuck wasn’t raised in the church, didn’t like it when I brought up church or God, didn’t like mingling with people he hadn’t met—especially missionaries—didn’t care about meeting Bob and Stephanie. You’re right, Chuck didn’t want to go to supper at all.

“All I want to do is visit my forever friend,” I begged. “And she and Bob want to meet you.”

Chuck finally agreed to go. But driving north on Interstate 25, he kept saying, “Don’t you dare bring up anything about God!” I promised I wouldn’t. But...

If you have been chicken to share your faith so far, this book will encourage you to stop your sin of silence and start enjoying a new fullness in Christ, experiencing the joy that comes from truly following Him. —Bill Fay, Evangelist and Author of Share Jesus without Fear

Your heart will be set on fire with a holy passion for souls as you read story after story of how God uses a faithful, available, intentional witness for His glory. —Dr. Michael S. Lewis, North American Missions Board

Carol Middlekauff has written the stories of some of her encounters as she has shared her faith so you can appreciate how easy it is to tell people about Jesus. It happens when you realize that God does all the work, and all you have to do is show up. —Bill Glass, Founder of Bill Glass Champions for Life prison ministry

Anyone can share their faith with others. That’s the message Carol Middlekauff delivers in her account of the many divine appointments God has given her. You will be encouraged by her real-life stories and motivated by her challenge. —John Sorensen, President, Evangelism Explosion International

In the pages of Take Someone with You to Heaven, Carol Middlekauff of Austin, Texas, tells personal stories about sharing the love of Jesus. As an ordinary person, she writes to ordinary readers, showing them how easy personal evangelism can be. Each story demonstrates the extraordinary things God does in and through anyone who is willing to share His love and the good news about Jesus. Praise God, that anyone can be you! Are you going to heaven? Will you take someone with you?

Born in Amarillo, Texas, Carol Middlekauff stands five feet tall, 110 pounds, with green eyes, chin-length gray hair, and glasses. Retired from the insurance business, she doesn’t really look like a runner, a writer, or someone who might spend time in jail. And she isn’t a preacher. She’s just an ordinary person. But she and her (also ordinary) husband, Chuck, head out from their home in Austin, Texas, to share their faith as they go along—at the grocery store, on the running trail, by gas pumps, and in prisons and jails across the United States.

Middlekauff received her teaching degree from the University of Texas. And she’s an incurable writer and traveler. You may have seen her travel, profile, and insurance articles in publications such as American Cowboy, New Mexico, Rough Notes and other magazines, or the Dallas Morning News, Kansas City Star, Boston Herald, San Jose Mercury News, New Orleans Picayune, and other newspapers. As she began to write down some of the stories of the amazing things God does as she and her husband share their faith, those stories became a teaching book, Take Someone with You to Heaven.

Here’s why. Most preachers and pastors tell us to go and do God’s Great Commission, but they don’t explain just how to do it. So, most Christians don’t do it. Middlekauff’s prayer is that the stories in Take Someone with You to Heaven will encourage you to go and do His Great Commission by showing you how easy it is. It is easy— because God does all the work! All you have to do is show up, prayed up and ready to do His will. And just do it.