Are You Guided by the Good Shepherd? 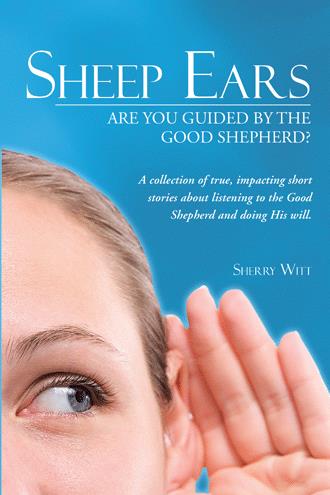 This collection presents impactful short stories about listening to the Good Shepherd and doing His will.

What would you do if God told you to stop mowing the grass, get $125, and immediately give it to your neighbor? Could you trust God to bring you a blessing after you were attacked by dogs? How would you handle a coach treating your son unfairly? Has your child ever informed you that he or she was going to cheat on a test? Did you want to mend a relationship, but were unsure of how to do it? Sheep Ears seeks to answer these questions and many more.

Learn how the Good Shepherd guides Sherry throughout her everyday occurrences by using her spiritual “sheep ears.” Take a journey through her life and watch the miracles that happen in her ordinary days. Real biblical truths personalize each story with relevant, open-ended questions and scriptural answers. After reading Sheep Ears, your eyes can truly open to the wonder of God in every facet of life.

Offering eighty poignant stories, <em>Sheep Ears</em> provides something for everyone in your household. You’ll discover that the answer to every problem that you have is in the Bible. You may have been hearing from God, but never realized it.

People want to know—have you got sheep ears, too?

“Sheep Ears left me spellbound with real-life lessons that kept me turning pages.”

“Sherry sees God in places that I forget to look. Her writing is down-to-earth and encouraging to those of us who seek His face.”

Sherry Witt attended Wayland Baptist College. She married her high school sweetheart, Randy, and they have resided in Pine Bluff, Arkansas, for the past thirty-seven years. They have three sons and four grandchildren.