Finding God in the Seasons of Divorce

Vol I - Autumn and Winter - Seasons of Loss and Sorrow 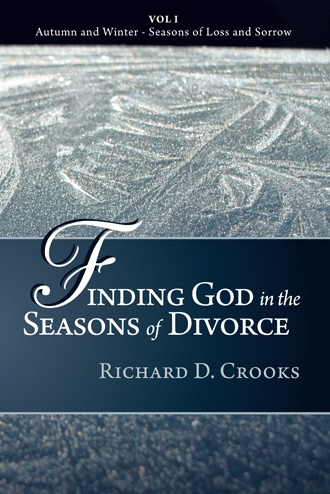 Let’s reexamine today’s passage from a perspective that may be different than you are used to:  that of the son, and what he expected would happen.  He knew that his actions had created most of the mess he was in.  He knew that he should have listened to his father in the first place.  He knew that he deserved whatever punishment or lack of consideration his father chose to give him after he had wasted all his inheritance.  What he didn’t know, though, was what his father was really like.
Today, what is it you know?  Maybe you actually feel like God doesn’t want you.  After all, your marriage has “failed.”  Or you didn’t come to him when things were going well, why would he want you now that things are falling apart?  Or maybe you have decided that God is like your spouse…..loves you to a point, but now is ready to give up on you.  You really wonder if God can possibly love you, with your life all screwed up, and your hopes all dashed, so in your brokenness you are convinced you are worthless.  How amazed that son must have been when he didn’t even get the chance to give his prepared speech to his father, because his father was so excited to have his son back, he ran out to meet him, brought him a new robe, the family ring, prepared a feast, celebrated exuberantly over the restored relationship he now had with his son. The son had no idea that his father was that kind of person.  He had concocted the idea that his father was a taskmaster, who might grant him a job, but would never forget how his son had squandered the opportunities given to him.
I do not know how you are feeling today.  Nor do I know how you are feeling about your relationship with God or your sense of responsibility for the marriage you have lost.  No matter what the case in regard to those issues, I would like today to help you enlarge your vision of God.  It may even require you closing your eyes and daydreaming a bit, seeing in your mind’s eye an image of a father, running out to meet his son with gleaming eyes, profuse kisses and great joy……and in that daydream, realizing that you are the one God is celebrating!  It may be you have wandered so long and so far, or are so deep in despair that you have no sense that God notices or cares.  As a father myself, let me assure you, you never forget your children.  When they make mistakes, when they misbehave, when they yell as teenagers are prone to do, even if they turn you out of your lives…the fact remains…..there is always a special place in a father’s heart for his children….confused though they may be.  You are in the Father’s heart…..always…..even when you know you are far away, and even when, among the pigpens of this life you feel absolutely alone and unlovable.  Spend some time soaking in the depth of God’s love for you as you read once again this marvelous story of a father, running with joy to meet a troubled son. 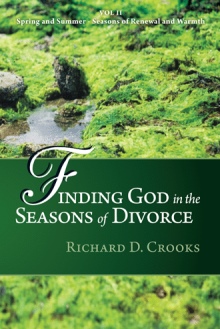 Finding God in the Seasons of Divorce
Richard D. Crooks
$22.95

Finding God in the
Seasons of Divorce

A daily devotional for individuals working through the emotions and difficulties of divorce, this first volume, Autumn and Winter, deals with the early days of divorce, when so much of life is falling apart, becoming so difficult and uncertain. The book helps readers learn how to cope and to see that they are not alone, that God does care, and that the struggles have been faced by others as well.

This devotional is designed to coincide with the “seasons” of the process of divorce or other loss.  Hence, readers may read daily or read the devotional at their own pace in an order that will bring help and encouragement as they slowly heal from divorce. A topical index addresses specific needs.

Richard’s experiences result in a book that is a comforting, encouraging “voice in the wilderness” as readers seek to find God’s hand in new ways. This book is a resource, not only for pastors and counselors, but for anyone who desires to help a struggling friend or family member in the wake of divorce.

Richard Crooks (MDiv, MPh) is an ordained ABC/USA minister, has pastored since 1983, served as a college campus minister, taught college and seminary classes.  After his 1998 divorce, opportunities for ministry with divorcing individuals opened.  He has keen awareness of the devastating impact divorce has on couples, children, and extended family.  His own struggles and experiences in ministry bring personal impact to these pages.  Richard does not claim all the answers but knows Christians struggling with divorce need support and resources from others who have shared the struggle.

Remarried in 2004, he and his wife, Nola, have ministered in a variety of ways to others struggling with divorce.

You can find his blog at www.findinggodintheseasonsofdivorce.blogspot.com.