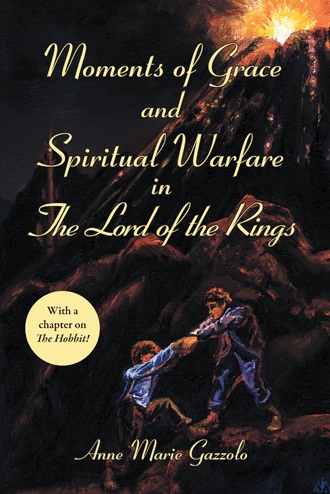 Frodo protests that he does not have what is needed for the terrible task that looms over him. This assumption that we know ourselves and our limitations is quite common. We must realize, however, that God knows us far better and chooses us for the strengths that He sees in us, even those that have not yet manifested themselves. An observation Jentezen Franklin makes about why Jesus chose twelve particular men as His disciples also fits the hobbits who venture out beyond their land: “He did not choose them because of what they were to start with. He chose them because of what He knew they could become through His mighty power infused with their passion” (Believe That You Can, 85-86). God knows that Frodo has a great store of courage within. He allows the Quest to play out as it does so that the hobbit can discover this himself.

Frodo’s objection about not having the strength required to fulfill a perilous vocation will echo through the ages. To name just a few Biblical examples, Jeremiah will say that he is too young (Jer. 1:6), Isaiah will protest that he is too unclean (Isa. 6:5), and Gideon will think himself too weak (Judg. 6:15). Many of us naturally resist what seems impossible or incredibly dangerous. Fear can seize us after we learn that we must leave our comfortable life behind and become a needed instrument of God’s will to destroy some dread evil. As we cry “Why me?” and quail before the wave ready to drown us, we must understand what Frodo comes to know during his ordeal: God does not call the equipped; He equips the called. Few of us think that we are superheroes out to save the world, and we should not necessarily trust those who believe that they are. Better to be like Frodo and all those who are terrified and want nothing to do with what is asked but still submit themselves to the fact they were indeed chosen. They shoulder their crosses not out of ambition or a quest for glory but out of love and service, and through blood, sweat, and tears accomplish what they are meant to do. Let us say with them, “Here I am; send me!” (Isa. 6:9) and “Nevertheless, let your will be done, not mine” (Luke 22:42).

The more we surrender control over ourselves to God, the more wonders He will work in our life as we discover our own unique vocation. We must trust that if we take the first steps, God will remain with us. Though the path may become dark, His Light will always be there, even if we do not perceive it. “I know God will not give me anything I can’t handle,” Blessed Teresa of Calcutta said. “I just wish He didn’t trust me so much.” But what is so beautiful, humbling, and awe-inspiring is that He does trust us. He, who is Power itself and could do all things far more perfectly than we ever could, chooses instead to use us frail, mortal, quivering, imperfect creatures. He will not give us a task that is beyond us, even if we think that He has. If we cooperate with His grace, we will discover the strength that He has given us, which sometimes can be refined only by passing through fire. This is a lesson Frodo learns and teaches on his terrible journey.

With the choice made at the Council of Elrond to take the Road to the Fire, the next decision concerns who will bear this terrible burden. Bilbo volunteers even though he complains that it will take time away from his book and ruin the happy ending that he plans for it. Gandalf, however, refuses him. In the silence that follows, the ancient hobbit’s reason for being nears fulfillment. He was made to be Ring-finder and to keep it safe until its next Bearer was chosen. In giving Frodo love and security, Bilbo has shown his beloved heir what is worth fighting and even dying for. This gives the younger Baggins the strength to fight and win one of the most important battles in the War of the Ring. Frodo could have said no after the Holy Spirit presents him with his full vocation. He could have chosen to remain silent, but he does not. In speaking of this and the decisions that confront us all, Cheryl Forbes wrote, “we choose to be chosen” (“Frodo Decides - Or Does He?,” Christianity Today, December 19, 1975, 12). “For we are His workmanship, created in Christ Jesus for good works, which God prepared beforehand that we should walk in them” (Eph. 2:10, NKJV).

Even though it is true that “what you are to say will be given to you when the time comes; because it is not you who will be speaking; the Spirit of your Father will be speaking in you” (Matt. 10:19-20), this does not mean that the Holy Spirit coerces a decision from Frodo after stirring the hobbit’s heart to accept his calling. Although God knows our answer before we do, He still gives us the free will to choose it. Our vocation is His gift to us, and He wants us to unwrap it. Nevertheless, He has such great respect for the decision-making powers that He gave us that He does not force us to do anything even though He knows it will benefit us or others. Frodo knows what it is like for an outside power to usurp his freedom. Though he does indeed feel that another will speaks through his voice, it is not the terrible violation of the Ring, which bludgeons if it cannot seduce. The hobbit longs to stay in Rivendell with Bilbo, but instead, to his own astonishment, he allows his fiat (Let it be done) to be spoken by him and through him.

None of the Wise say “I will take the Ring” (LOTR, 264). Rather a frightened, mortal hobbit freely speaks “the sacramental, operative words that set in motion the only power that can conquer Sauron” (Kreeft, “Wisdom,” 39). It is an amazing thing to hear from such a small being, who has already nearly suffered a fate worse than death. But it is precisely because Frodo is literally and figuratively little that he was chosen for this task. Gandalf and others of the Wise recognize in their strength how terribly weak they truly are and dare not touch the Ring. Frodo, in his humility and knowledge of his weakness, discovers his strength. His fiat takes him on a harrowing journey that his heart already quails to contemplate. Enabled by his cooperation with the grace that continually fills him, he receives the strength to hold to it.

Frodo demonstrates that it takes great courage and sacrifice to say yes as we scream no inside and to give up control and totally surrender ourselves to Someone else. Yet in this crucible, we discover the person God has already seen us becoming. An Australian professor, Barry Gordon, noted Frodo is “the Lamb whose only real strength is his capacity to make an offering of himself” (“Kingship, Priesthood and Prophecy in The Lord of the Rings,” uoncc.wordpress.com). As he, Aragorn, and Gandalf respond to their callings, Clyde Kilby observes that each “grows in power and grace” (Tolkien and “The Silmarillion,” 56). Surrender is not a one-time event that needs no repeating but an ongoing embrace every day and every moment. Under the coercive pressure of the Ring, Frodo says no several times, but with almost every breath and step he takes, he says yes, even as those breaths and steps become harder to take.

In J. R. R. Tolkien’s desire to create a mythology for his homeland, he actually made one for every person, every land, and every age. The Lordof the Rings is a catechism of spiritual warfare cleverly disguised as a fantasy. The struggle against evil that takes place inside its pages is the same one that occurs even now within the soul of each person.

As we cannot leave the field of battle until death takes us from it, we should learn as much as we can about how to fight from those who have labored before us. Certainly the Red Book of Westmarch is one source to use. We may not have to sacrifice ourselves as does Gandalf, but we can learn from him and his wise counsels and from the others who he taught. Frodo guides us as well, as he makes his torturous journey to Mount Doom and endures the Ring’s unceasing temptations. With him, we see that sometimes we overcome our temptations, and at other times they overwhelm us. We also learn, as he and Boromir do, to get back up and start the struggle anew. Sam shows us the height of hope and the depth of devotion. In fact, everyone in the tale, good as well as evil, has something to teach us.

Anne Marie Gazzolo hopes that you will find inspiration within to apply to your life.

Anne Marie Gazzolo has had papers presented at 2008, 2009, and 2010 Tolkien Society Seminars. The first of these was also presented at Mythcon 41 in 2010. Her essays have appeared in Beyond Bree, Amon Hen, StAR, and Silver Leaves. She lives with her sister in a suburb of Chicago.