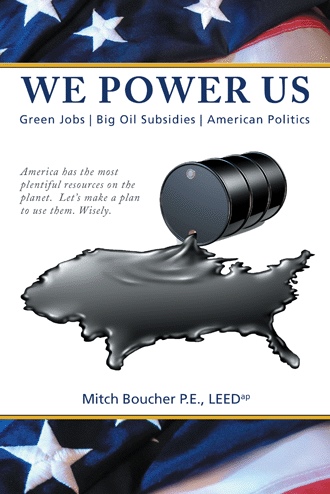 Our Energy Future is at a Crossroads:
We Will Become Energy Rich or Energy Poor

There are two paths which we can pursue in regards to energy.

One path is less structured, it is less well planned and has less detail in the government role for the plan. It is harder to understand and harder to see in the first year of the plan what the solution will be. It will produce many options, and some of them will fail. The people that loose investments in the failed plans do so by their own free will. That capital will be destroyed. They will invest because of the great drive in the human spirit to explore and achieve. The plans that fail will fail “small” and in small numbers because exceedingly bad ideas will not attract investors. The plan people invest in will have personal meaning, for their own individual lives. Maybe a business owner who grew up on a windy plain is driven to develop wind turbines. Maybe a young boy who helped his father in a plumbing business will develop the new pump that enables deep earth high temperature pumping from oil shale fields. It will also produce many options that will succeed. Those ideas that succeed will produce many jobs for the American people. Those people that work in those businesses will take great satisfaction in their efforts and the work of their hands. Some jobs will pay average wages, some jobs will pay more. Some people will become wealthy due to the millions of uses for their idea, and some people will become millionaires. Those ideas will reduce the cost of energy because in order to succeed they will produce services and goods at a lower cost than the market place. Economic efficiency will increase because people will have more money to spend on other things like children’s education, or a new car to go back and forth to work, or a second car so mom can run errands during the day. Some of those ideas will reduce emissions and pollution. Overall, the quantity and quality of the successful solutions, the cost of services, and the energy efficiency will all improve, because each idea improves upon the last, and many people are all working at the same time in so many diverse and different directions. Society will look back and marvel at the way things used to be, and at how unchartable the path was to ultimately the best solutions. The first plan is rooted in the worth, dignity and freedom of the individual, and these people understand those freedoms to be natural inalienable rights. This plan requires a trust and faith in the God given creativity of people and their ability to produce great ideas.

The second course flows from an overall national energy policy which identifies the most likely successful energy courses. It is structured and developed by a select group of energy experts. The policy is based on an energy model developed with several scenarios of the future to insure that many alternate courses of action are considered. Many very bright minds develop reports to simplify and explain the plans and how we will achieve success. They do a very good job. Government commissions and departments are developed and industry experts are tapped to develop implementation plans. All this central planning and research and development costs a lot of money. Some of these projects will fail. They will fail “huge”, because they concentrated large sums of taxpayer money into the development until it was undeniable that failure was evident. This money was taxpayer money, and borrowed from future generations of children who must now pay it back. That capital is destroyed. Because the failures destroyed large amounts of capital and effort, the economy is adversely affected. Energy costs rise, jobs are lost. But, they will change their plans slightly and continue their efforts because of the great drive in the human spirit to explore and achieve. They also work hard because the rest of society is depending upon them and everyone looks to the government for a solution. New regulations from the large central planning government will seek to reduce exposure to risks by limiting actions and activities. There will be ozone action days to reduce gasoline use on particularly hot days. Some groups will propose taxes on energy to reduce energy use, since it appears that energy supply is in crisis. Some projects will succeed and produce energy from new sources. But the energy costs will be slightly more than the current cost, because the development was subsidized and not optimized. The overall costs continue to rise since the number of potential solutions in the development phase are limited. Costs rise because the government taxes impact the economy and inflation drives the costs upwards. Cost rise because we focused on a particular clean energy and it was not the least expensive energy. But we would never know. The other options were never attempted. Since the politicians in the government are focused on the successes in order to get re-elected, we only hear the news about the good ideas. The good news lifts our spirits somewhat. There are still a modest number of jobs available, because taxes keep rising to pay for energy projects. The taxes are levied on the higher wage earners and small businesses, since they were successful and earned more income. There is no class envy now because everyone (except those in government) is a lower-middle class wage earner. A prosperous solution to the energy supply crisis is never discovered, because prosperity was not the goal. Prosperity was shunned by the politicians in order to create envy, which made people comfortable in their mediocrity. The second plan is rooted in the concentration of power and capital at the top, in government. Few people own businesses. The plan is marked by values that are developed by whomever is in power. This plan does not require any real work, since there is no real personal responsibility. It gives most people the ability to blame someone else for failure.

Which course you believe in depends upon your current experience and your belief in how we came about to be on this planet, in this time. Among other things, you will become energy rich or energy poor based on your choices.

Old men used to sit in corner stores and discuss business, work, and politics. Women used to come together and talk about the men as they took care of the home and children, or even more recently as a part of the workforce. Today, however, politics is a shunned topic, and conversation is all but dead. It is difficult to stay informed and talk with each other about life and politics.

It is even more difficult to stay informed on a technical topic such as energy and something as double-sided as politics. Yet it is imperative that people stay informed and well-connected to direct their government.

This book shows how the government (President, House and Senate, left and right) have destroyed the energy industry, taxed the middle class, and prevented well thinking, regular folks from solving our energy supply crisis. This book has thirty-three charts and graphs, most from bi-partisan or independent government sources to make a case for less government involvement in the energy industry. There are some astonishing revelations and a compelling case for reducing air emissions by 60 percent and creating jobs at the same time by building a particular type of new generation. This is a compelling argument that has never been presented before. I hope you enjoy the read.

Mitch spends his personal time on a small hobby farm with his wife and two great kids. Mitch is a licensed engineer and has more than twenty years of engineering and operations experience in utilities, operations, and construction. He has presented topics at GreenBuildtm and engineering conferences across the country.