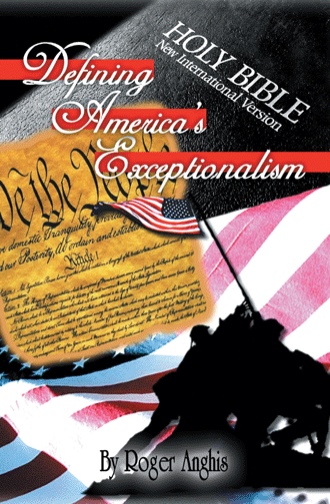 For the first time in man’s history if a people did not like those who governed them, they could peacefully and non-violently replace them.  When, at the end of George Washington’s second term and he stepped down and the office of the president went to the newly elected John Adams, the world witnessed for the first time a change of a ruler without bloodshed.  America is the only nation explicitly founded upon the principles of human equality and natural rights or as our Founders referred to it, God given rights.
The American experiment, in my opinion, is the ultimate lesson in exceptionalism.  Never before had a people created a government that allowed the people to attain the wealth and freedoms that the American people have.  There are other nations with wealthy people but only in America can a person be born into abject poverty and through the sweat of his brow and perseverance become unimaginably wealthy.  Many have done it.  Many more will.  Why is this possible only in America?  There are many factors that can be accounted for this but I believe that the foundation for the unparalleled success of the American experience is the principles of the Founders that were grounded in their Christian faith.  Those principles created a nation of people that are the most affluent, generous, hard working and educated, and dedicated to their Christian God than any other nation on earth.  America has only 6% of the world’s population but we produce 25% of the world’s wealth.
The American system not only successfully created a sovereign people but put into the hands of the people the political authority needed to allow the people to be as successful as they wanted to be while at the same time keeping government from controlling that growth.  It is a unique blend of Western civilization, Judeo Christian values all combined with political liberties.  This had never been tried before.  In most cases it had never been allowed. Our Founders believed, and rightfully so, that the only legitimate power of government is through the consent of the governed.  This concept is the foundation of the American government, the source for our independence and the guidelines for our society.
The unfounded declaration from today’s revisionist historians that our Founders were atheists and deists has no written historical basis.  In fact when you study the personal writings of the Founders and of the Founders contemporaries you find just the opposite.  Even the records of Congress refute that unfounded claim.  Elias Boudinot, President of Congress; signed the peace treaty to end the American Revolution, was the first attorney admitted to the U. S. Supreme Court Bar; was a framer of the Bill of Rights and Director of the U. S. Mint stated before the First Provincial Congress of New Jersey: “[L]et us enter on this important business under the idea that we are Christians on whom the eyes of the world are now turned… Let us earnestly call and beseech Him, for Christ’s sake, to preside in our councils. . . . We can only depend on the all powerful influence of the Spirit of God, Whose Divine aid and assistance it becomes us as a Christian people most devoutly to implore. Therefore I move that some minister of the Gospel be requested to attend this Congress every morning . . . in order to open the meeting with prayer.”  In the belief that Christian principles were the most valuable to mankind John Jay, President of Congress; Diplomat; Author of the Federalist Papers; Original Chief Justice of the Supreme Court and Governor of New York stated: “Providence has given to our people the choice of their rulers, and it is the duty as well as the privilege and interest of our Christian nation, to select and prefer Christians for their rulers.”   Most of the Founders made similar statements.  Benjamin Franklin stated: “As to Jesus of Nazareth, my opinion of whom you particularly desire, I think the system of morals and His religion as He left them to us is the best the world ever saw or is likely to see.”  James McHenry, Revolutionary Officer; Signer of the Constitution; Ratifier of the Constitution; Secretary of War under George Washington and John Adams claimed:  “Public utility pleads most forcibly for the general distribution of the Holy Scriptures. Without the Bible, in vain do we increase penal laws and draw entrenchments around our institutions.”  Benjamin Rush, Signer of the Declaration of Independence; Surgeon General of the Continental Army; Ratifier of the Constitution; “Father of American Medicine”; Treasurer of the U.S. Mint; “Father of Public Schools under the Constitution” stated: “The Gospel of Jesus Christ prescribes the wisest rules for just conduct in every situation of life. Happy are they who are enabled to obey them in all situations!”  Being the “Father of Public Schools under the Constitution” Benjamin Rush confirmed his belief in the need for Biblical training when he made this statement: “The Bible, when not read in schools, is seldom read in any subsequent period of life… [T]he Bible… should be read in our schools in preference to all other books because it contains the greatest portion of that kind of knowledge which is calculated to produce private and public happiness.”  I could continue with quotes from the Founders concerning their belief in the importance of Christian principles not just in private lives but public lives AND the foundational principles of government, but I believe that the point has been made and as we continue in this study it will become clear, despite what revisionist historians have stated, that this belief was their foundation and it should be our foundation as well.

Many pastors I have spoken with have no problem with the so-called “separation of church and state” and have even told me that it was in our Constitution.  Because we no longer teach our Constitution in our schools and we, the pastors, do not teach the importance of who we are and where we came from, we have come to the point where we believe what we are told by academia concerning our Founding Fathers and the Constitution and have been led down a path of falsehoods and deception.

It has been long said that if we forget who we are and where we came from, we will not know who we are or where we are going.  There are many forces out there determined to remove all vestiges of our religious history.

Our Founding Fathers knew that there was to be involvement by the church and allowed the influence of Christianity to be prevalent.  The only “separation of church and state” that the founders wanted was an institutional separation.  They designed our Constitution so that the government would have no say whatsoever in the exercise of religion by the people.  Today’s government has turned that around 180 degrees and is now using what used to guarantee freedom of religion to the removal of religion from the public square.

Will we let it continue?
It is now the choice of We the People.