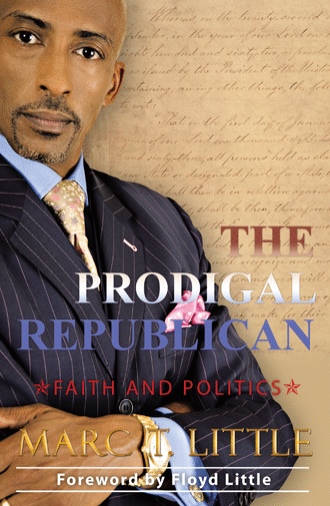 I am a man raised by a single mother and fathered by a college athlete, who went on to fame and fortune in the National Football League.

I am a man born out of wedlock to a young mother, a courageous single parent who worked two jobs to put me through private high school and college.

I am a man shot and left for dead outside my college apartment by a murderous gang member nearly my own age and of similar background.

I am a man married to a beautiful and intelligent black woman who stuck with me even after the gang member’s shotgun blast left me with only one leg.

I am a man who graduated from USC undergrad and law school and built a successful career as an attorney and entrepreneur. I am a man of deep Christian faith.

And I am a man who respects and appreciates Sen. Barack Obama, but did not vote for him in the 2008 Presidential election because his values are not mine.

I am proudly a black man.

In The Prodigal Republican, I call upon millions of other thoughtful black Americans who share my conservative family values and Christian beliefs to return to what makes us great as a people.

If the Rev. Martin Luther King Jr. were alive today, I believe he would join me in this call. The values of the Democratic Party of the 1960’s are closer to those of today’s Republican Party than the modern-day, ultra liberal Democrats for which the black community lends all of its support.

The Prodigal Republican, published at an historical moment, comes after an election of great significance, both real and symbolic. As a black man, I am proud of Mr. Obama’s candidacy, his service to the State of Illinois, and his commitment to his wife and children. I respect him. I am not anti-Obama. In fact, I get a tremendous sense of pride when I see the First Couple represent the success of the American Dream around the world as people of color. I even pinch myself to make sure it is not a dream. As a country, we accomplished a great thing by electing Barack Obama as the President of the United States. However, Mr. Obama did not get my vote in the 2008 presidential election.

I vote according to my Christian values, not the color of my skin.

In May of 2008, I co-hosted a fundraiser for Senator John McCain in Los Angeles, California. My wife, Tegra, and I were waiting in line to be photographed with Sen. McCain when we were approached by Sid, a prominent local attorney. Sid said that “as a Jew,” it was tough for him to be a Republican, and then he asked me how I, a black man, had the courage to be at this event.

This was a common question but with an easy answer. I said that my goal in voting in any election is to support candidates who will create a better, more moral society for the next generation. I said that I did not believe Mr. Obama would further my hopes and prayers for the future of the United States.

My Judeo-Christian values inform my politics. The future of our nation is far too important for skin shade to be the deciding factor in choosing a candidate. There was a time when good ole family values were front and center in our political dialogues. There was a time when we wanted to know a candidate’s view on a fetus’ right to life, how belief in God would impact Presidential decisions, whether or not the candidate supports same-sex marriage or whether the candidate supports stem cell research.

Yet, during the 2008 Presidential campaign, such moral concerns were heard as rarely as prayers in public schools. The Democrats seemed capable of reaching a religious fervor only on the subject of global warming.

We are one nation under God, yet God seems to have been banished from political platforms. My faith and my moral values still govern my vote. In this book, I will call upon like-minded Americans, black, brown and white, with Christian values to join me in re-coloring the Republican Party, the political party that historically has been guided by the values that most conservative black Americans hold dear—whether they realize it or not.

Like Europe [and the Europeans who adore Mr. Obama] America is devolving into a secular culture. During the 2008 campaign, Democratic strategist Donna Brazile claimed that her candidate’s position on abortion (e.g. Barack Obama) was “not important.”

Mr. Obama waved off legitimate questions about abortion and the value of human life as “above my pay grade.” He did the Liberal Politician’s Waltz around those and other moral issues that Christians, black and white, care about deeply. While I believe Mr. Obama is a Christian as he professes, I could not vote for him and trust the future of my grandchildren to his liberal, secular policies.

This nation’s first black President should set a standard for all future leaders, black or white. What good will come to black America for electing an unqualified black man who will lead the greatest nation on earth to ruin?

Like the prodigal son in Scripture, far too many black Americans have left home. The great majority of blacks in the United States vote Democrat. Yet most of them have conservative Judeo-Christian values more closely aligned with Republicans. Why do socially conservative black Americans cast their votes for the liberal party? As this book notes, I believe some are in a far off country, blinded and misguided.

The goal of this book is to remind older readers and inform younger ones of the historical relationships between blacks in America and each of the two primary political parties and to encourage us all, white and black alike, to return to traditional values so that we may all, the black community in particular, be restored - not to a political party but to sound minds. The principles that I try to articulate in this book apply to everyone.

As you read, I don’t expect any reader to agree with any or all of my opinions. If you read and determine that you don’t agree with me, that’s a good start. You did some reading. Just be sure to think; think about the issues, think about how to make your family and your community better, think about aligning your thoughts, beliefs and values with your vote. If you do this, then I will have accomplished my goal and for that I would be grateful.

And finally, after you ask, how can I be a conservative and a Republican, consider this: (1) No Democrat or Republican is lobbying blacks for their vote. The Democrats assume it and the Republicans generally don’t believe they can get it in large enough numbers to matter (although the black vote landed George W. Bush back in office in 2004). (2) What good does it do the black community to have no one who can influence a Republican administration? Why only sit on one side of the fence? How can we win anything for our communities if we only bark on one side of the door? Our voices must be heard in all the rooms of power and at every table of influence. (3) When I write my checks to the Republican National Committee, I am invited to an audience with the President of the United States four times a year and to multiple events for national elected officials and others. When most of my Democrat friends write their checks, they don’t even receive a thank you. Their contribution is one of thousands of people who like them and not unique. Blacks must understand how to leverage themselves. Take advantage of being the only person of color in the room – which is often the case for me. So what! If I can help somebody (e.g. my community) as I pass along, then my living shall not be in vein said the psalmist.

The Prodigal Republican chronicles the historic relationship between blacks, Democrats, and Republicans. It is based on three topics: voting your values, family leadership, and Christian faith, all geared toward strengthening the American family generally and the black family in particular.

The Prodigal Republican encourages everyone to return to core values by being self-reliant and realizing that government aid is never a pathway to prosperity; by promoting the sanctity of human life; and by favoring traditional marriage to perpetuate humanity.

The Prodigal Republican is a guide to strengthen the family through a common-sense approach by avoiding teen pregnancy before marriage, graduating from high school and university or trade school, considering marriage, and having a work ethic.

More than twenty years ago, Marc T. Little said “yes” to life after a gang member tried to end it; instead, the gunshot took his right leg, propelling him to destiny. Now through his work as a lawyer, entrepreneur, community builder, and church administrator for more than a decade, he teaches others how to say “yes” to life.

Little earned his Bachelor of Arts in broadcast journalism from the University of Southern California in 1987 and his Juris Doctorate from the Gould School of Law at USC in 1994. His own firm specializes in entertainment transactions. His pursuit of higher education continues at Fuller Seminary. Little also works on various boards and commissions focusing on family preservation and poverty.

Son of a single mother and Pro Football Hall of Famer Floyd Little, Marc desires to make a positive difference in his community; he is unwilling to allow anyone else to dictate his destiny. He believes that by doing so, he motivates himself and others to say “yes” to life.