The Consequences of Choice 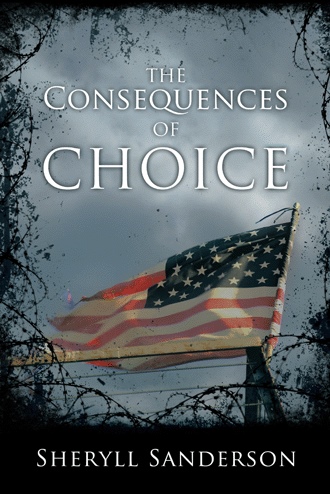 They rode in silence for the rest of the trip home, but the thoughts and fears that ran through their minds were all the same, the government had only one goal and that was to control the people and possess everything they could get their hands on. Steve pulled the truck into the driveway and drove slowly down the half-mile lane. As they pulled into the front of the house, the headlights bounced across the yard and cast its light on a shadowy figure quickly dipping behind the southwest corner of the house. “What was that?! Did anyone else see it?”

“Now you’re really scaring me Steve, what are you talking about?” Tanya straightened up in her seat and squinted, trying to peer through the darkness at what her husband was talking about.

Steve stopped short in front of the house and slammed the truck in park. “Stay in the truck and lock the doors.” He reached under the seat and pulled out his revolver and slipped quietly from the truck.  As he stared hard into the darkness toward the side of the house where he had spotted the shadow another movement in the dark caught his attention, “Freeze!” Steve shouted.

A voice shouted from the end of the house where Steve was focused. “We don’t mean any harm!”

“Who is ‘we’ and what do you want?” Steve called back.

“We’re looking for someone!   I was told she would be here!”

At this announcement Sandy’s heart leapt in her chest. “Connelly,” she whispered. She pushed her way from the backseat of the truck and tumbled out after Joe. “Connelly! Is that you?”

Romans 15:5-6 “May the God who gives endurance and encouragement give you a spirit of unity among yourselves as you follow Christ Jesus, so that with one heart and mouth you may glorify the God and Father of our Lord Jesus Christ.”

A new government and a new beginning—free of financial and healthcare worries. That was the promise to the country.

The changes are subtle at first, but the people soon learn that promises made for the good of the country are not what they expected. The government that once swore to care for its citizens has revealed its true colors.

Our military returns home from the war by order of a government they do not understand to a country they do not recognize. However, one soldier will not be coming home.

While Sandy Parker struggles to cope with her loss, care for her two sons, and run the small family ranch, Tom Connelly and Kyle Johnson make their way to the small town of Willow Creek—their objective, deliver a message to the wife of their fallen brother-in-arms. The arrival of the two soldiers could not have come at a better time and Sandy and her family realize that God’s Hand is at work in bringing them all together. Friendships are made, and bonds are strengthened as they begin a journey to find others, like themselves who still believe in their country and have faith that God will bring them through the inevitable war that will be waged on the good citizens and faithful Christians of the United States… a war with only one viable outcome. Some will pay the ultimate price to defend their beloved country and deliver their loved ones from an enemy that will go to any length to get what it wants.

Sheryll Sanderson, like so many others, has felt the pain of loss. While her sons were still very young, she lost her husband. With the help of family and friends, she raised her sons and tried to keep God and country as the foundations of their lives. Both sons grew up and enlisted in the United States Marine Corps, where they served their country in Iraq, Afghanistan, and other places far away from home. Through prayer, prayer support from her church and her faith that God would bring her boys safely home, Sheryll made it through those difficult years. Sheryll is a legal secretary for the State of Florida and currently lives with her husband and two dogs. She is a member of Cornerstone Christian Church in Vero Beach, Florida.