Lady and the Sea

A Novel Based on a True Story 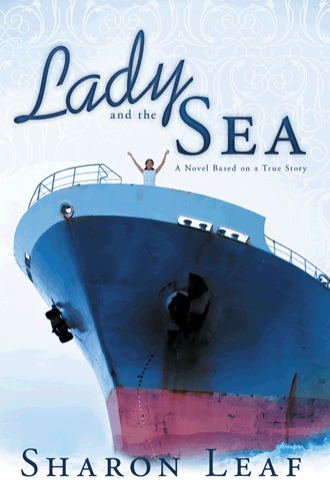 Chapter One Within minutes of entering the Haifa harbor, an Israeli gunboat sped from the port and circled the World War II vessel. Two soldiers aimed their deck-mounted machine guns at the MS Restoration. An Israeli soldier shouted instructions through a loud speaker in his native Hebrew. The Captain of the MS Restoration responded over the ship's radio, "Please, speak to us in English!" Rosie instinctively pounded her fist on the rail. "Who do they think we are, terrorists?" Jesse touched her arm. "Rosie, calm down." "Do they think we're pirates? What are they going to do?" "Just calm down," her husband repeated, holding out his hand. "They won't make us jump overboard, will they? I don't have my life jacket!" "Rosie, you must get hold of yourself." Her mind raced as she gazed up at the man who had brought her on this unpredictable journey. Jesse's right, what's come over me? Rosie asked herself, all the time wishing she didn't have to go to the bathroom. The ship, the crew, the special passengers--the Russian Jews--had finally reached their destination. No more troubled waters. No more hurricanes. No more delays. On this hot July morning, they were home free, or so they thought. Rosie looked at the crew, poised and ready to hit the deck. "Isn't this ironic? We've traveled half way around the world on this ship, and this is the welcome we get." "Stop your engine!" the soldier shouted. Captain Alain immediately gave orders to the first engineer to halt the engine. Within seconds, they were stopped dead in the water. Rosie's stomach churned, so she hung her head over the side of the ship and let it rip. After wiping breakfast off her mouth with a hankie, she grabbed hold of Jesse's arm. Find your happy place, she told herself. Rosie had heard stories about people who had experienced close-call situations. Her seventy-year-old father once told her about the time his ship almost went down in the China Sea during the war. "At that moment, my whole life passed before me." Now, as the Israeli soldiers glared at the Restoration through their high-tech binoculars, Rosie knew this was her moment.

After two failed marriages, forty-eight-year-old Rosie Atkisson struggles through the process of rebuilding her life with her husband, Jesse, in Southern California. But in 1994, the settled rhythm of her newfound comfort is interrupted by a tug in her heart when she encounters a haunting photo of another aging lady, the World War II vessel MS Restoration.

A special mission to transport Russian Jews from Sochi, Russia, to Haifa, Israel, means an adventure of a lifetime; does she dare pass up this dangerous assignment that will take her thousands of miles from her family and comfortable life? In spite of her fear of water and the unknown condition of the ship, Rosie thinks this might be the opportunity she’s been waiting for to serve God.

After surviving fourteen months on board the old ship—from a hurricane to a heart attack, from miracles to menopause, and now being held at gunpoint in the Haifa harbor—Rosie wonders if she will ever return to her own safe harbor.

Since turning forty, Sharon Leaf has traveled to over fifteen countries, including living in Sweden while attending Bible college, traveling on the Trans-Siberian Railway, and volunteering on a World War II ship, whose sole purpose was to transport Russian Jews from the Black Sea to Israel. She received a degree in theology at sixty, proving that it's never too late to fulfill another dream. Lady and the Sea is Sharon’s debut novel. Sharon lives in South Carolina with her husband.